Another weekend with an ideal weather forecast, so I could not stay home. This time, I searched for companions for my multi-day hike ideas, but I found no one, so I split my plans into two separate hikes.

Snowshoeing in Mären on Saturday

My snowshoes were sad for not being used for almost a year, and it even wasn’t me who used them the last time. The forecast said there is 30 - 50 cm of snow in the area above 2000 masl. That is the chance. 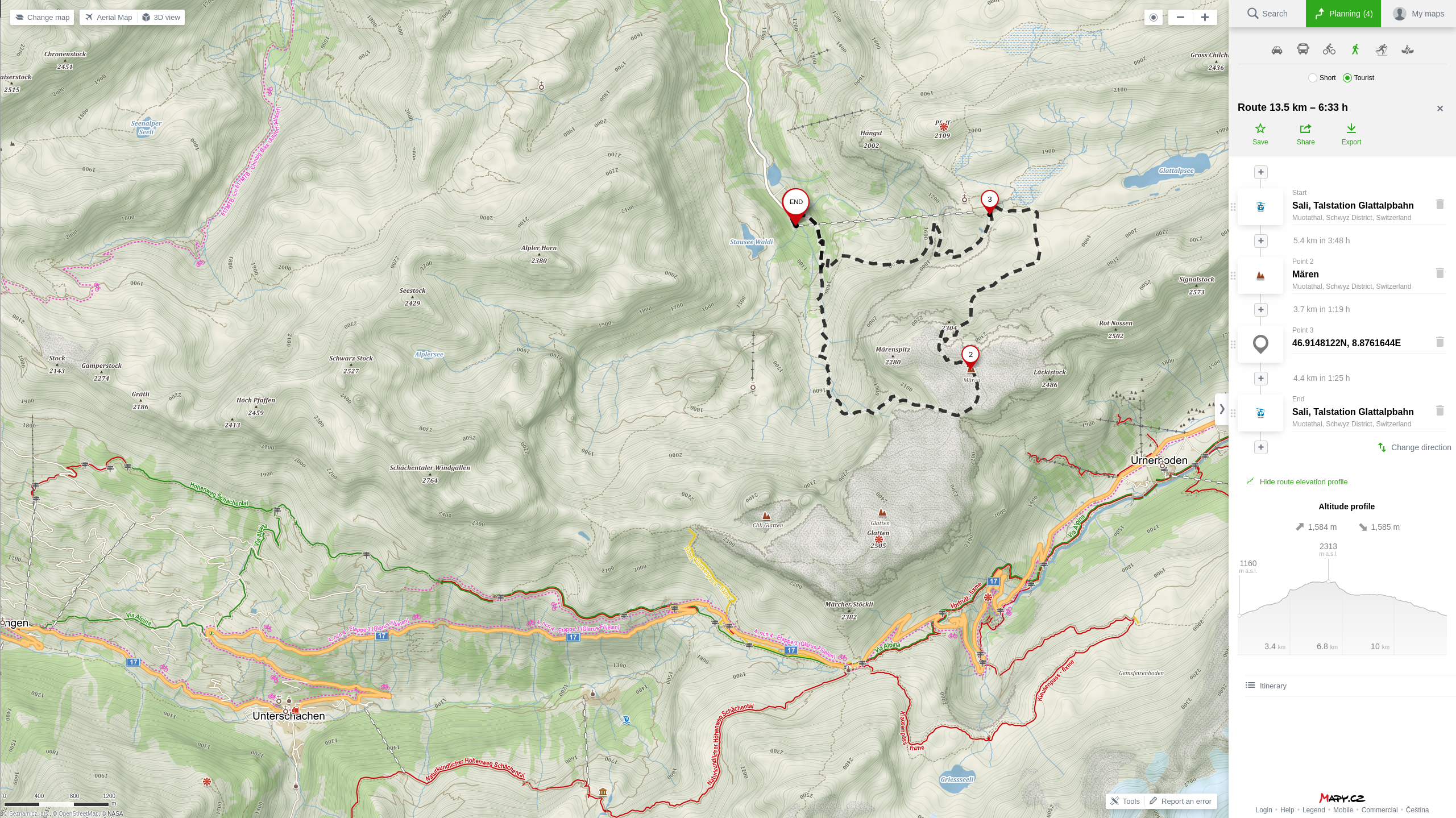 On the left side of the map, you can see a pink dashed bike road I took to Chingiz pass, on the bottom is Klausen pass where I swam in a glacier lake.

As days are becoming short, and I am unable to leave very early in the morning, I started hiking at 10:20 and knew, that I have just 7 hours of light for this hike. In the lower altitude, the kilometers of the nice trail were passing quickly. 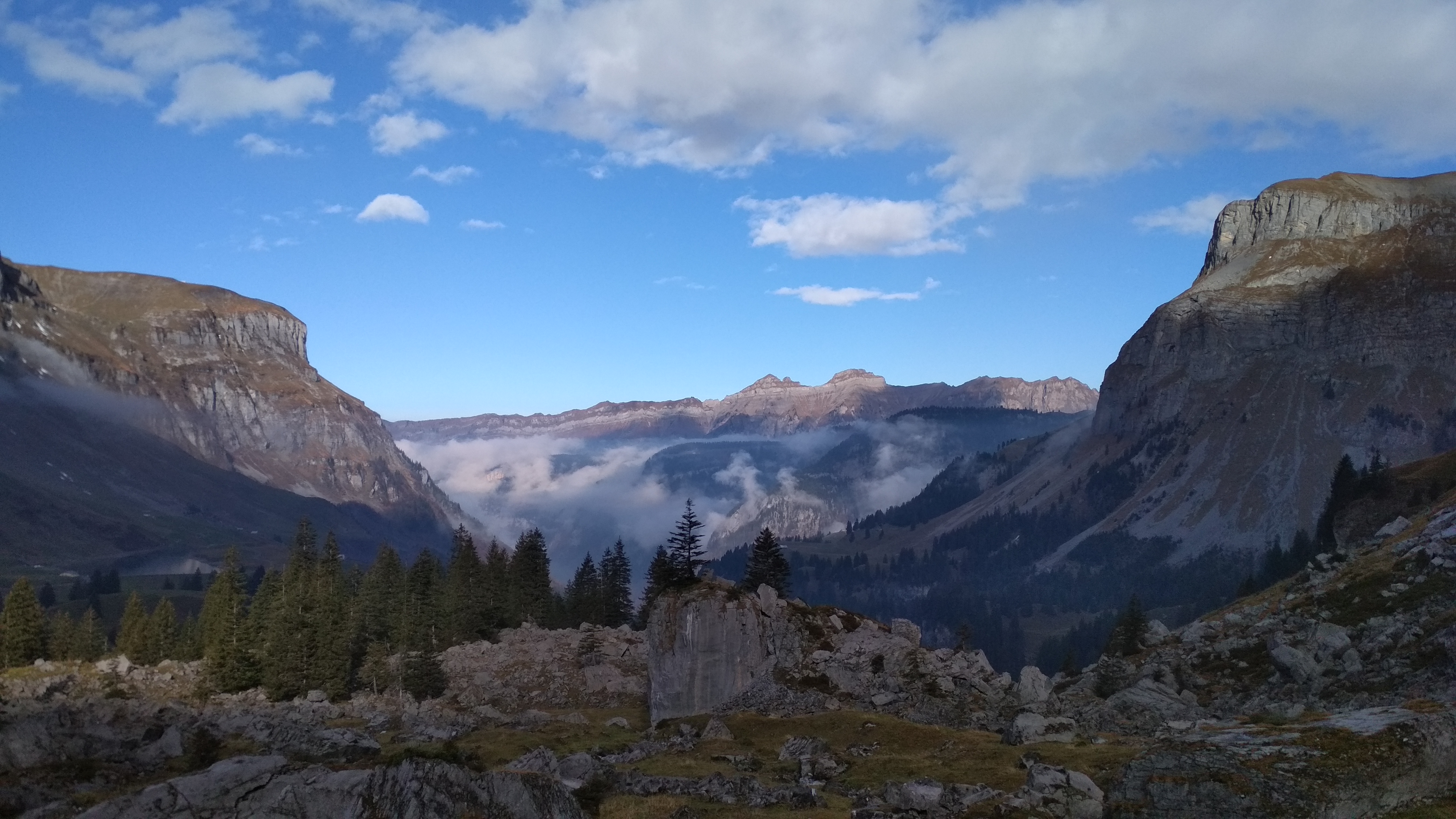 View back in direction of Muonthatal 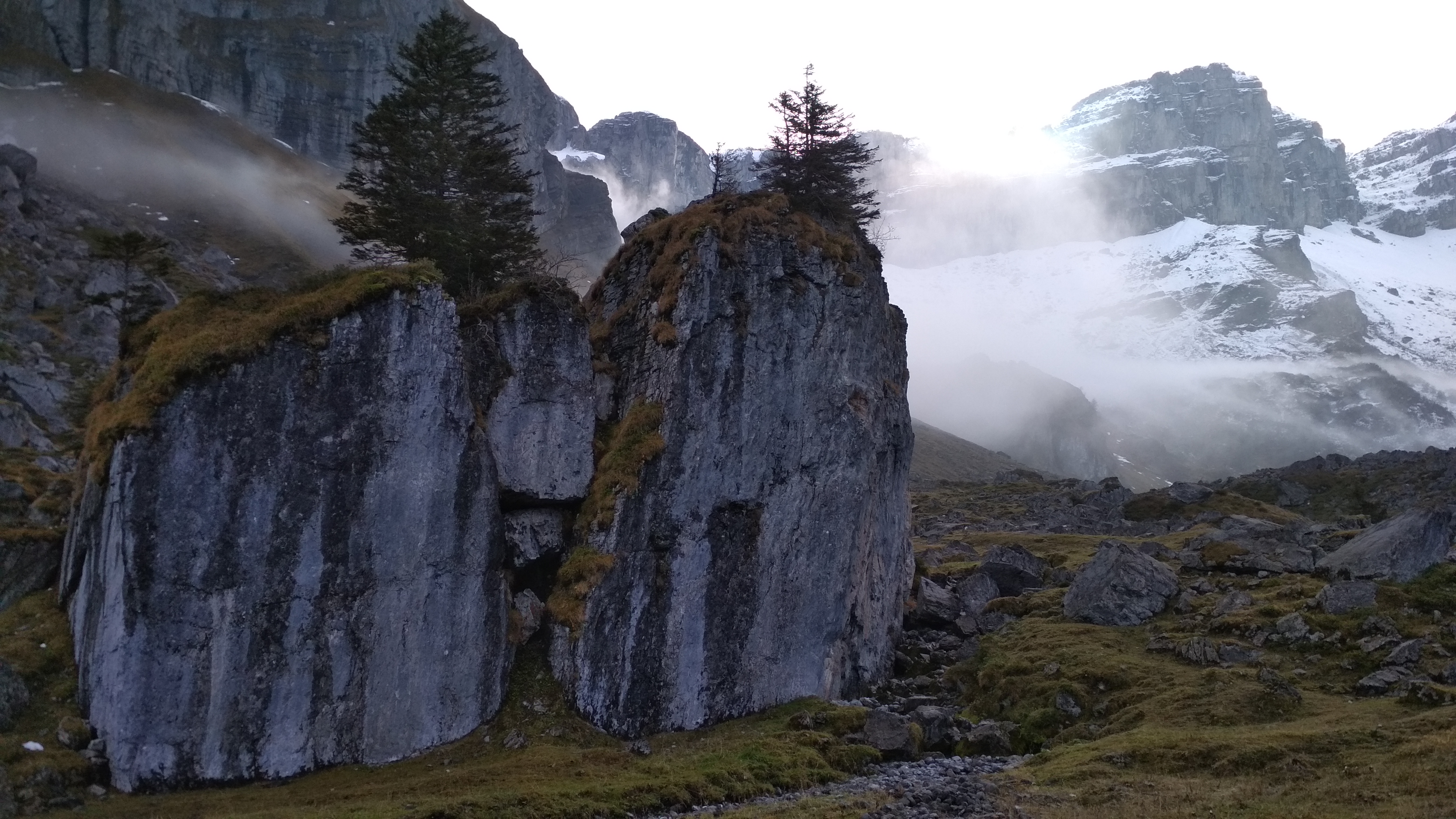 I went up this direction, still do not know, where will the track proceed up. Weather is still not perfect, but it is changing quickly.

The first signs of snow together with passing by the last cabin inside of huge cirque marked the increasing difficulty of the hike. Fortunately, the rope in the steepest part was still visible and not buried in snow, so I passed the only exposed and potentially dangerous few meters to get to snow valley biting into the Mären area. 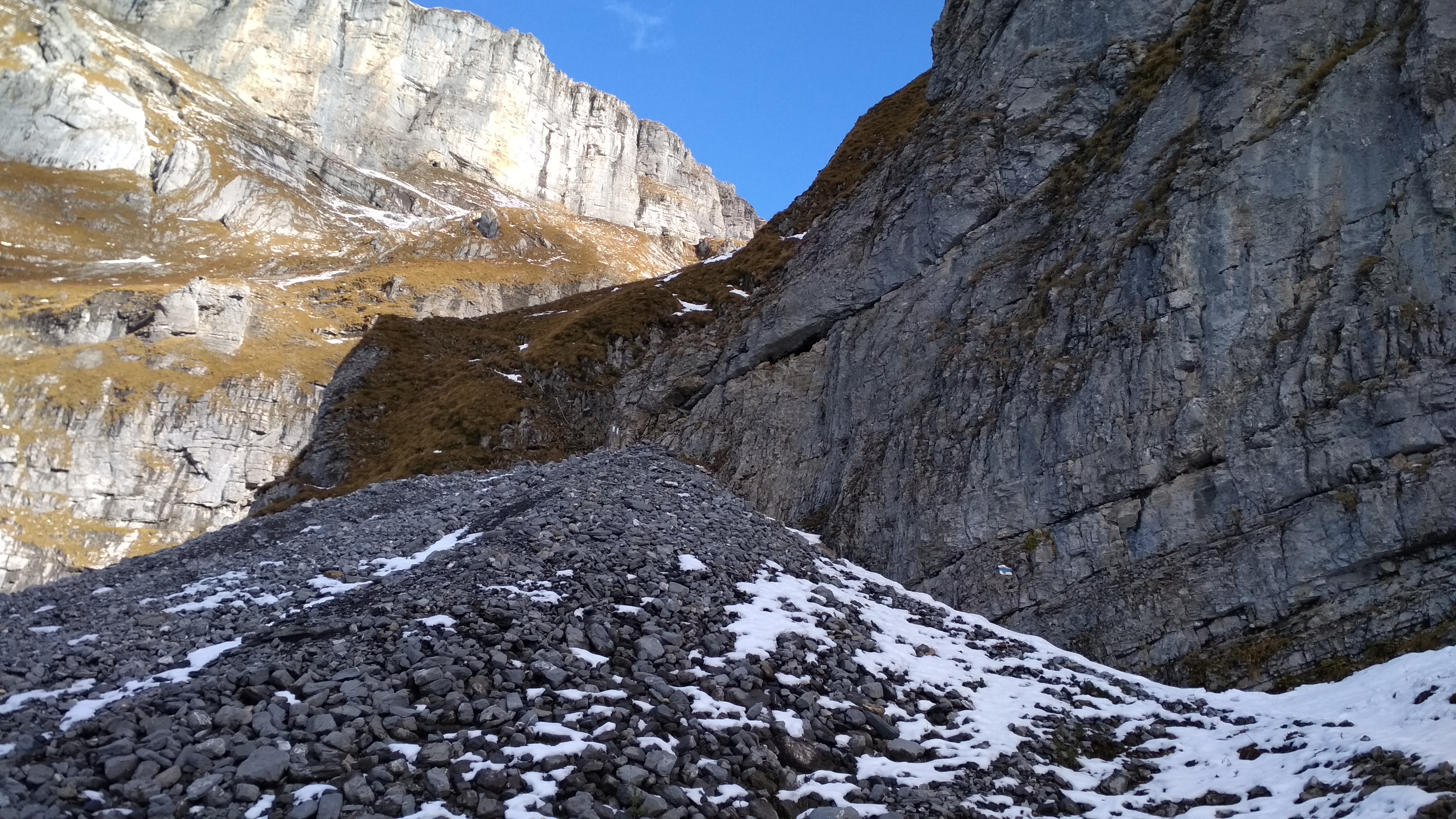 The only exposed area 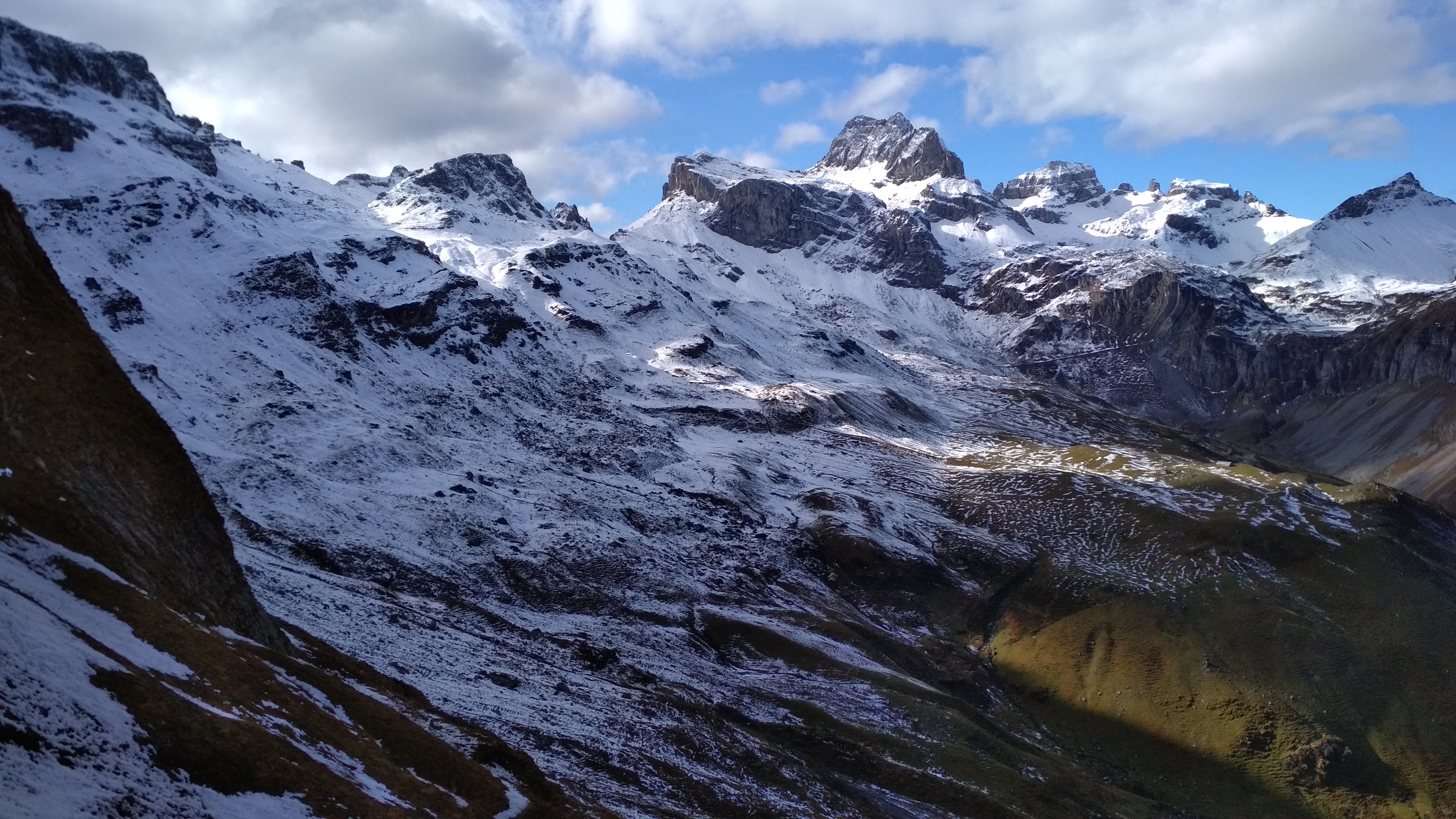 View back from above of the exposed part. 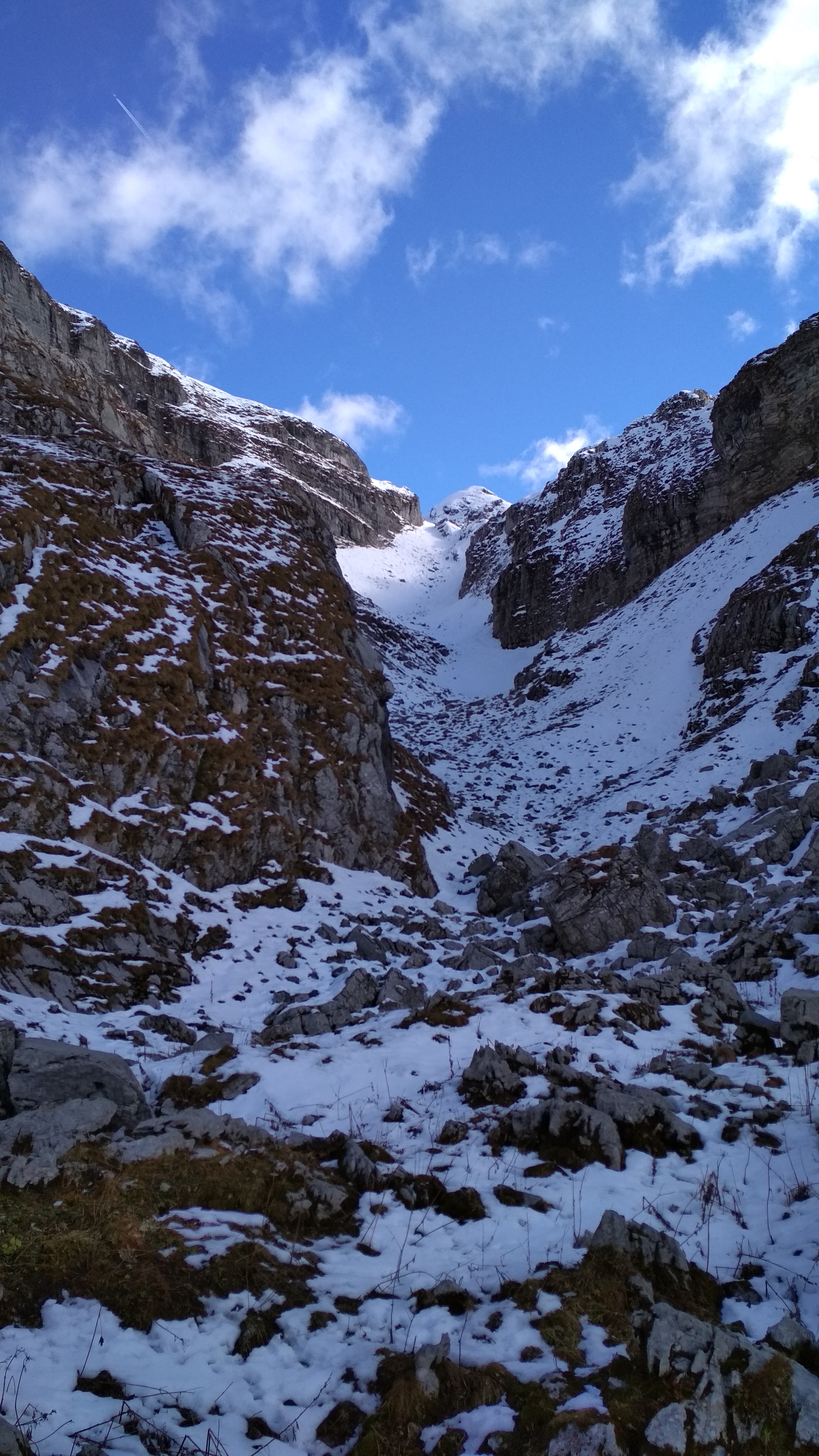 Time to put snowshoes on :). 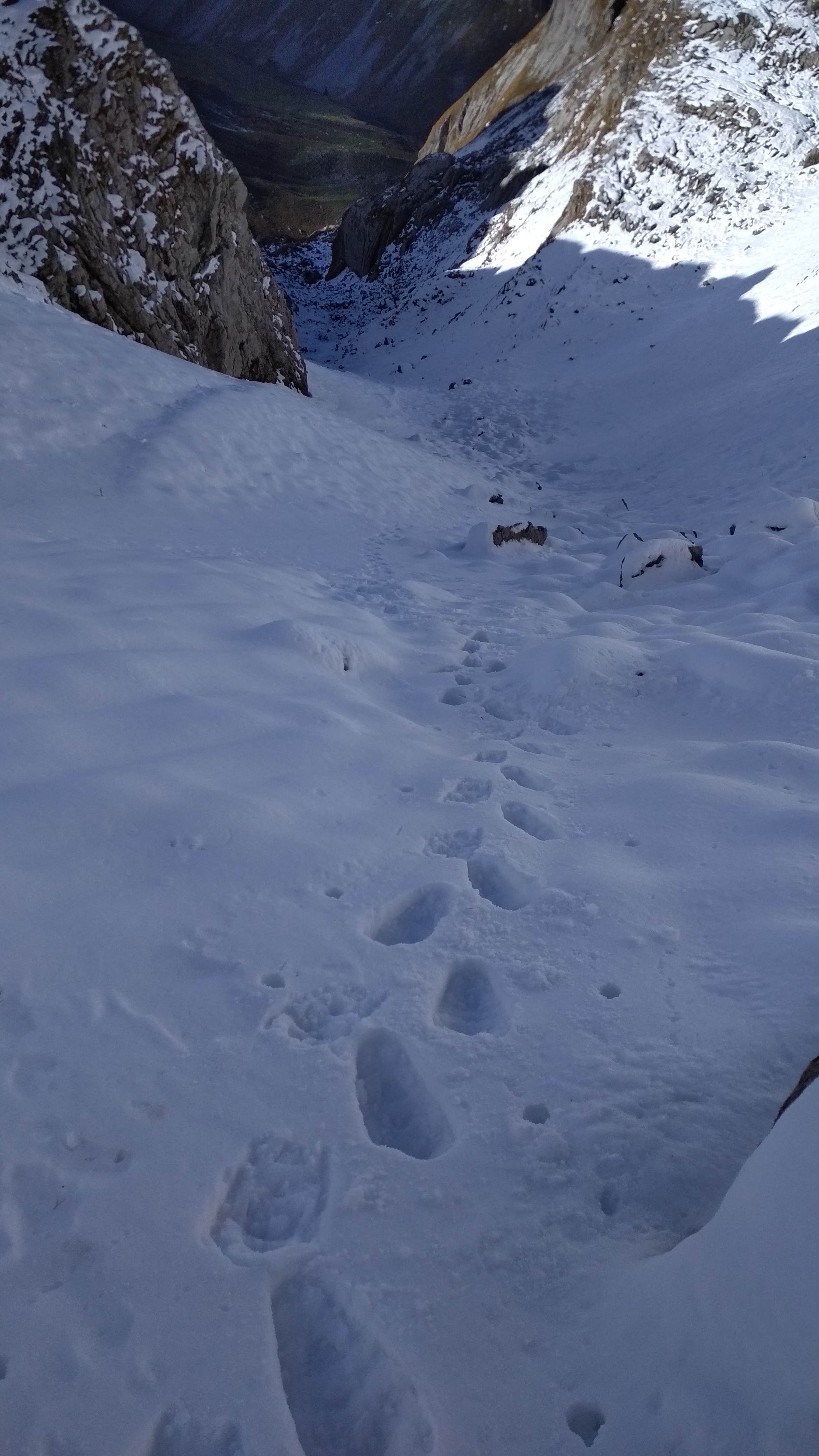 Hiking speed with snowshoes decreased to less than half, the snow was not powder, but also not firn yet. 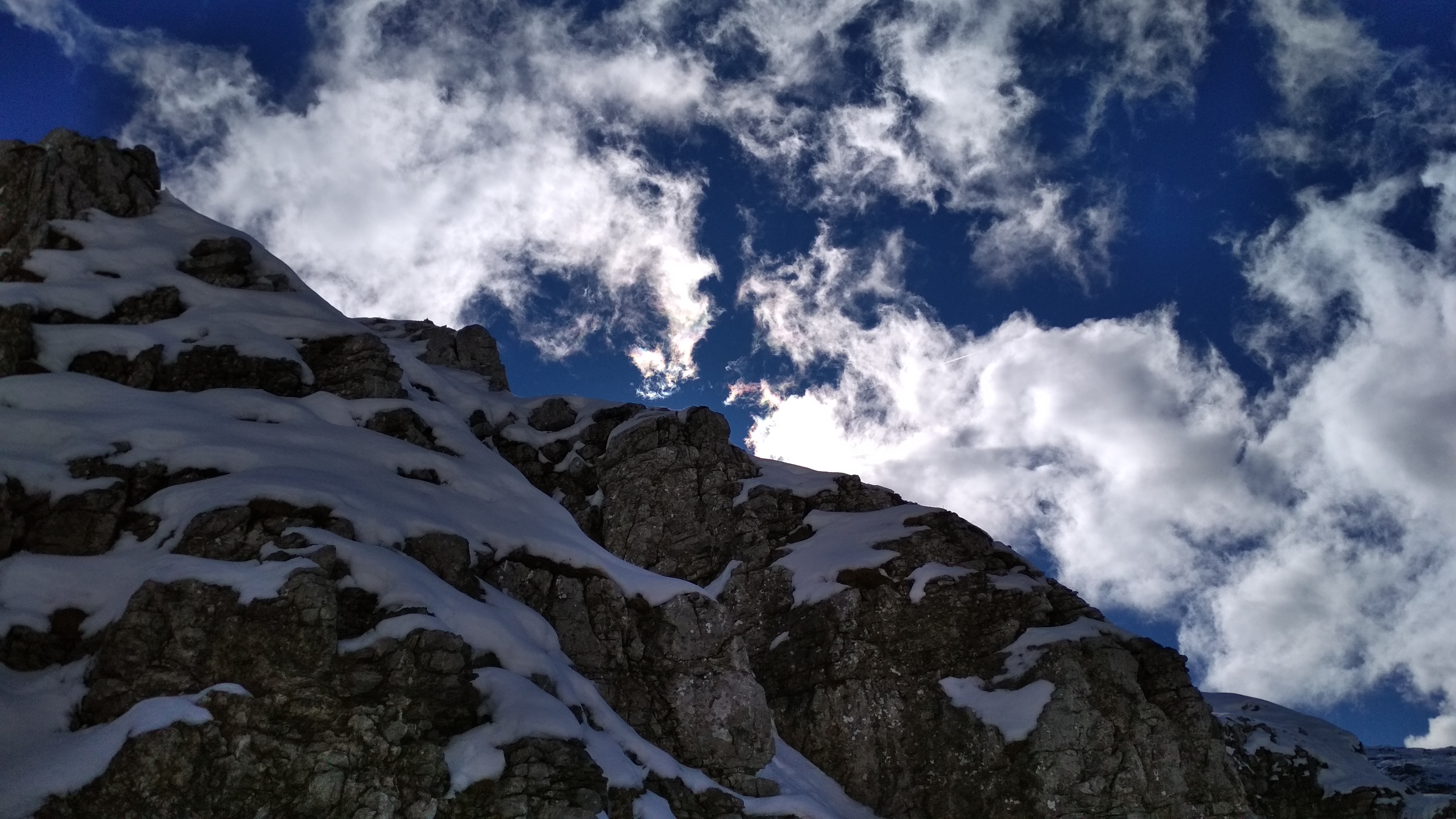 Any option reason to rest was welcomed, here I watched halo. 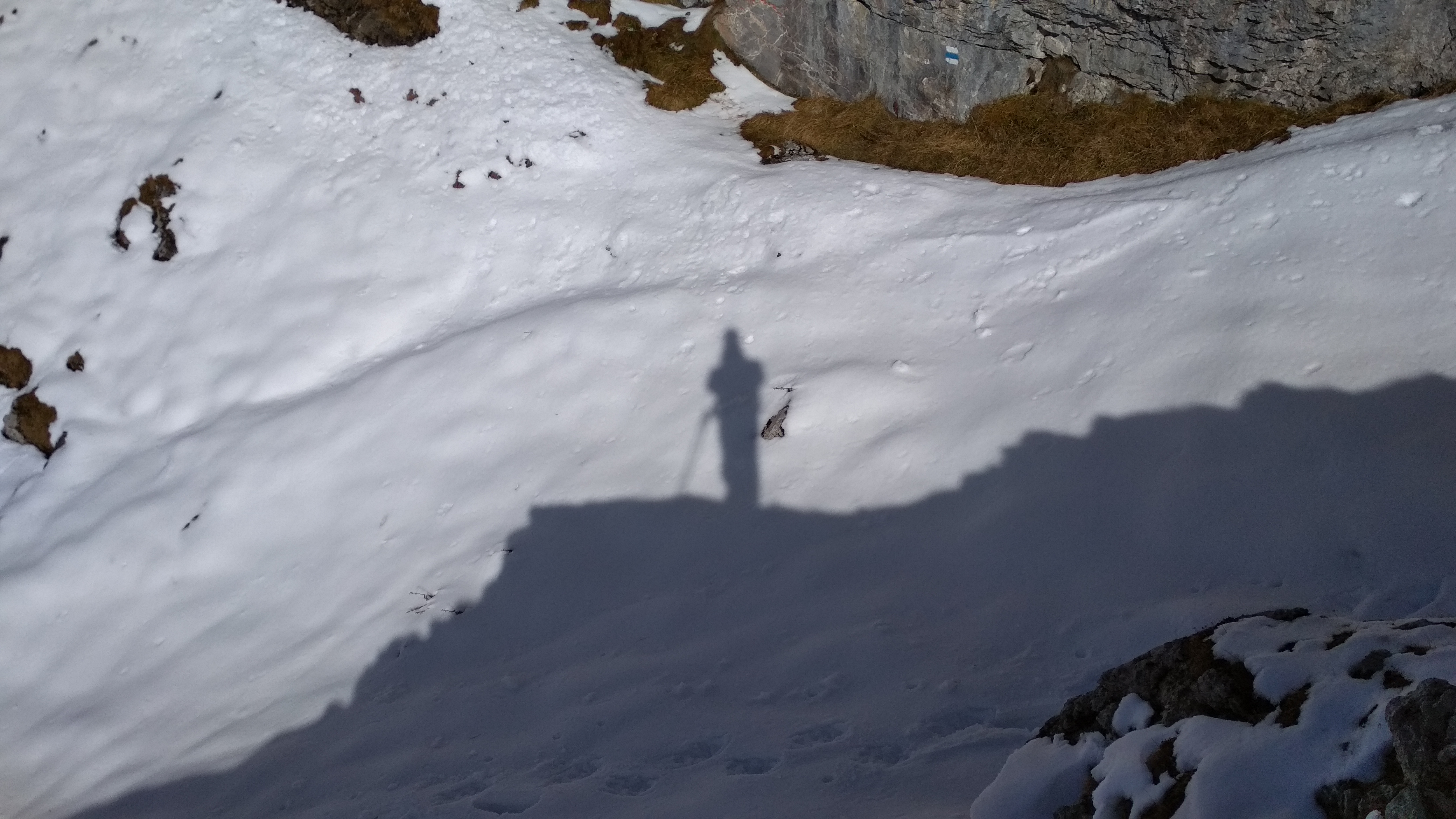 Again view back, but after reaching the plateau. 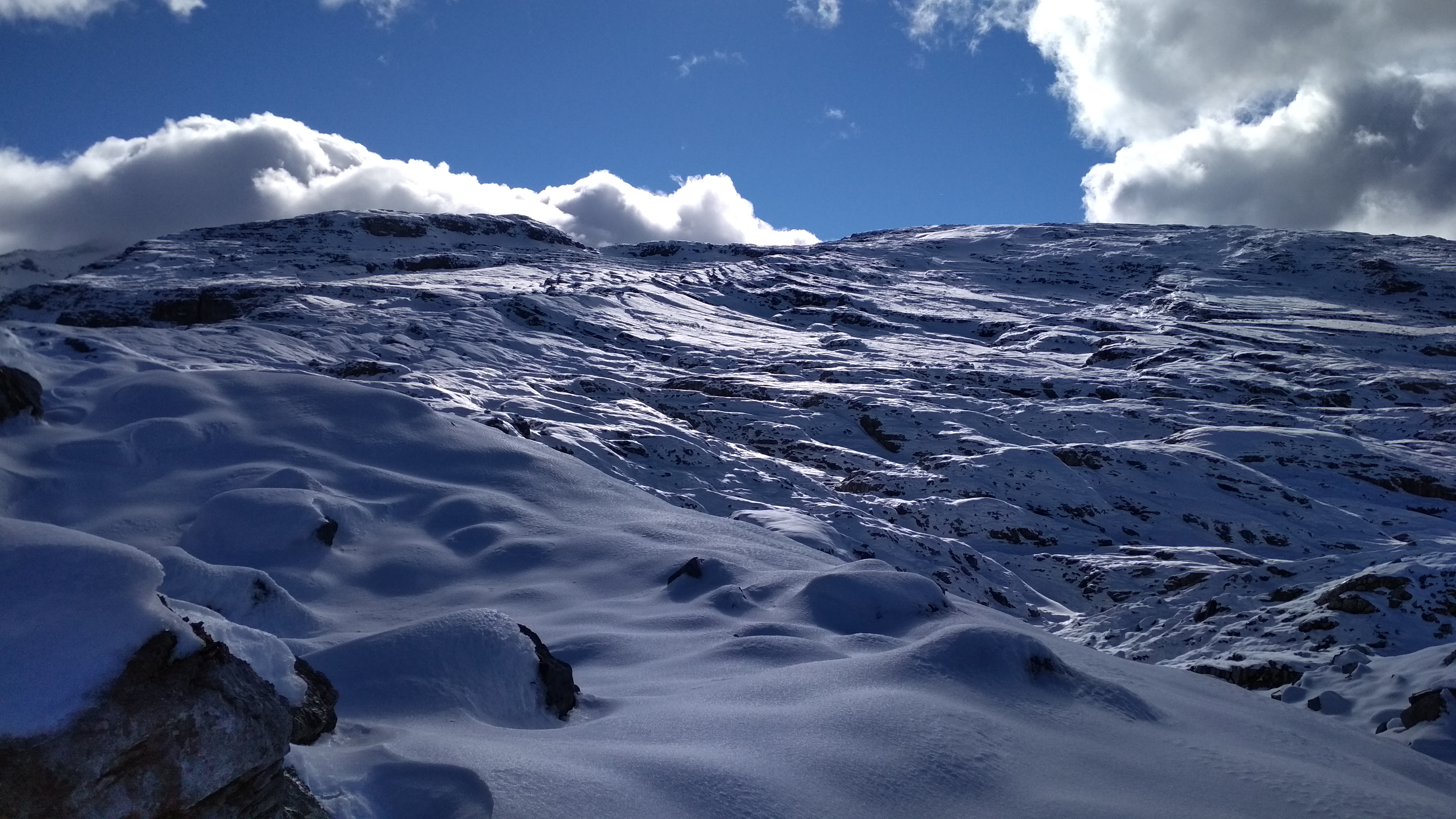 This is the Mären plateau. 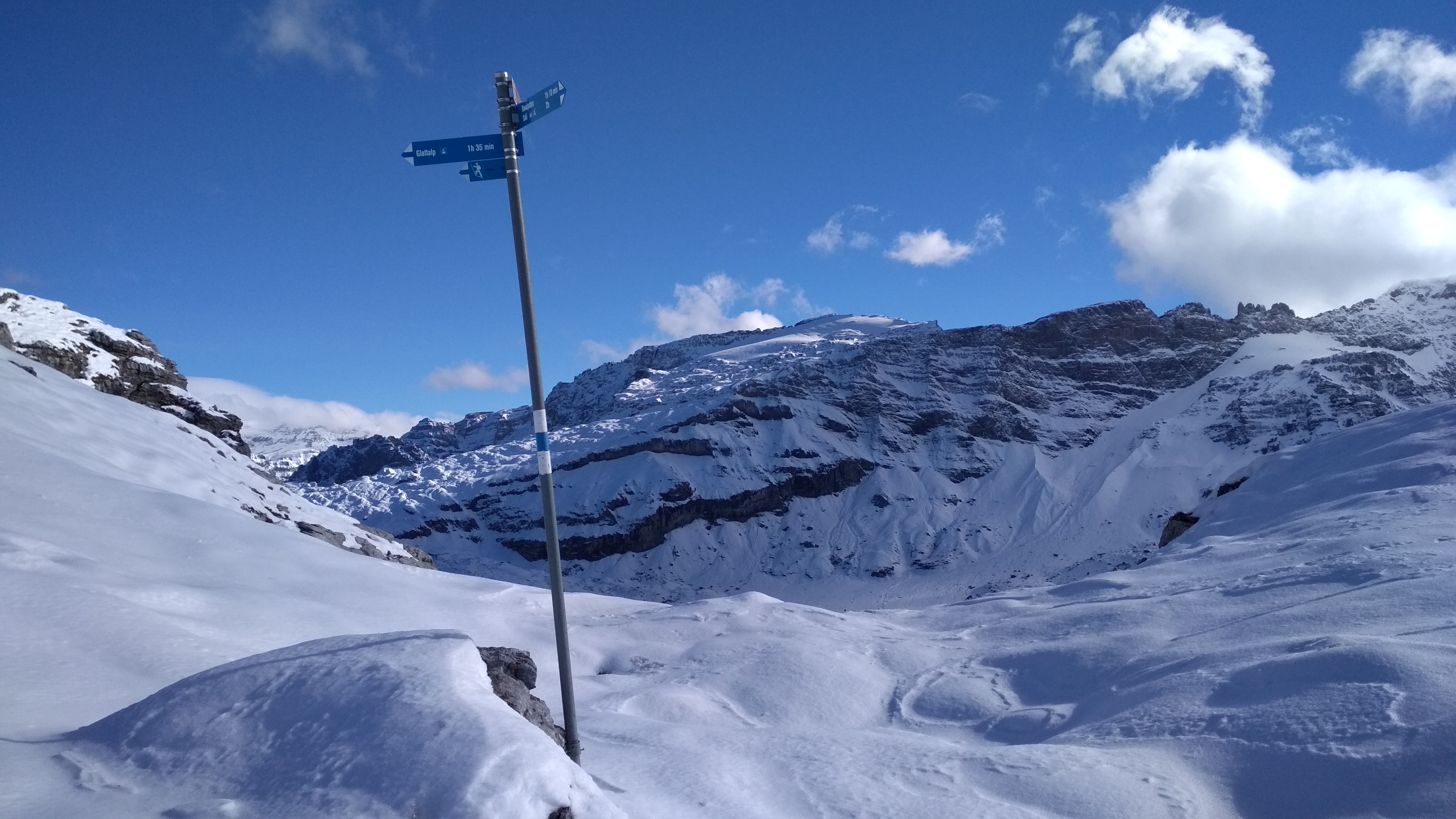 Finally the pass, my first goal is finished, most of the elevation is over, most of the snowshoeing is before me.

View in the direction of the Klausen pass. It is almost visible, where I was hiking with Tom.

Even though Mären is considered a plateau, the path was going up and down, especially when I had to search for the trail, as marking was often hidden in the snow. Some parts I went just based on direction from GPS.

Moon area - as someone called it on hiking websites I checked before the trip.

On the other side of the plateau, I was surprised to find someone else’s footsteps. The person walked without snowshoes, and as I learned soon, it was on the hike day before me in horrible foggy condition.

View from the highest point of my hike - Märenspitze 2304 masl. 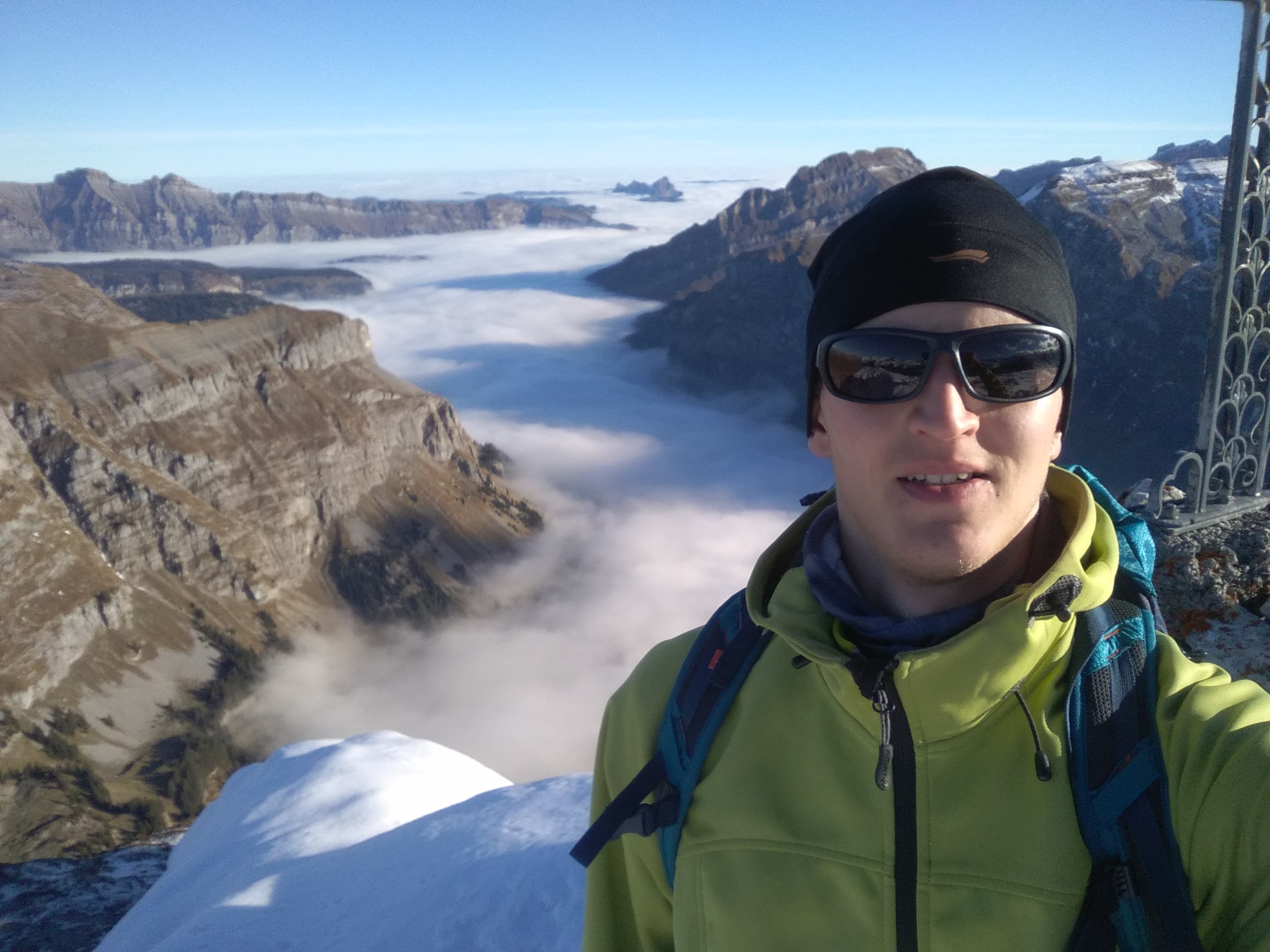 Haha, I am above the clouds and the weather in Zurich probably sucks.

I signed to the book, read a story of the snow steps and after short break quickly went down. It was 15:00. Thanks to snowshoes, I could walk down 500 meters in an hour on icy snow on the northern side. 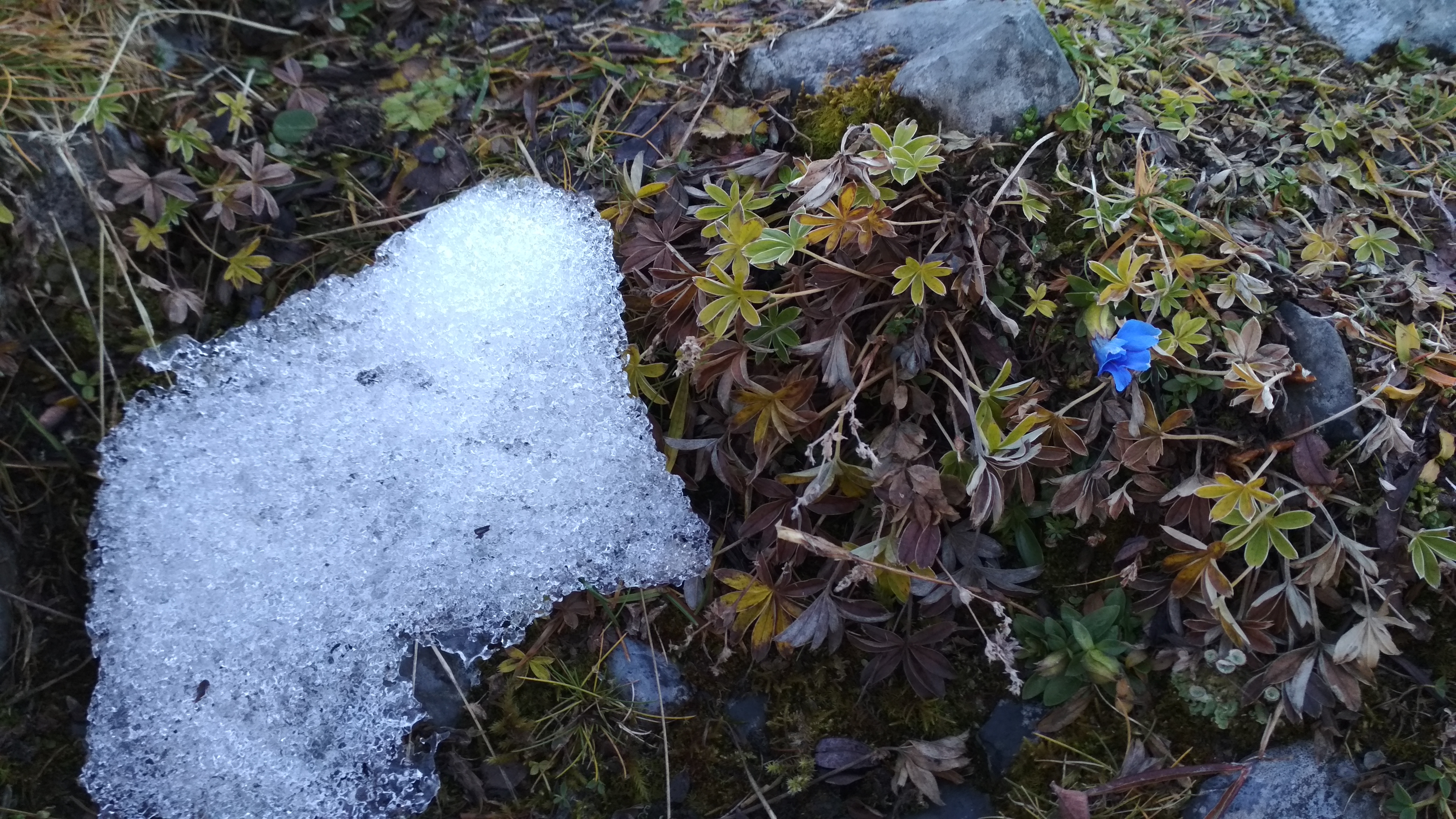 Surprising to find a flower in 2000 masl in November!

Autumn sunset has slightly different colors, but it is not visible enough on the photo.