I wanted to go on a two-day hike from 6-7th October, but it ended up in two separated trips.

Rigi is 1798 m high mountain between the biggest lakes in the region. It is visible from Zurich, and due to easy accessibility by train (to the top), it is a favorite destination for families and mainly Asians.

We started from Seebodenalp above Küssnacht at 1020 masl and hiked the way up. 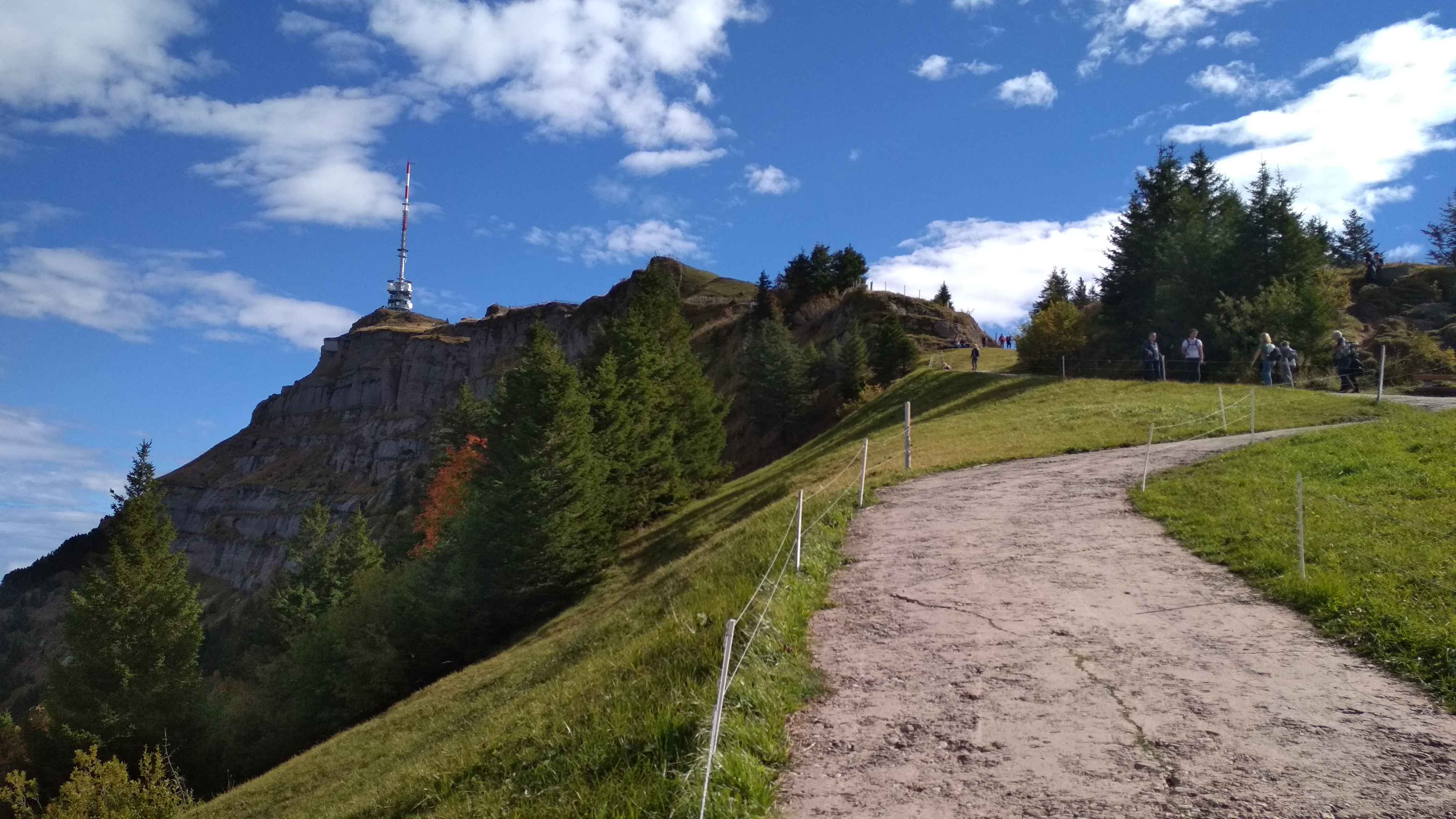 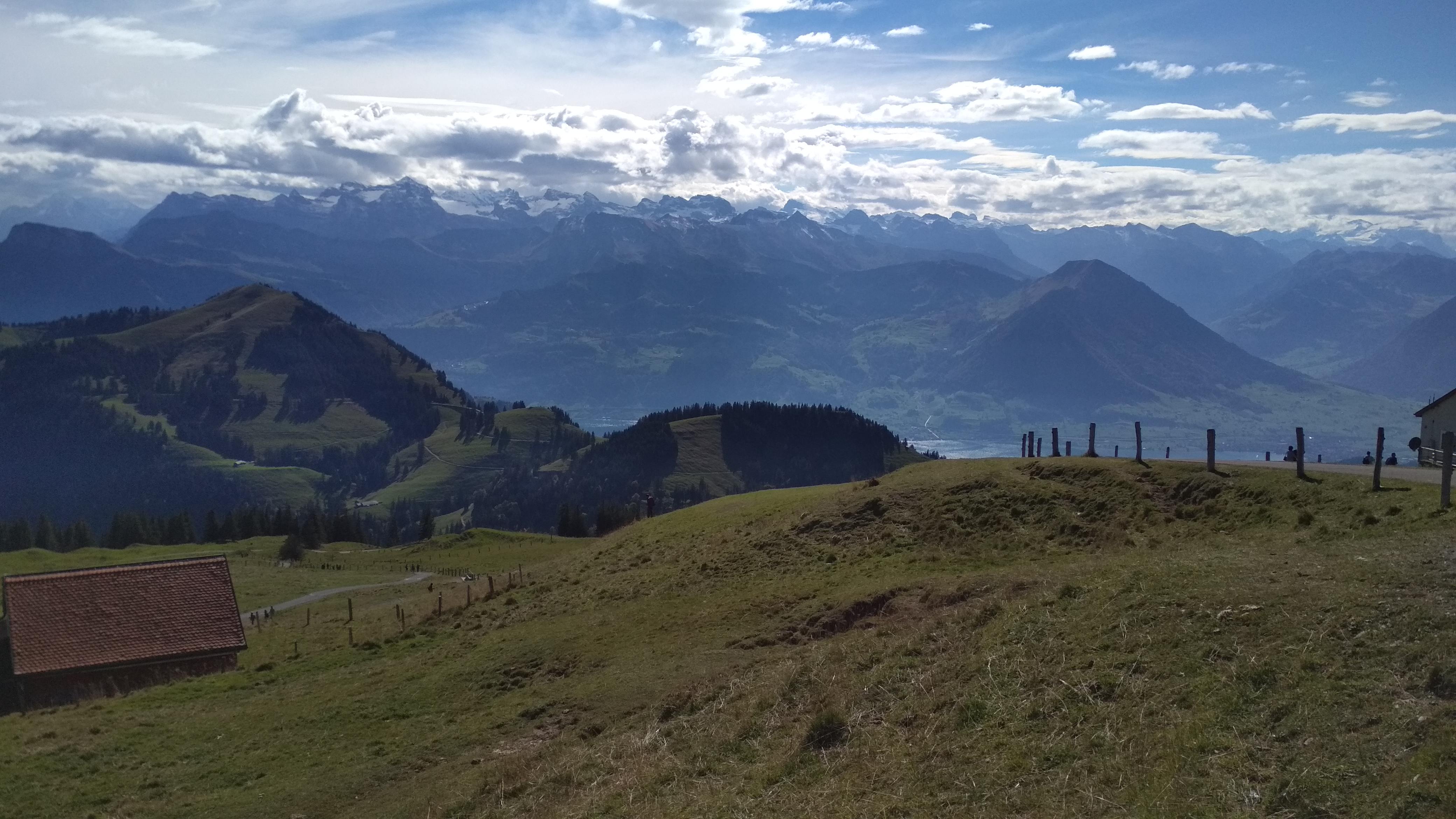 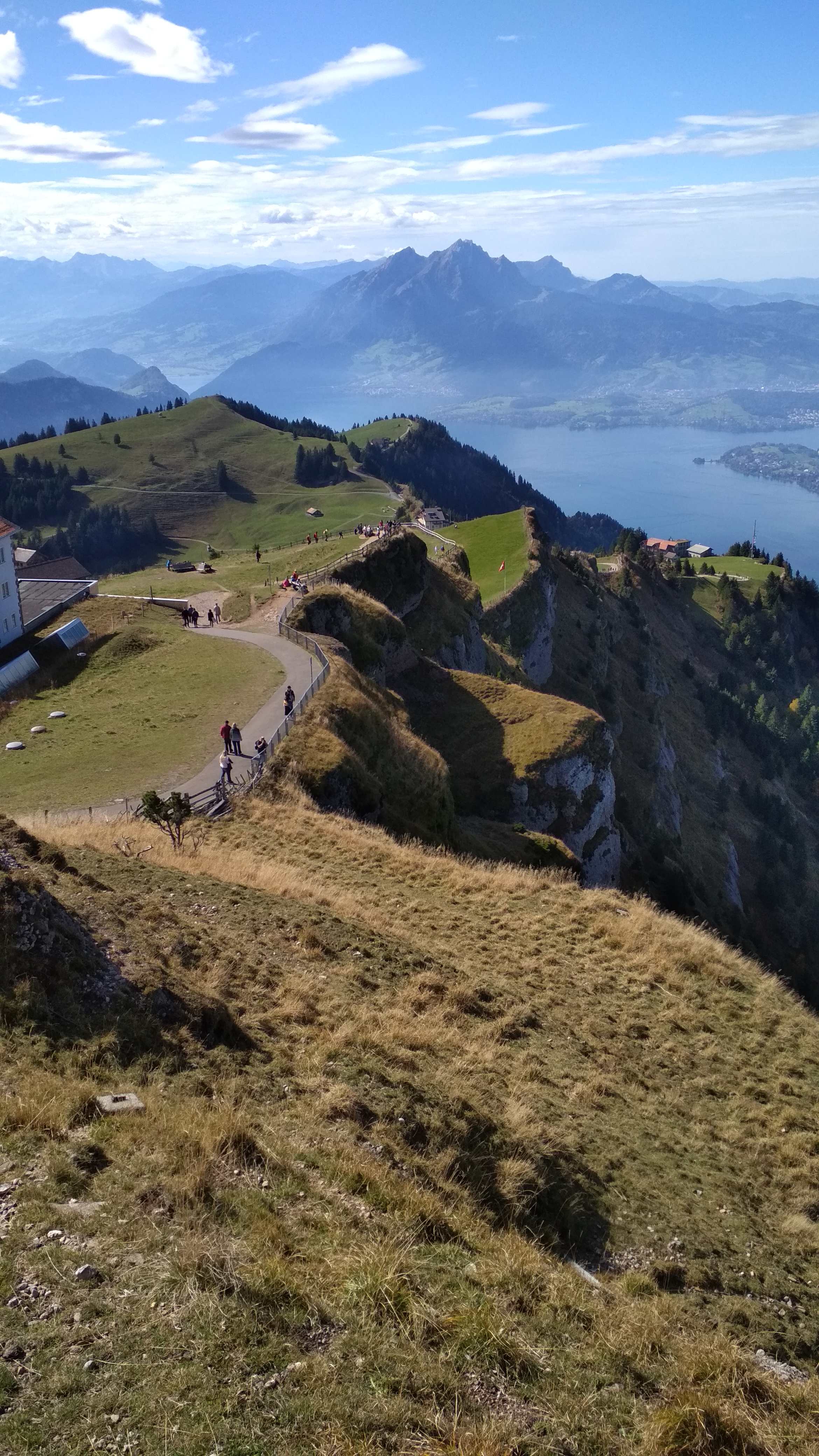 From the top was visible Zurich, Luzern, mountains above Luzern (Esel - Pilatus, available by cable car) and the gorgeous Alps to the south. 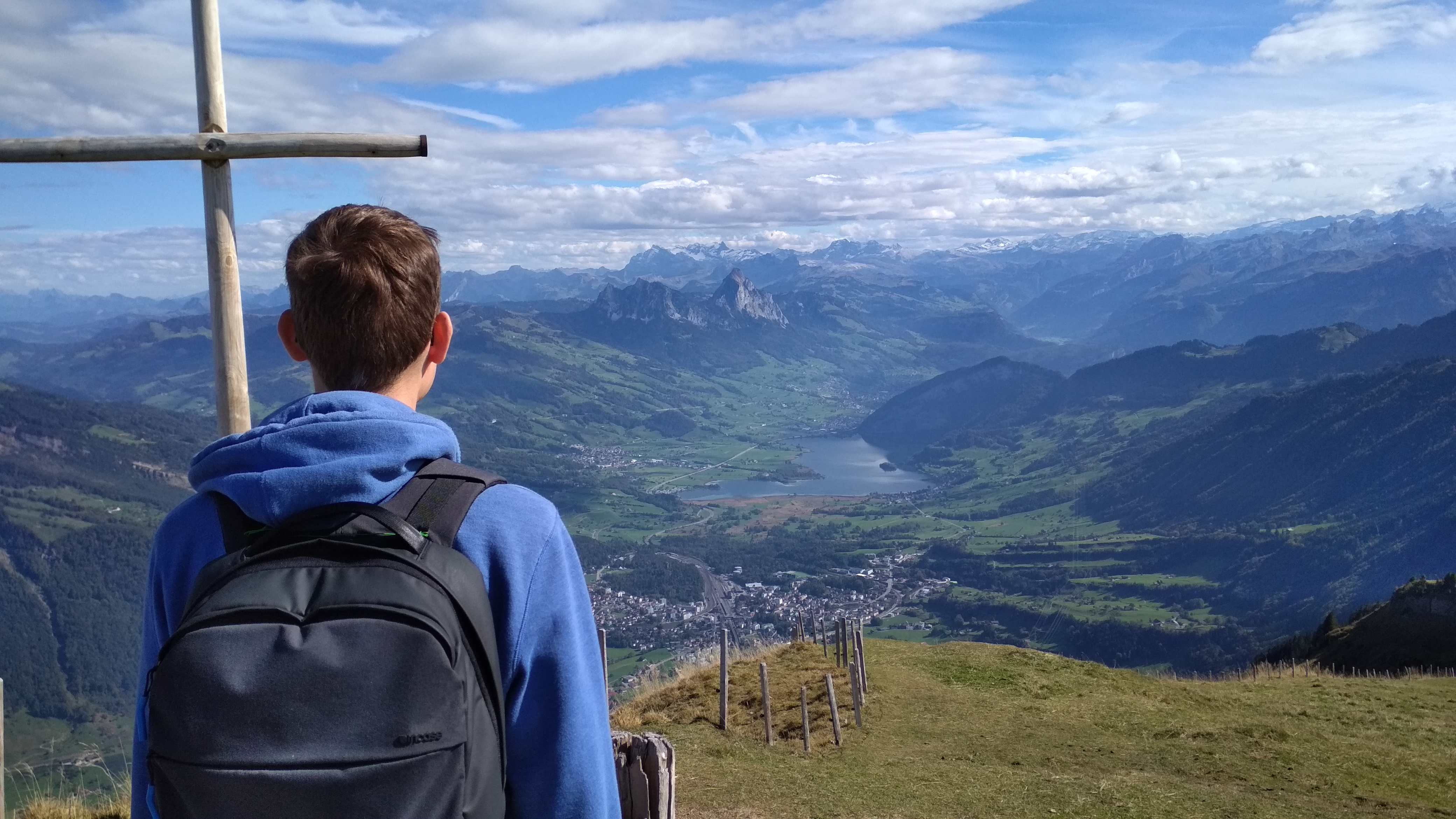 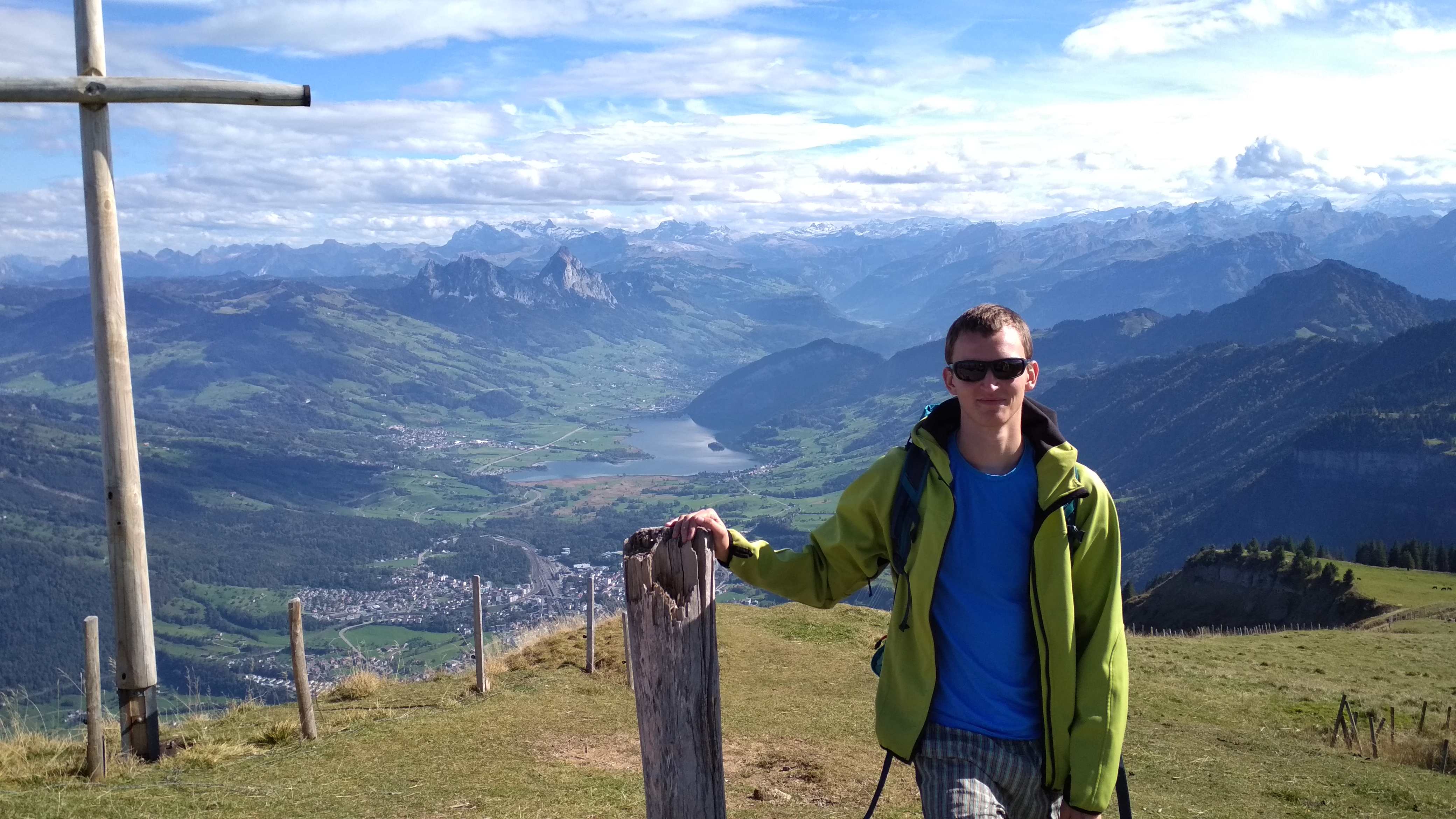 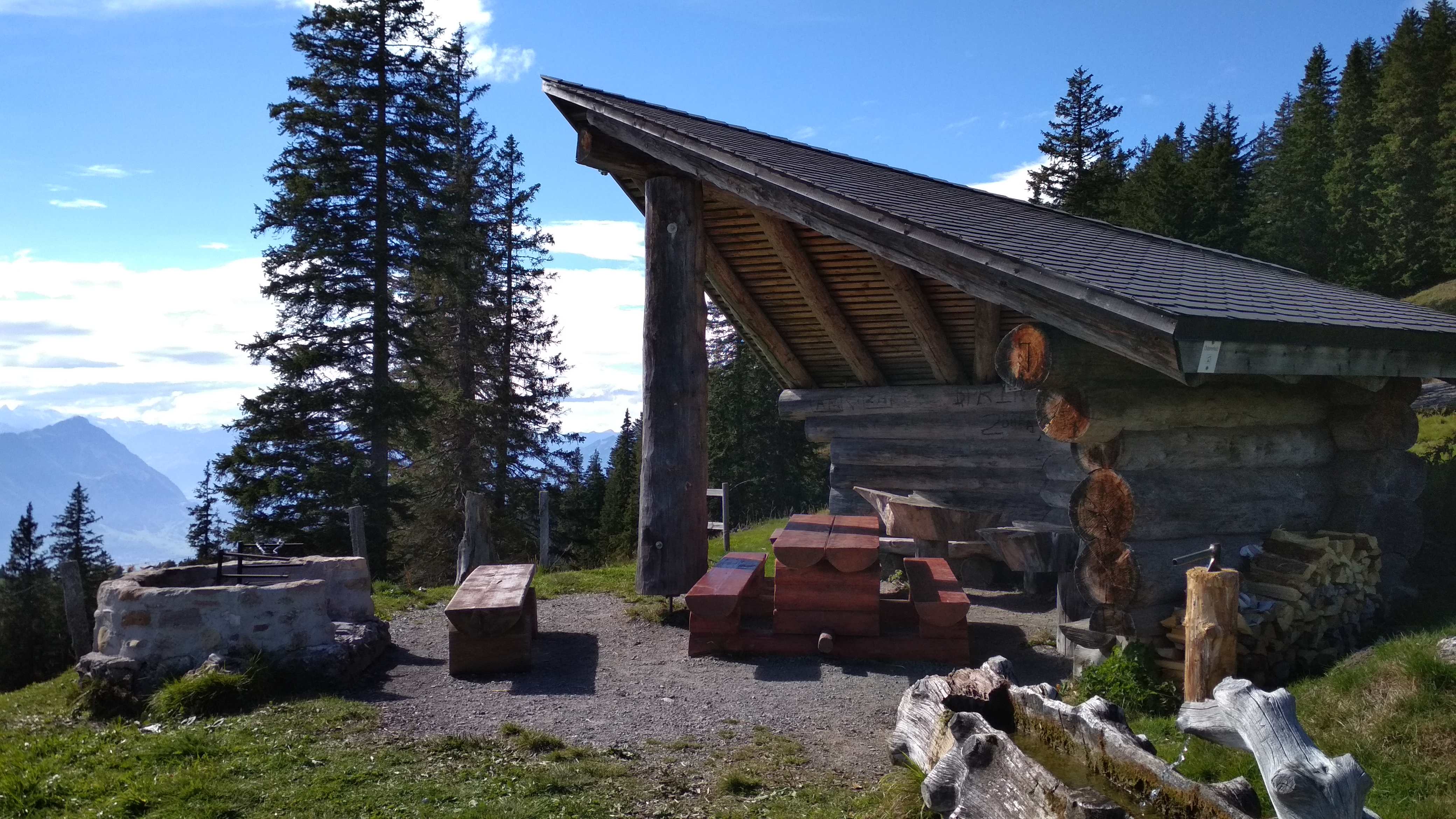 There were two nice shelters with grill and chopped wood, free to use. It might be a nice trip to picknick there in the future. 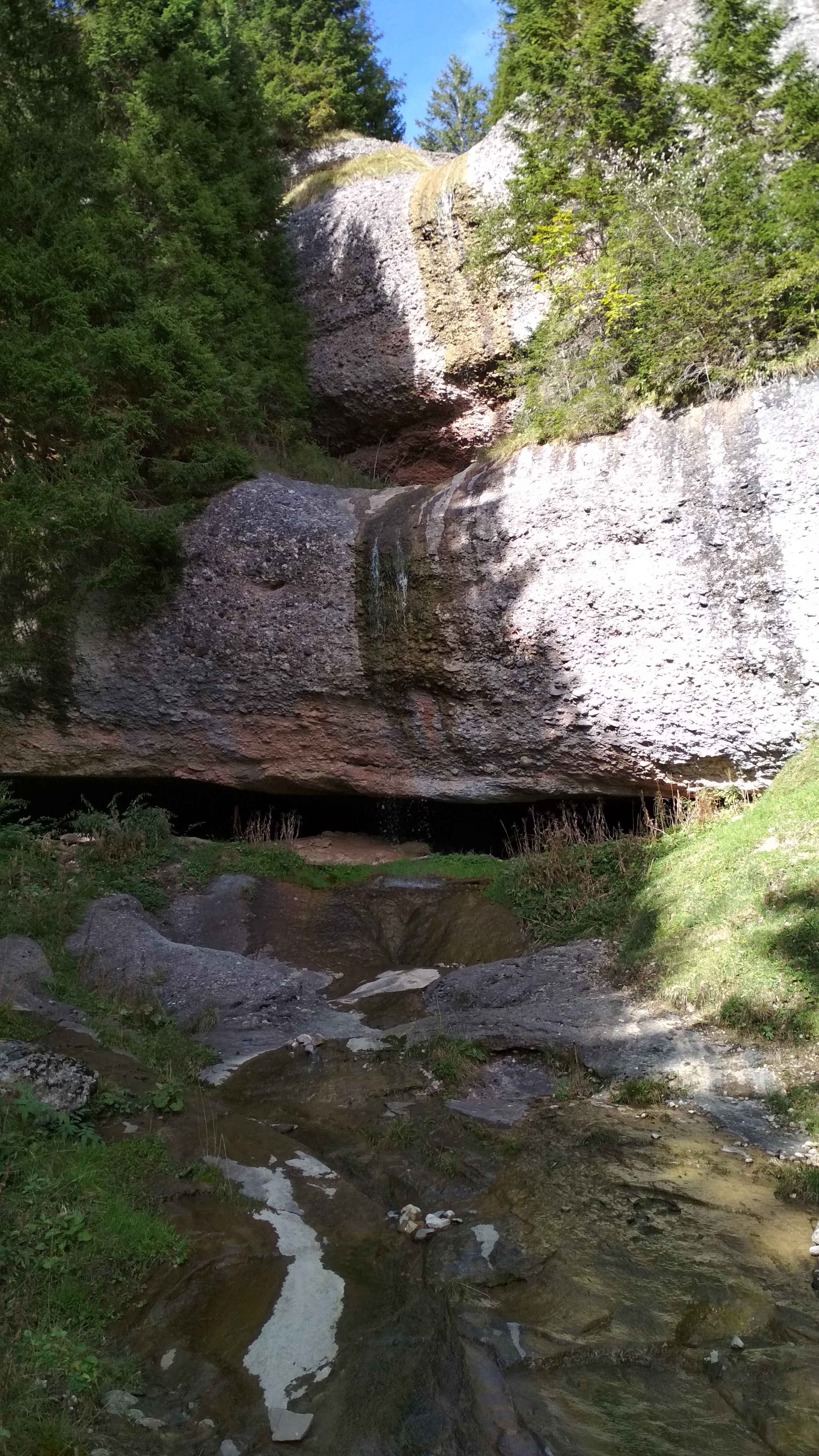 I have got a full-suspension mountain bike before departure to Switzerland. I did not have an opportunity to test it in real mountains, until Sunday, October 7th.

I inspired by this blog post. Unfortunately, I have not motivated anyone to go with me, so I went alone, informing Tom about the schedule, exact track, and dangerous places, so someone knows about me if I get injured. I also had to take quite a lot of stuff, as there was a chance of raining/snowing above 2000 meters. 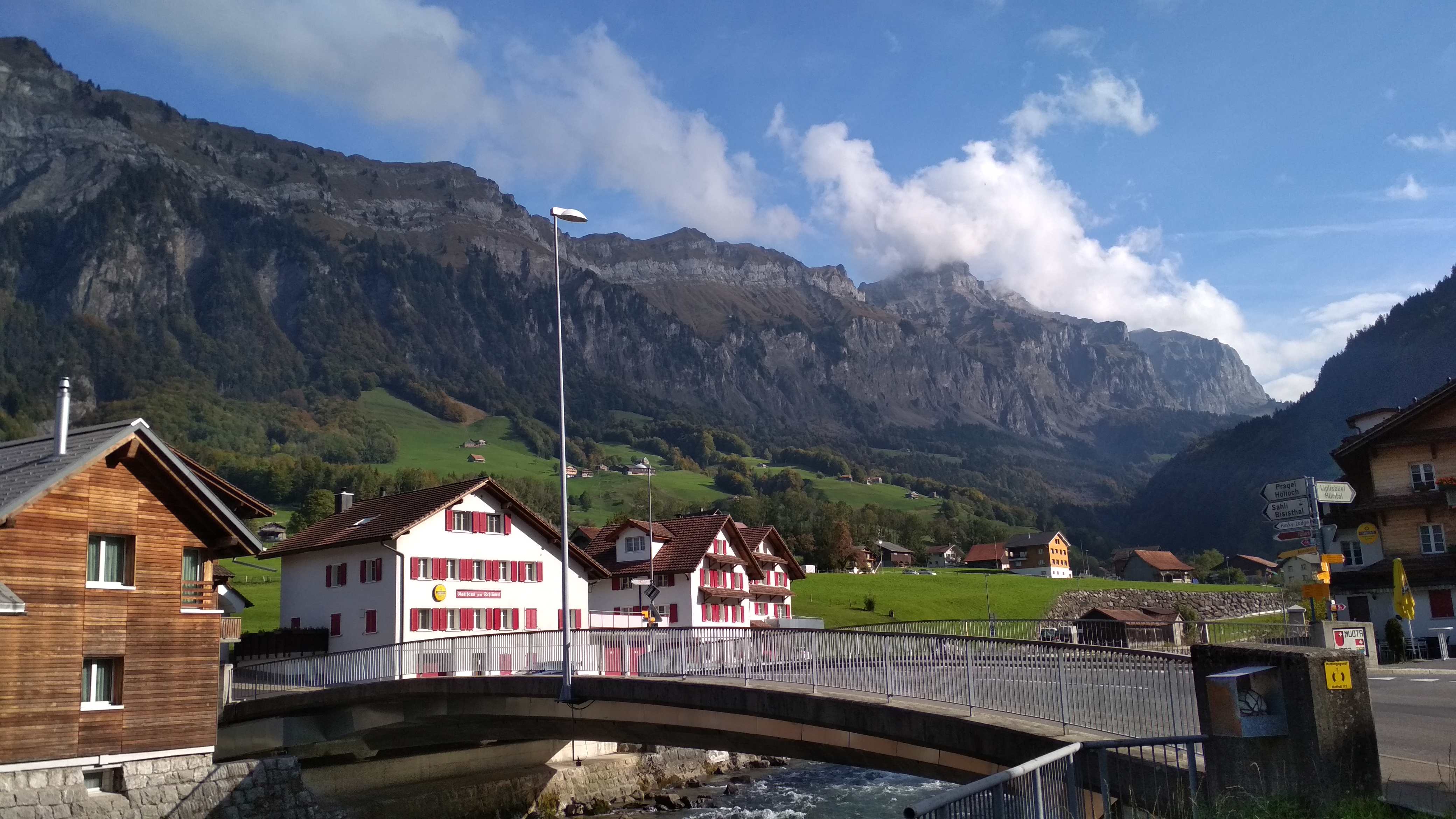 Weather was fine - allowing such pictures without getting sunburned.

I took the same path and approach as the referenced blog post. From Schwyz, I took a bus to Muotathal, from where my ascent began. I knew I have to climb from 630 masl to 2080 masl, and I was scared by the hight of the mountains around (=above) me. But just hour and a half later, these scary mountains by Muotathal were below me, and I focused on even higher peaks in the direction of the pass. 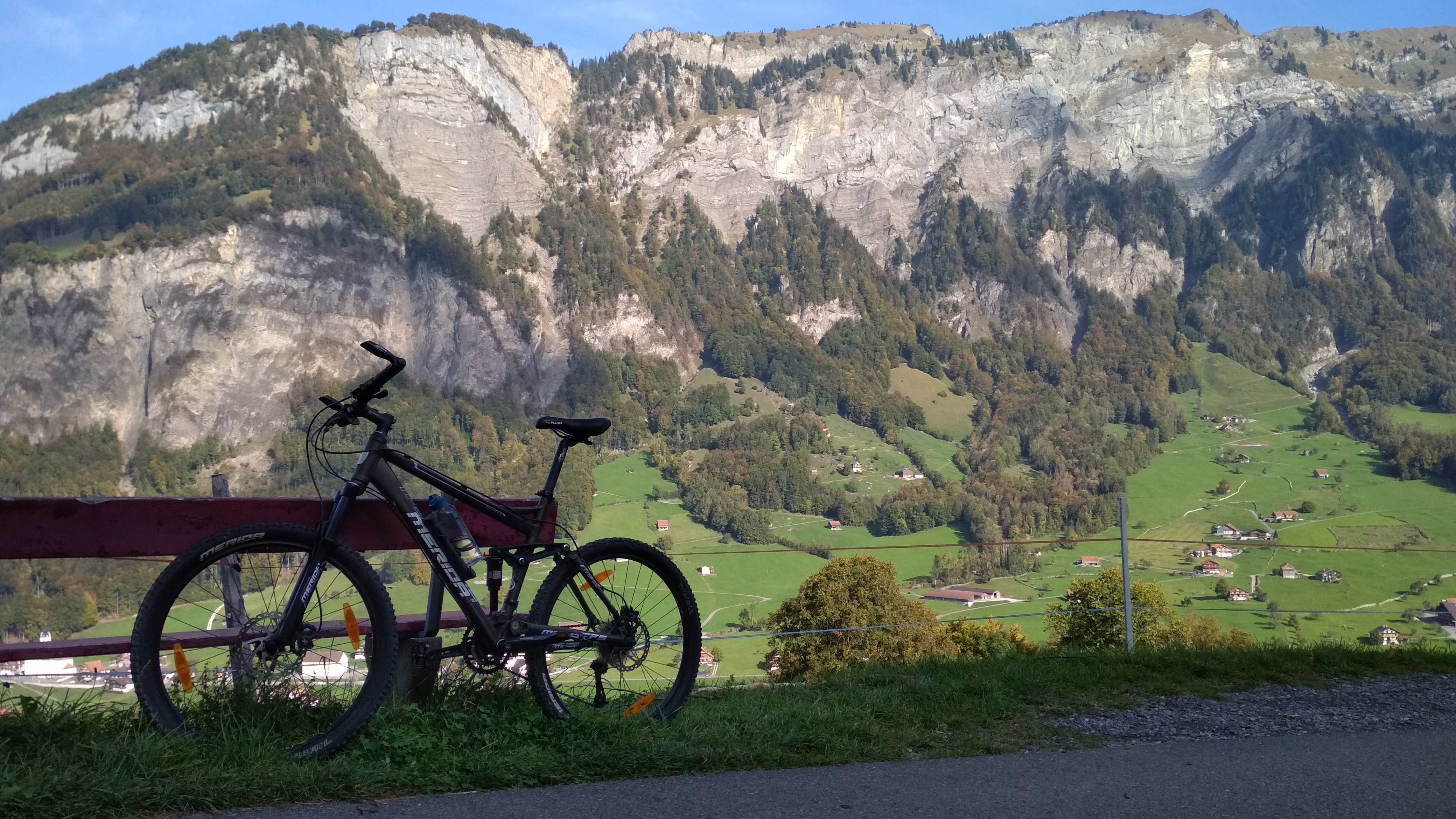 Bike at the beginning of the trip.

I stopped for a snack at a freely accessible cabin that I forget to photograph. But I think I will visit it in winter and sleep there - the surroundings will be great for snow-shoeing or ski-touring. 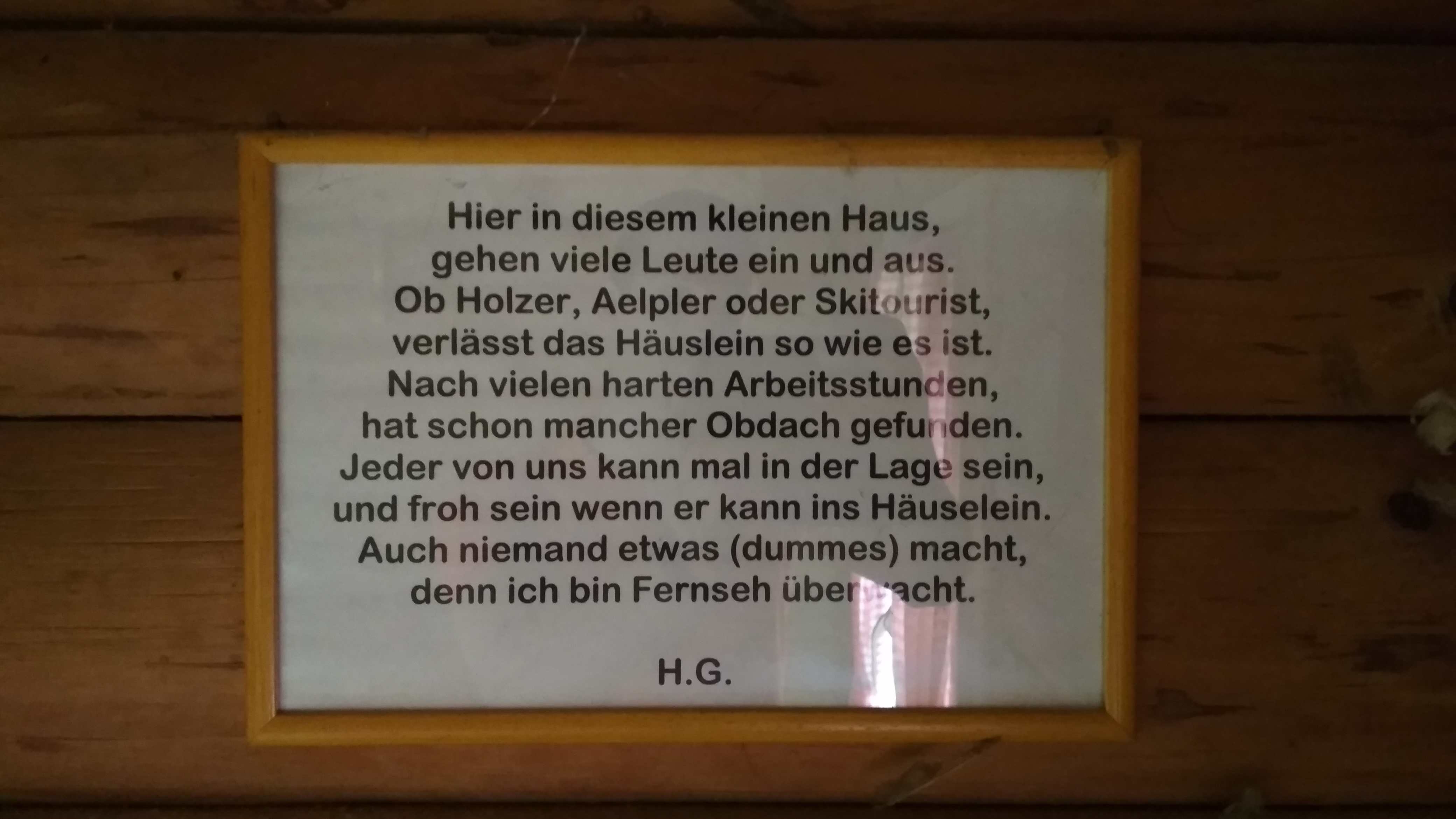 Poem about how to behave in the hut :).

After this cabin, the road changed from asphalt to gravel, and the slope has got steeper. I missed easier gears on the bike. Especially the last 200 elevation meters were worst, and I had to push the bike two times. Snow was only in the shadows and above 2000 m. 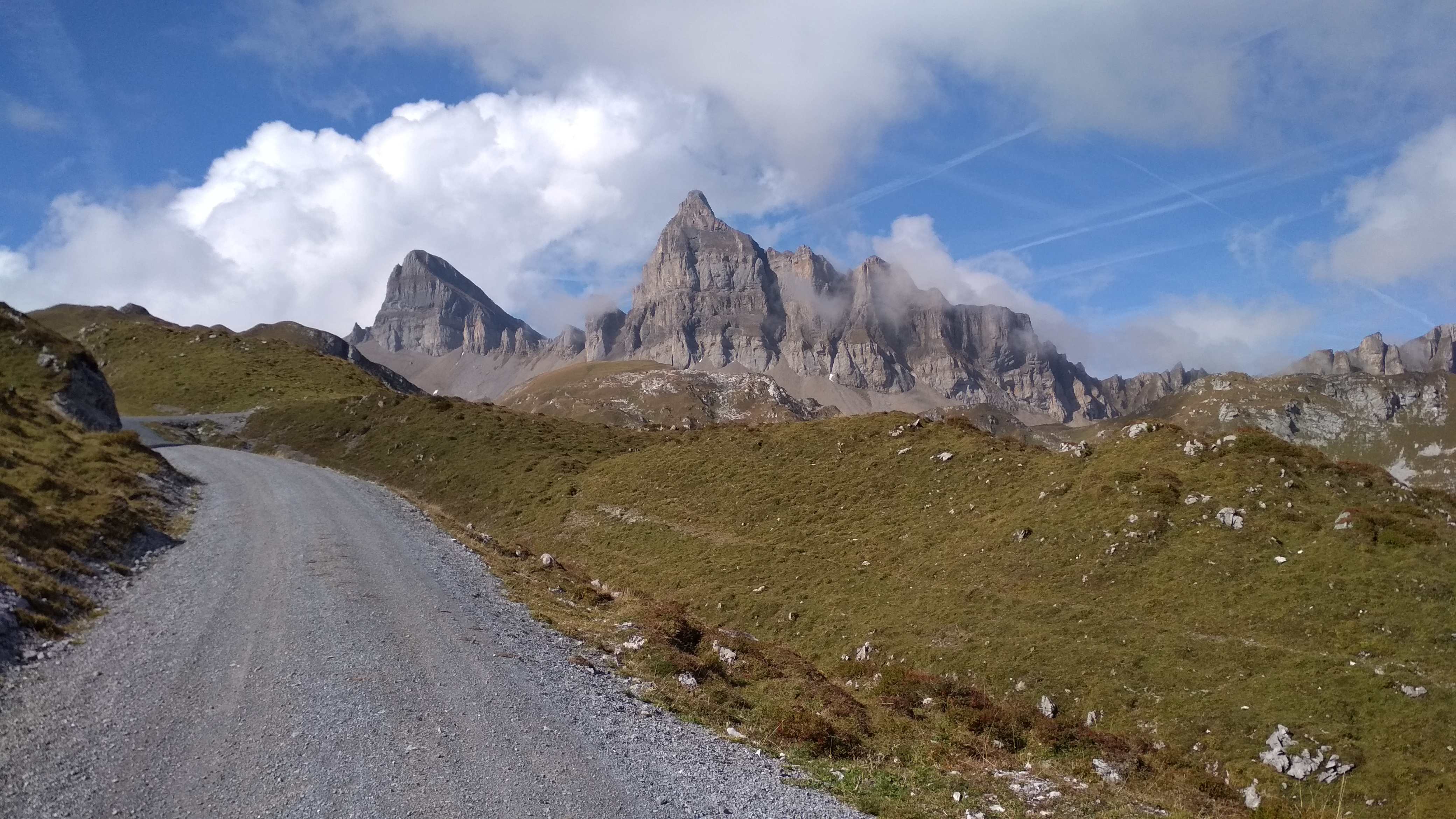 Mountain Fuller. Due to the weather, I took many pictures of it. It was also an excuse to rest a bit. 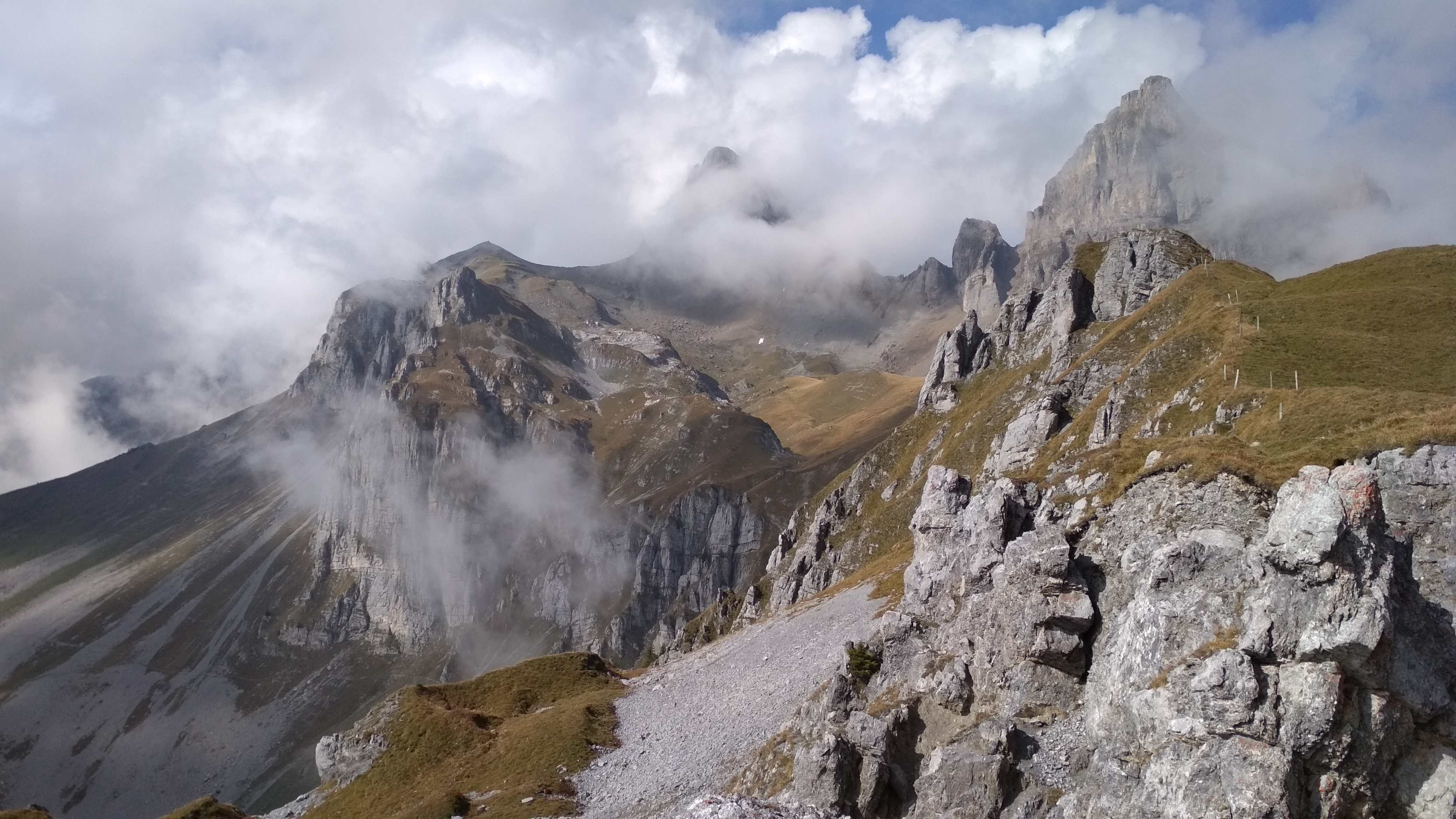 Finally, I got to the top after 3.5 hours of ascent. Closer to exhaustion than ever during last year. Hiking is so much easier. But the views were worthy. 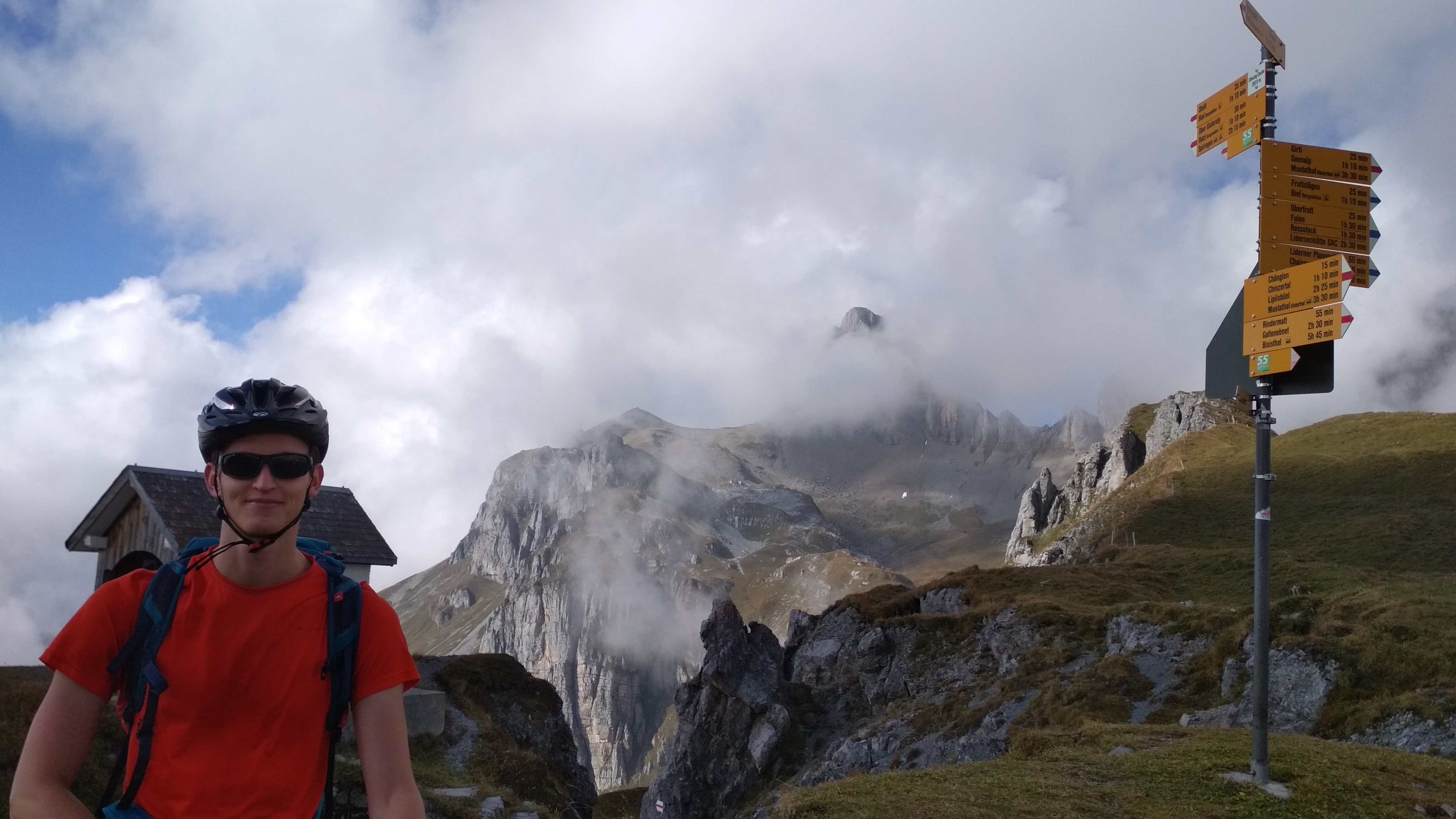 On the top, immediately after reaching it.

I spend more than half an hour on the top, heating myself on the sun and finally eating my lunch at 14:30. There is another cabin, also freely accessible (I was told there are not such cabins in Switzerland), even more beautiful than the last one. 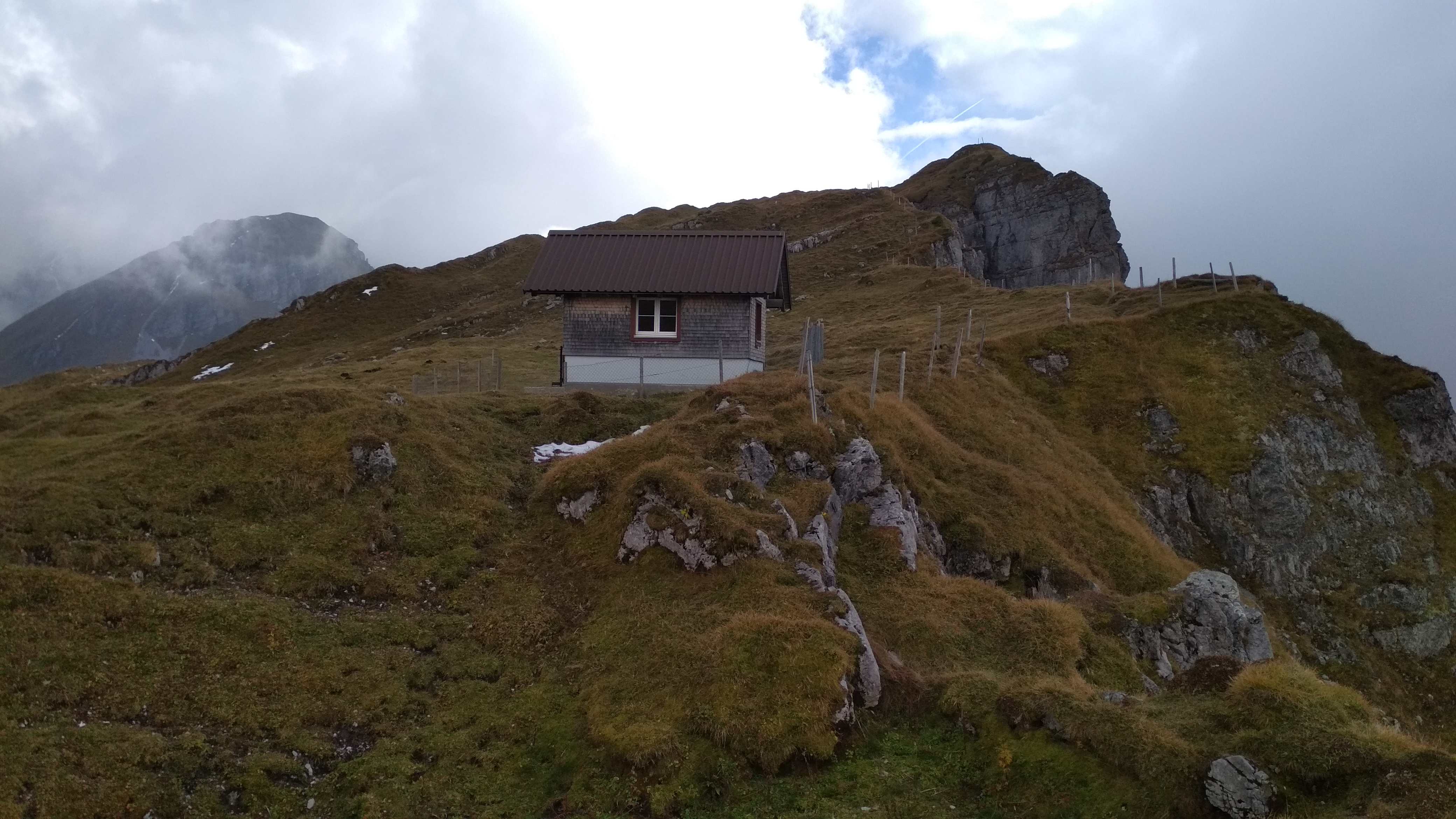 Cabin in Chingiz pass. It was even nicer inside, having 2 beds.

The ascent was challenging my stamina, the descent my riding skills. My approach in many sports “Who is not falling is climbing/ice-skating/skiing… below its limits”. was not the smartest there. The path was steep, the gravel was slicker, and then there was a stone across the road. I managed to jump over it, which increased my speed and I was not able to break before the next curve, letting the bike go. I was fortunate to get only a few scratches on hand and knee. 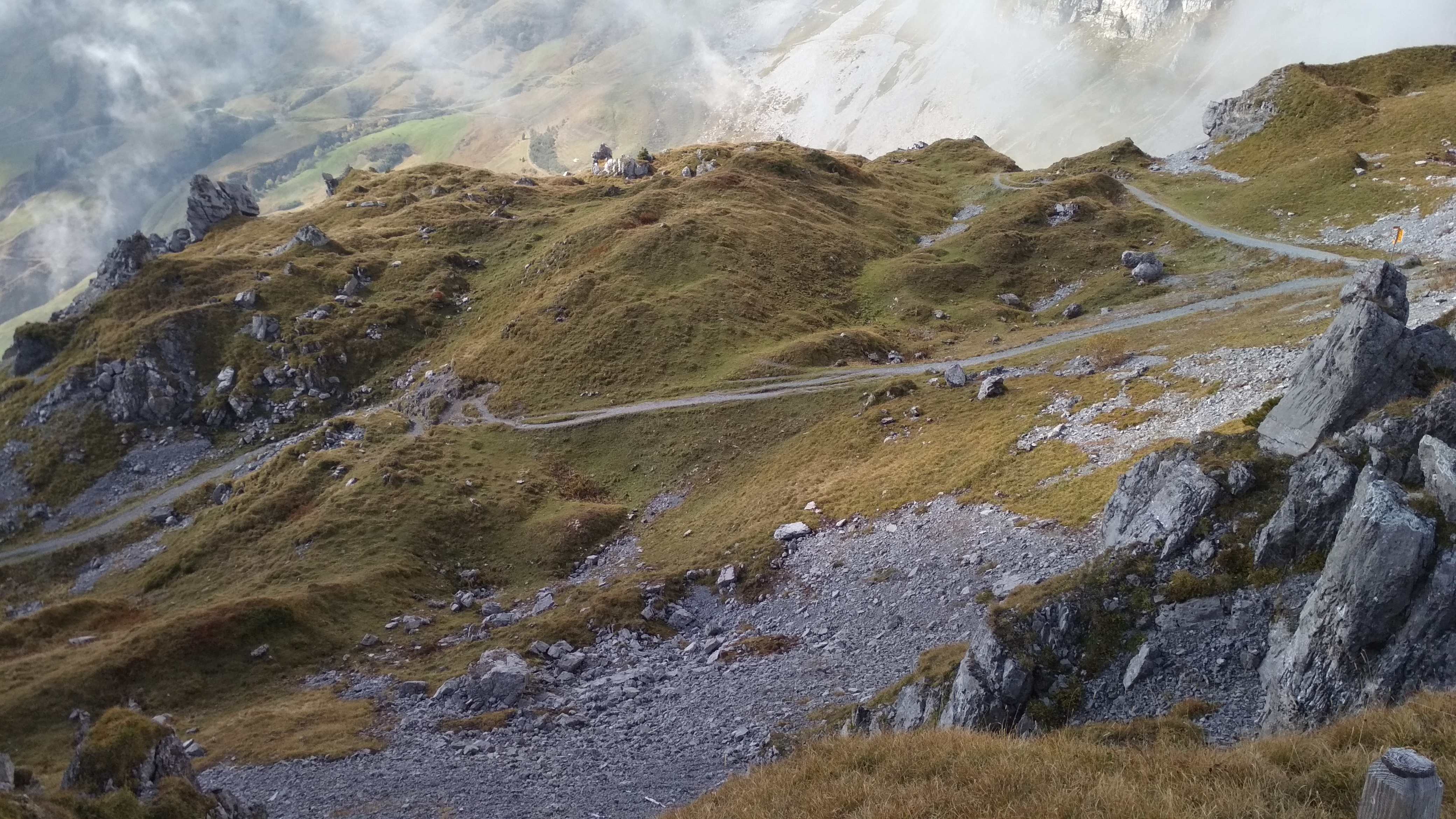 A trail with such a view - a paradise for most of my biking friends.

The road became again bigger after a kilometer, technically not so challenging, but appropriate for me to learn how to use the new bike. Once I met a guy on a hard-tail bike, and I have seen, how much more work he has with the terrain. I was more or less sitting due to being tired. 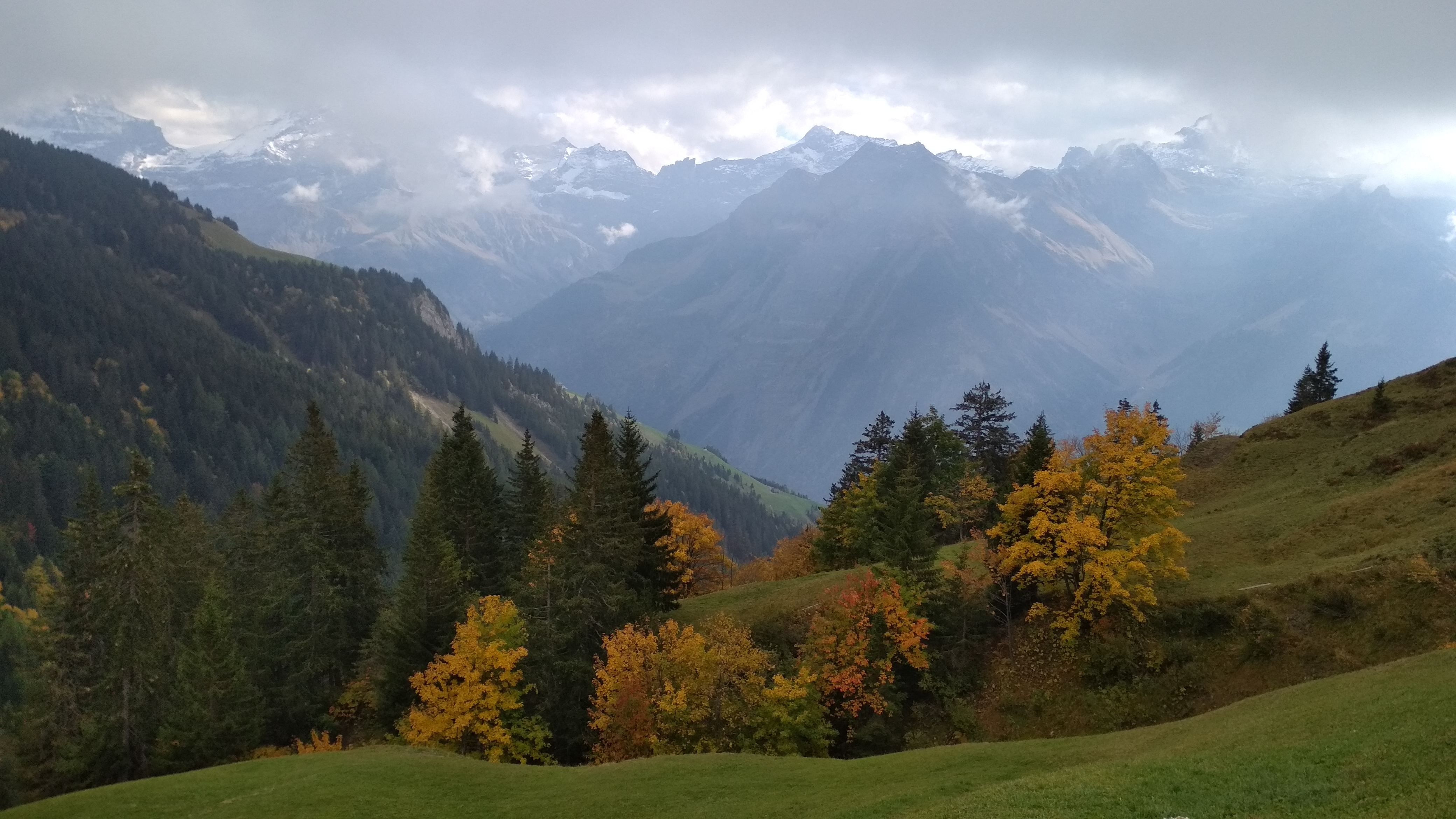 Final descent of 1200 meters was a test for the brakes, burning most of the time. 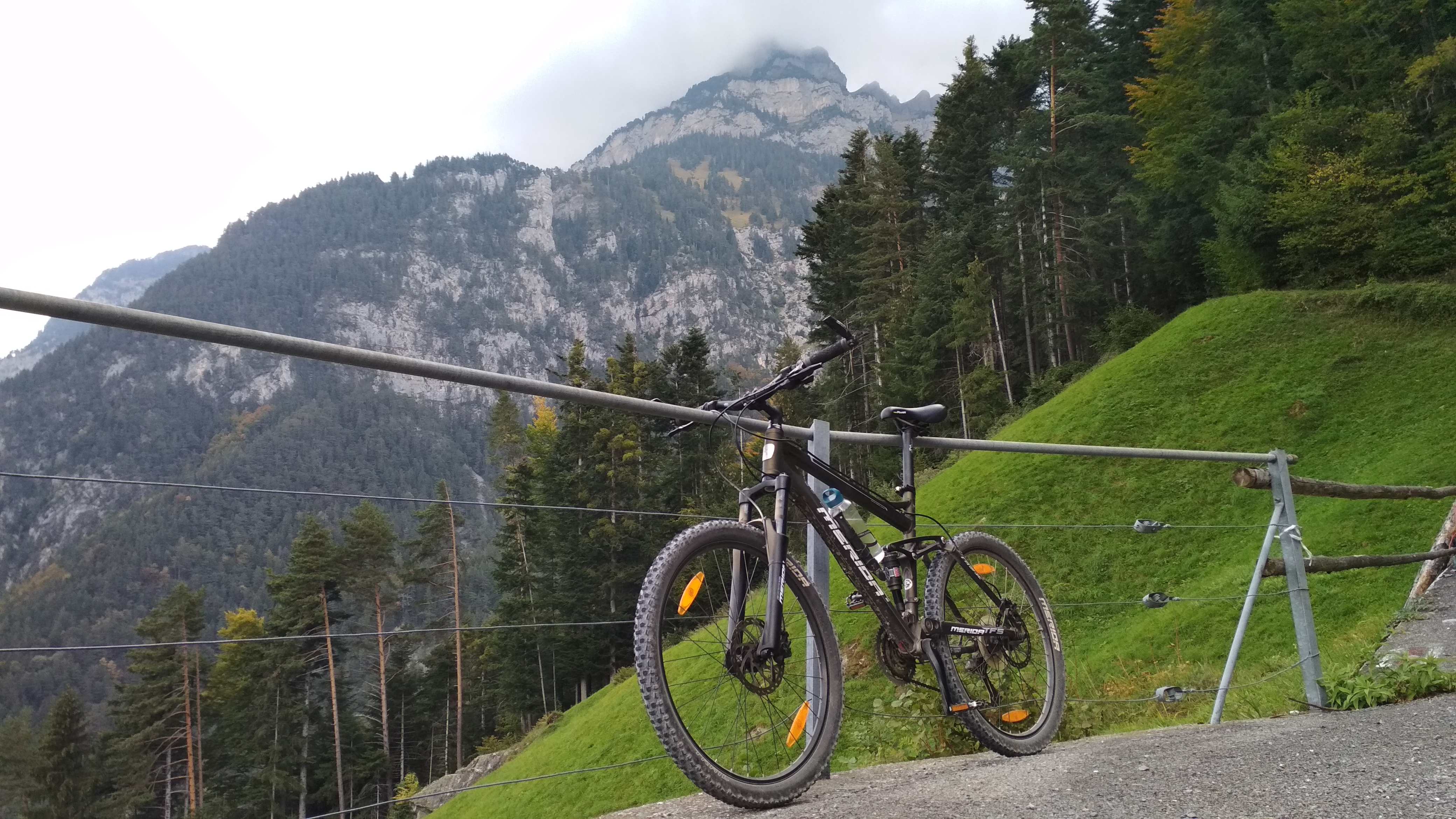 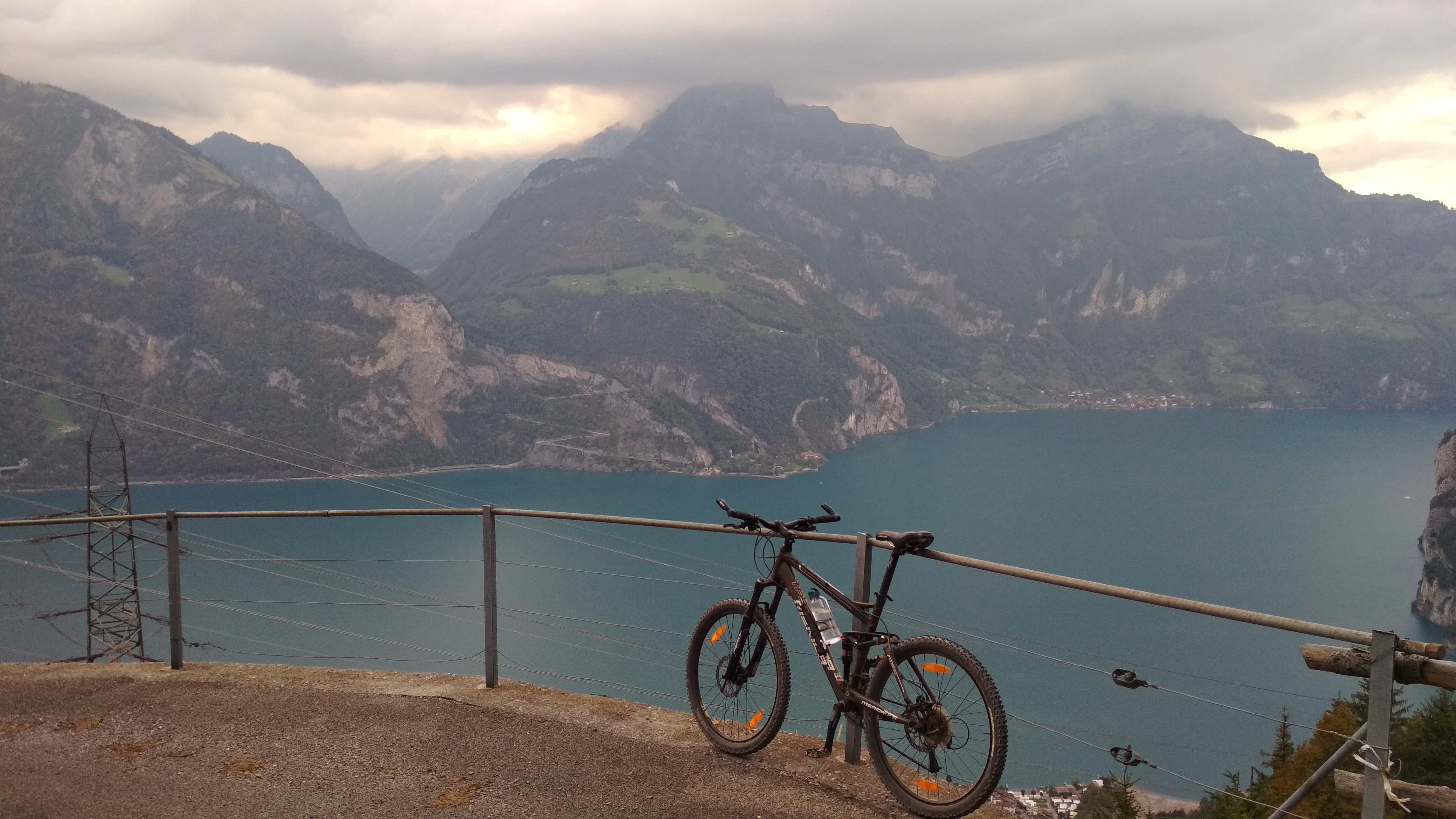 Bike with mountains and Lake Lucerne in the background. Luckily there were such views to stop and cool the brakes a bit.