The first autumn weekend gave us clear weather and hiking opportunity. So I went with tom for two single day hikes to Großen Mythen and Klausen pass.

We hoped to join the trip with other friends. However, I know only a few hikers and getting known several others just one day before leaving was too short notice. I hope this post may enthusiast others for the next time.

Großen Mythen is 1899 meters high mountain above town Schwyz, just 60 km from Zurich. It was suggested to me by office-mate Tobias for its position - it is situated just between four big lakes and even Zurich is visible from it.

When we started our hike, we were surprised by the mountain shape. If I were not informed that there is a touristic highway to the top, I would be afraid of how we will make it.

This seemed steeper than Skuta (Slovenia), where I have got known my limits during last summer.

The path was maintained well and allowed frequent passing with crowds of tourists. We made the 1000 meters elevation surprisingly in less than estimated 2,5 hours. 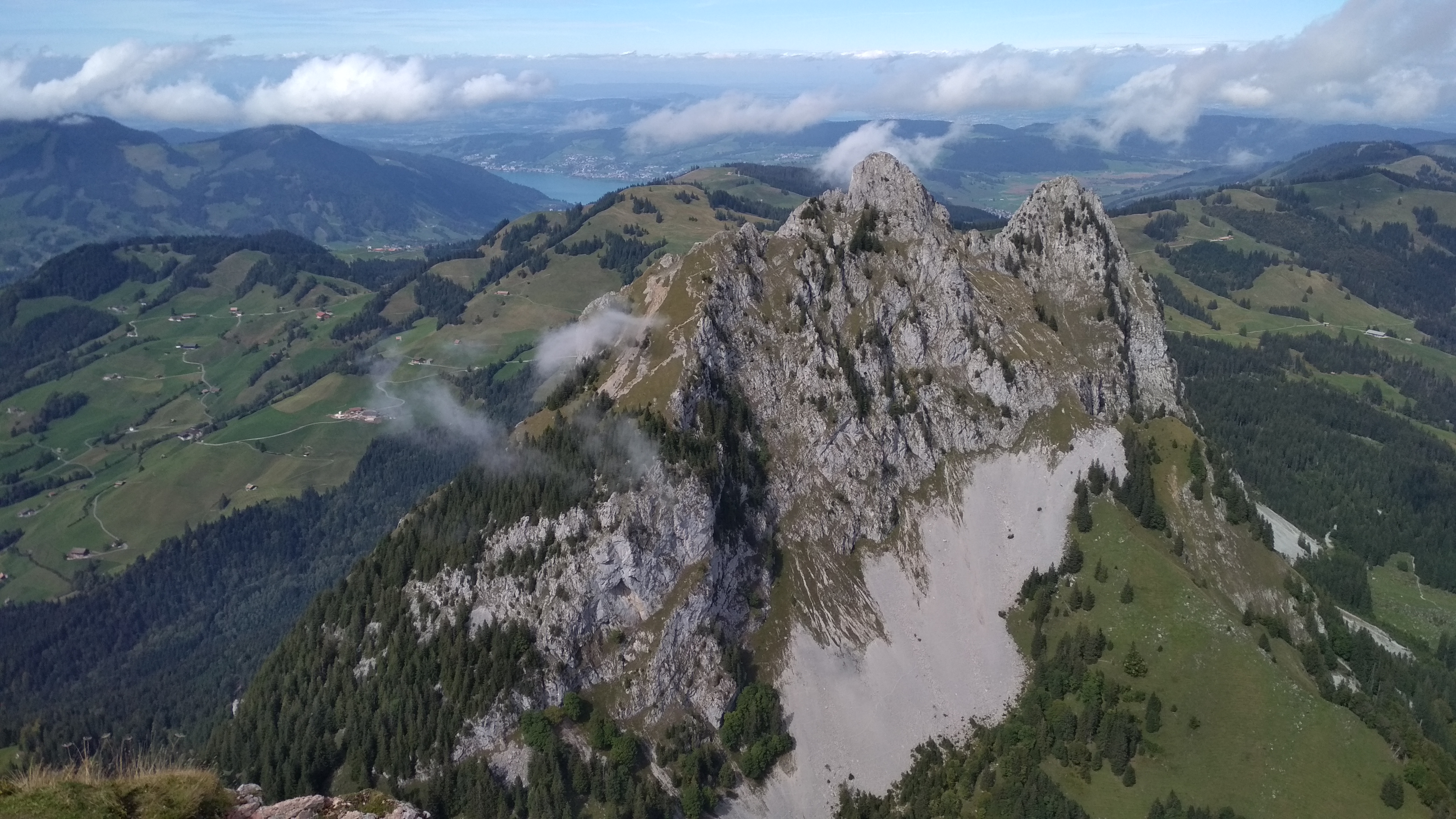 Kleine Mythen next to us - the scramble there may be a next trip :).

There is a cabin on the top and a beautiful view. We had a view to the north; however, highest Alps to the south were hidden by the local cloud, that disappeared when we walked down. 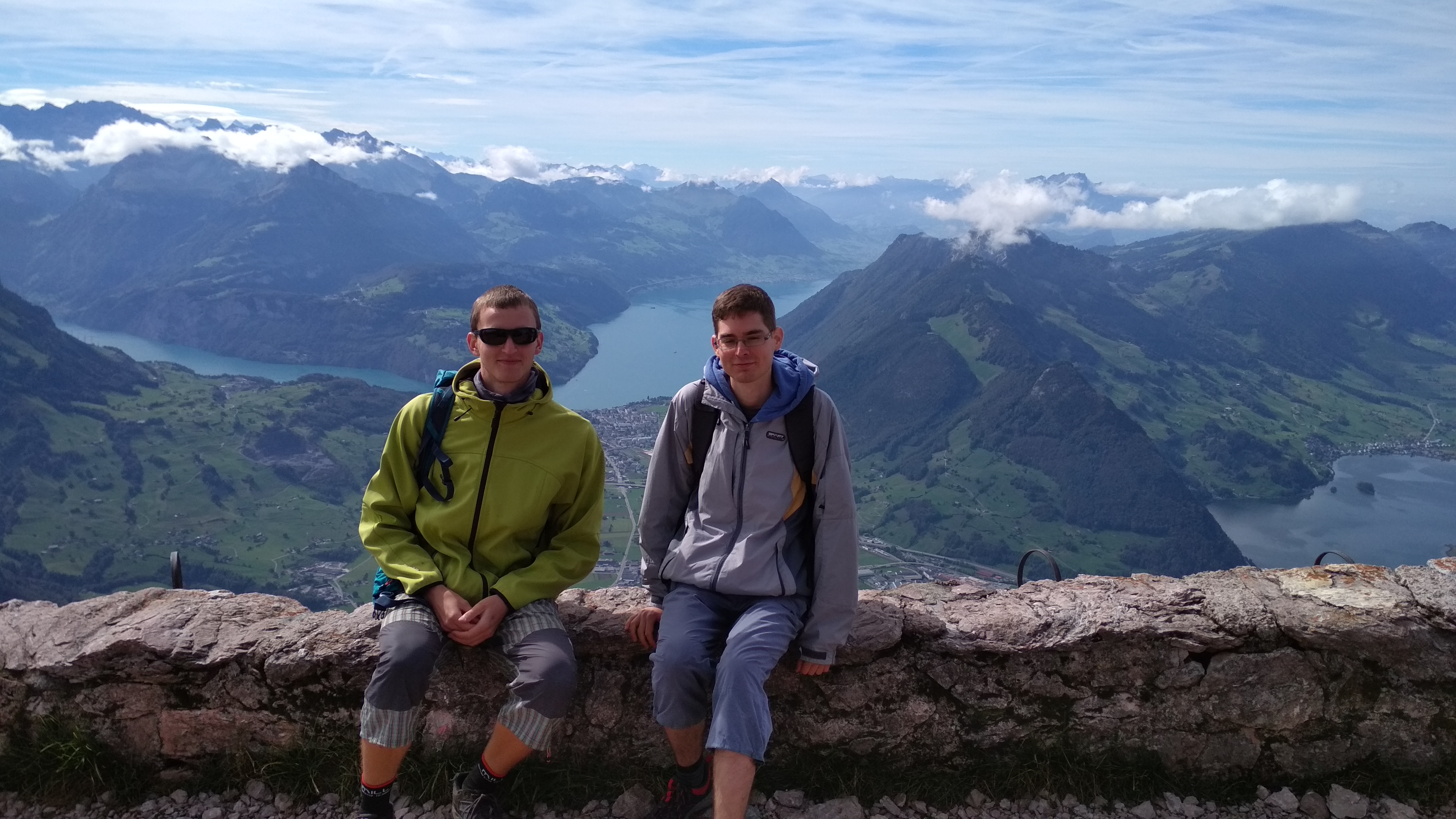 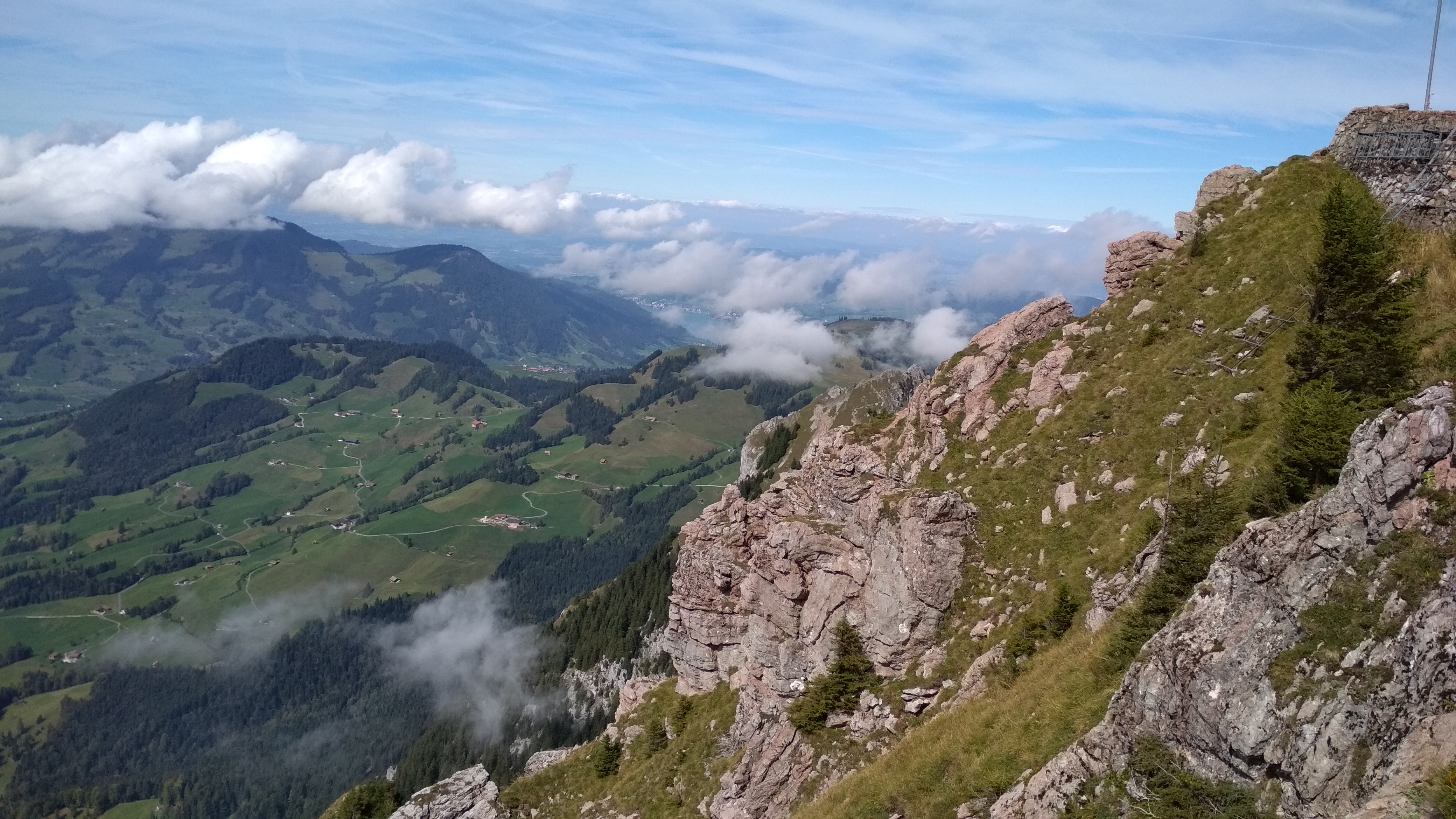 Zurich was sometimes visible in this direction, but not long enough for me to take its picture.

The Großen Mythen was visible almost everywhere, where we drove that day.

We decided to sleep by a smaller lake, where supposed to be a camping area. It was closed but accessible, so we ensured if it will be legal to sleep there by asking the neighbors of the camp. They allowed it, but besides they cared if we won’t need anything, which was surprising and kind. We were gifted their grown apples, water and they left us to store thrash by them. They also worried if we won’t get cold (no problem, until I realized I forgot to take the tent for the trip, but sleeping under a small roof was fine, just sorry Tom O:)). I love such politeness in Switzerland similar to the Nordic one.

We breakfasted with this view on the lake. The Großen Mythen is visible.

The hike for glacier lake in Klausen pass was my idea. I cannot refuse the challenge of swimming in cold lakes. The only expected issue of this hike was the noise of drivers enjoying the nice serpentines. The landscape was gorgeous, and the hike was simple.

In the altitude of 2150 masl, there is a lake from melting glacier. It is much bigger than it seems from the pictures and on the map. I could not resist going in, and to my surprise, it was not that cold, but it went deep steeply - after one stem, I was for my neck in the water. 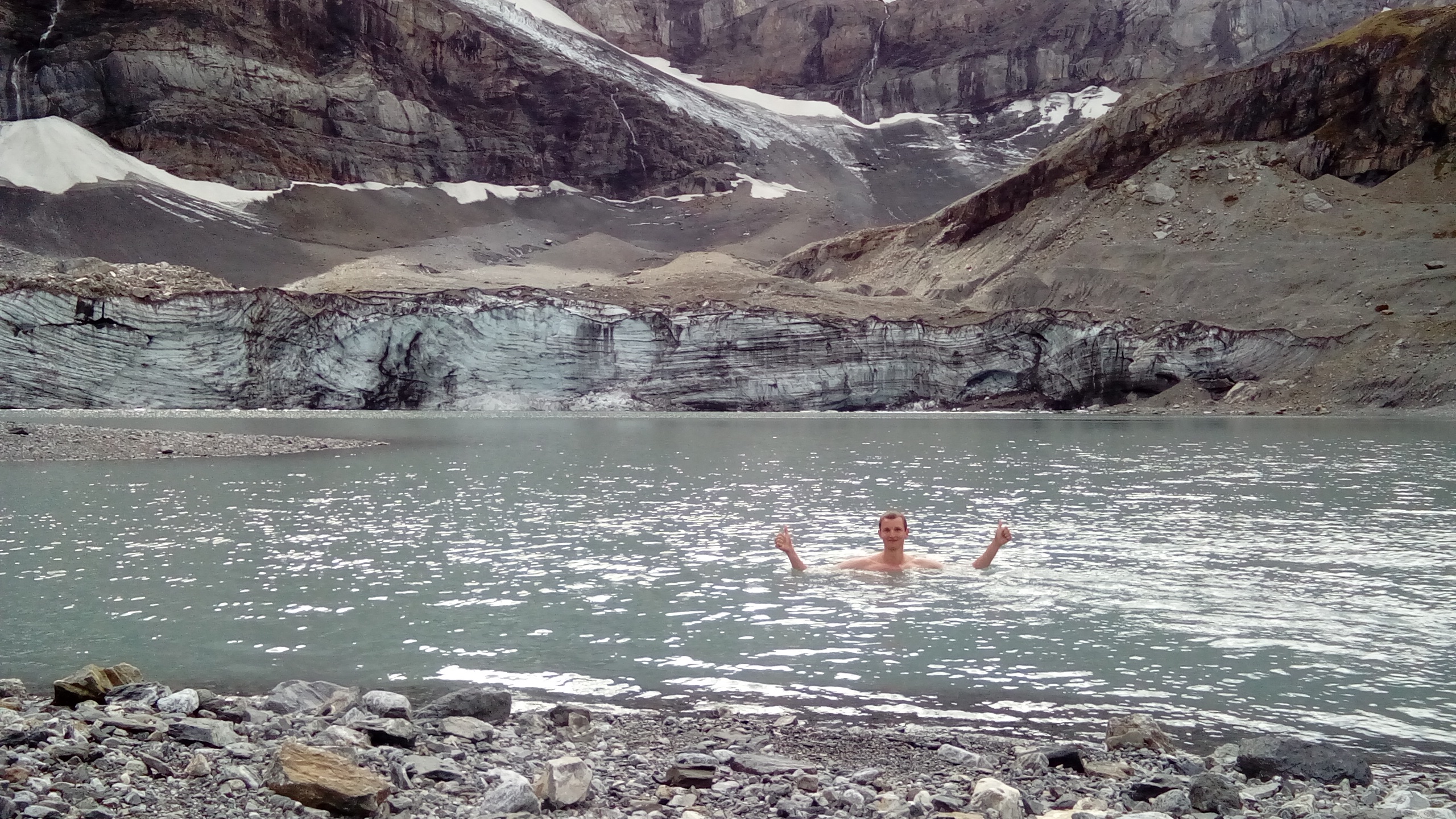 I was not inside for long.

After the bath, we walked around part of the lake and seen a glacier cave and the border of the ice and water. It was surprising how active it is, as there were always falling stones or cracking sounds. The extent of the glacier under the sand surprised me as well. 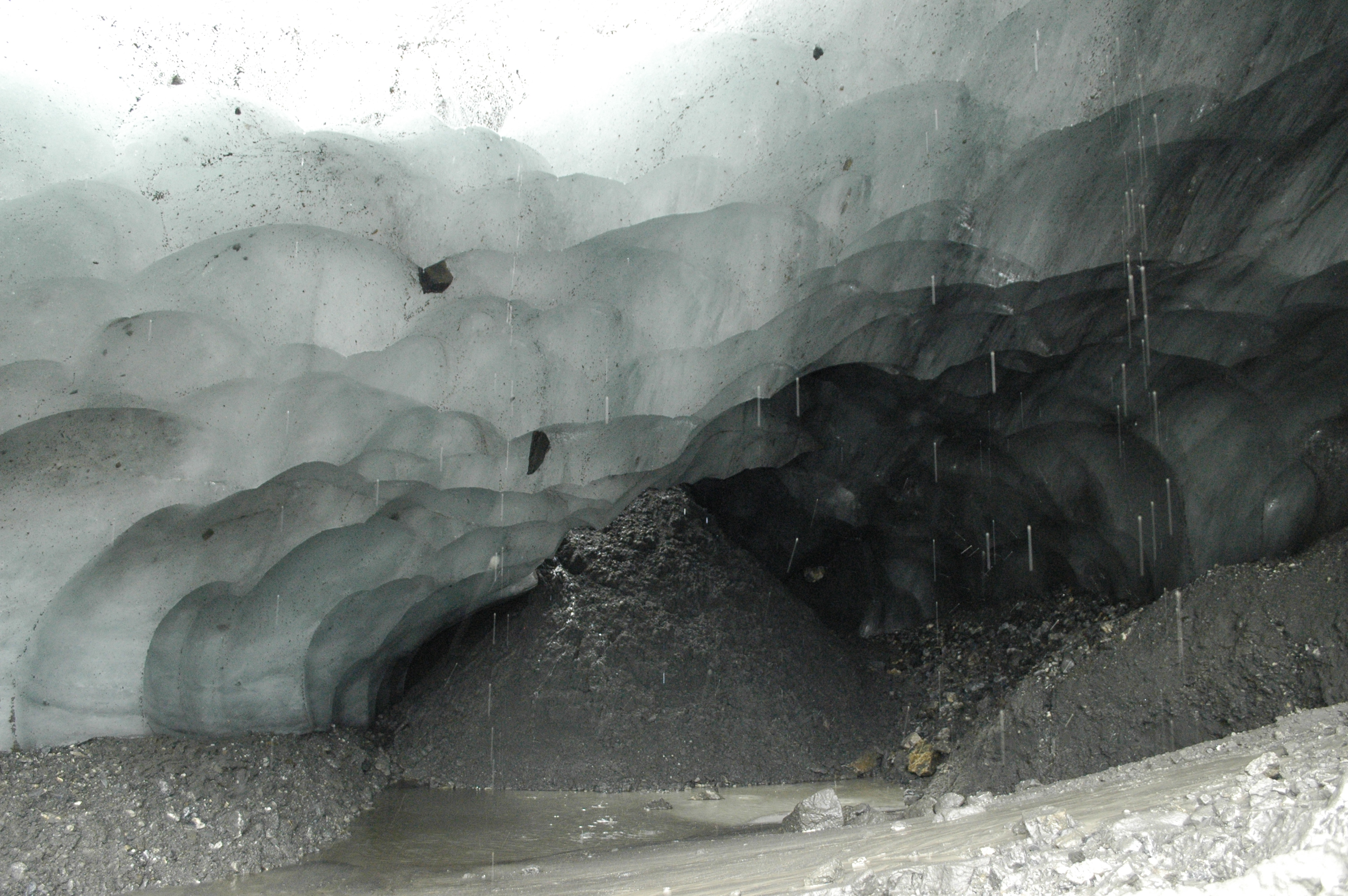 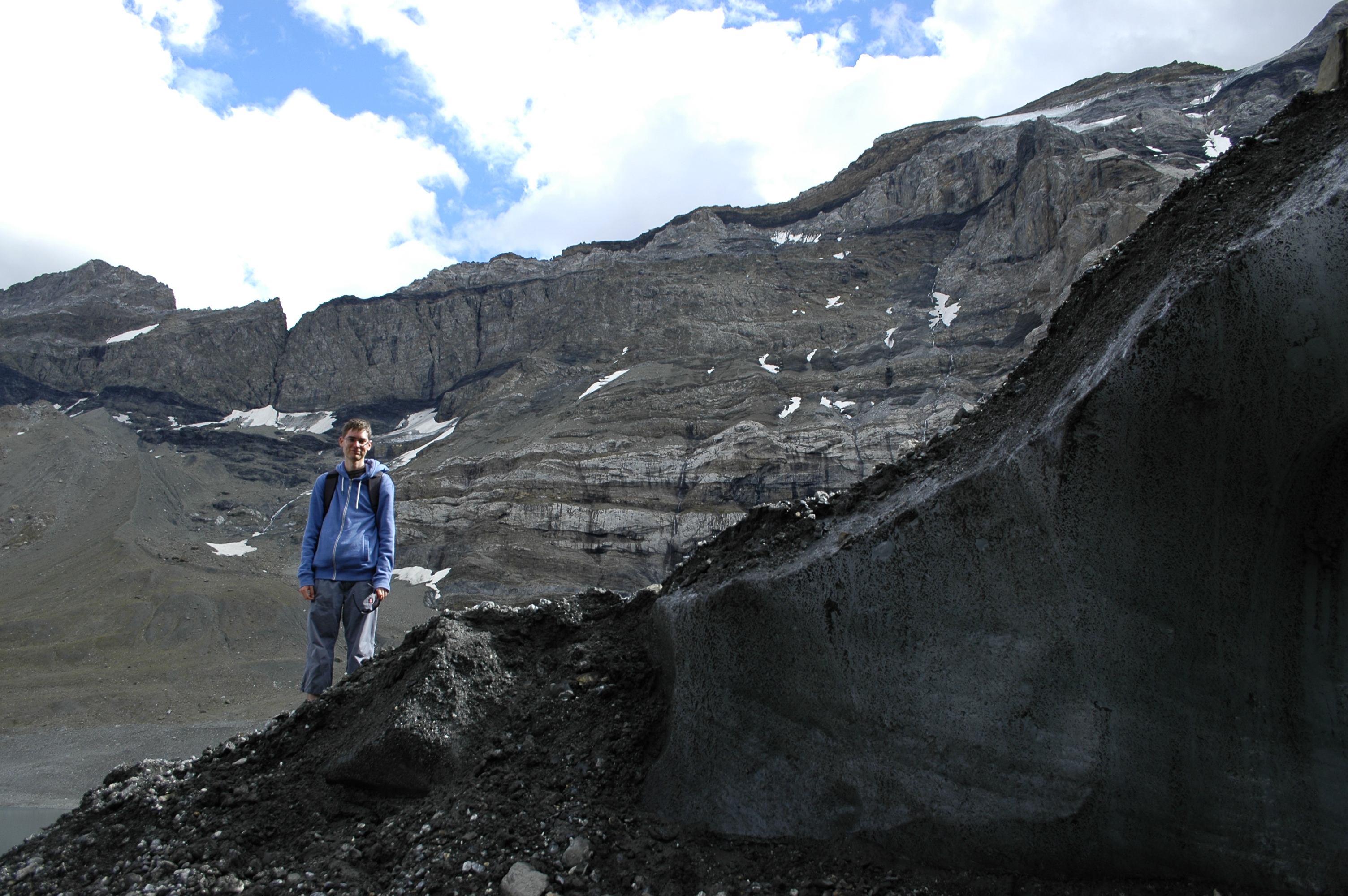 On the way back, we stacked for almost an hour in a traffic jam. Everyone is arriving in Zurich on Sunday’s evening; I should expect that next time.