My second winter in Switzerland. While I planned to do many snowshoeing and ski touring trips already the first one, I hit the wall of not having proper training. Over the year, I got more confidence and nice skis, so mountains, here I am!

But the mountains decided that there will be almost no winter. And I also thought I have plenty of free time to do paragliding. So I ended up with quite rare opportunities to use my nice skis.

Easy tour after a tiring day

On Saturday, February 8, I went flying with Tobi, Andrey, and Valentina for the whole day (post will come later). For Sunday, they forecasted a strong föhn, so we wanted to do an easy ski tour. Pizol, where I was with friends in July, is such an easy tour. A gondola takes you to 2200 masl, with Pizol at 2844 masl, it is only about 900 meters of elevation gain. The guide said 4 hours trip and the public transport takes less than 2 hours door-to-skis, perfect, we do not have to start early. 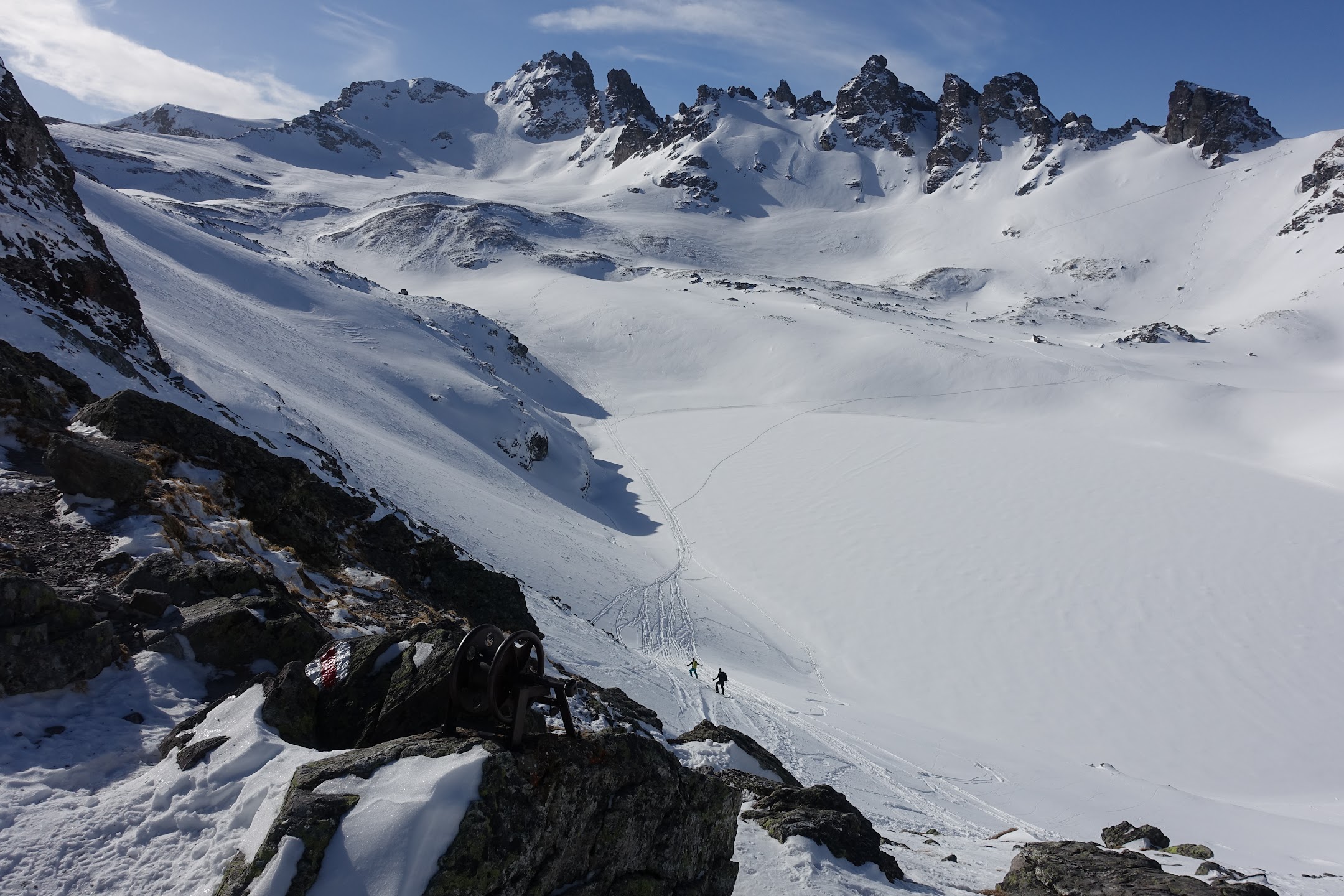 Summer and Winter. Pizol is the left-most peak above the glacier. The Pizolgltescher was officially buried this summer :(.

Pizol ski tour is quite demanding for safe avalanche conditions. Fortunately, there as little to no risk that weekend, handy :). The only limitation was föhn, which was getting very strong over the day, and we were concerned to not be blown off the mountain. So let’s start early anyway :(. 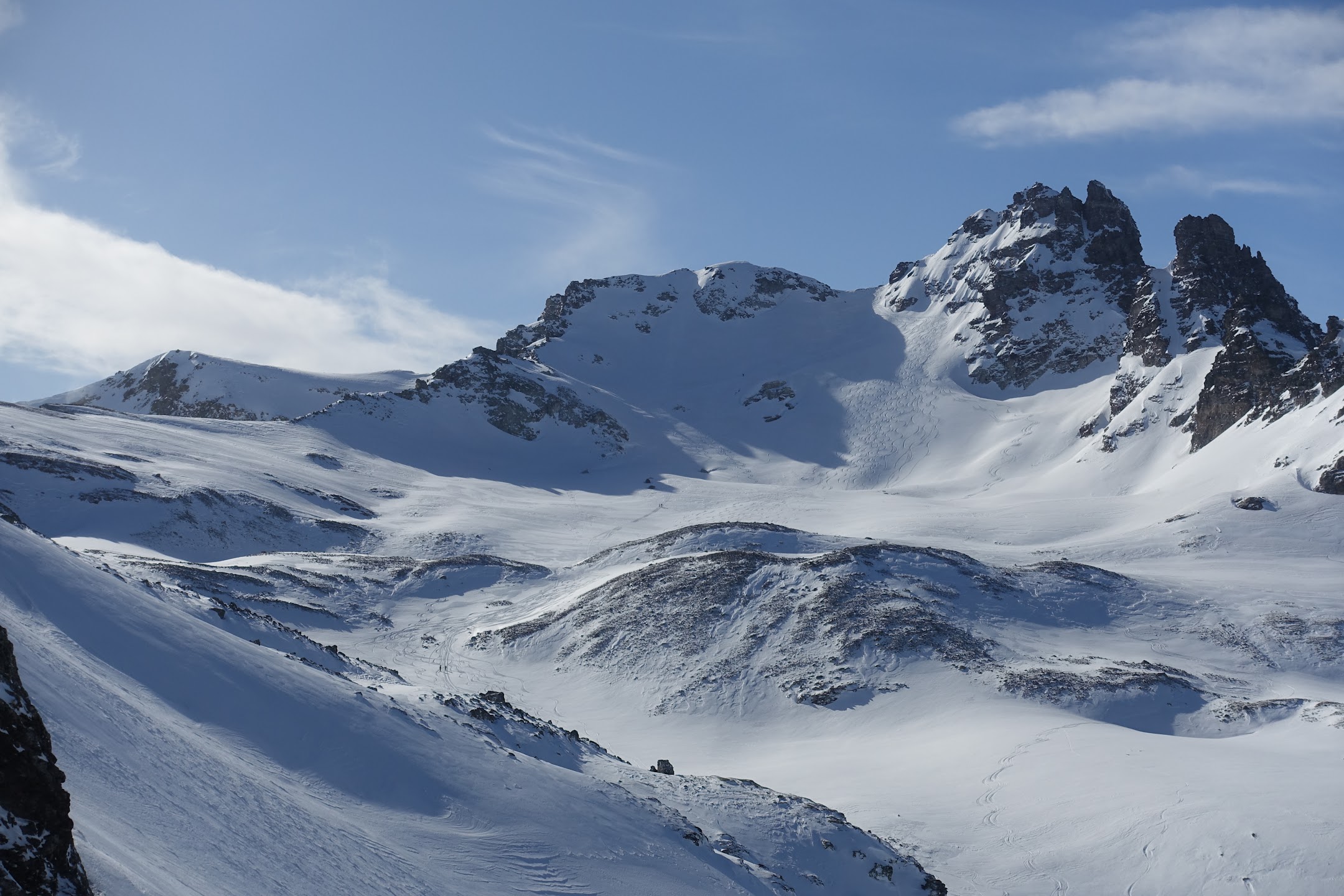 Ski tracks of skilled skiers look so nice. Can I do such nice curves?

Starting early did not help at all. Our train was broken and had almost an hour delay, then the power for the gondola had an outage. The outage caused a huge queue. Like something was telling us that this trip is not a good idea. We anyway started, putting our skis on at 10:30 instead of 9:00.

Strong wind and warm weather (föhn is warm wind) made the south slopes completely icy. However, the north slopes surprised us. They were full of powder, but not too soft for my tiny skis. 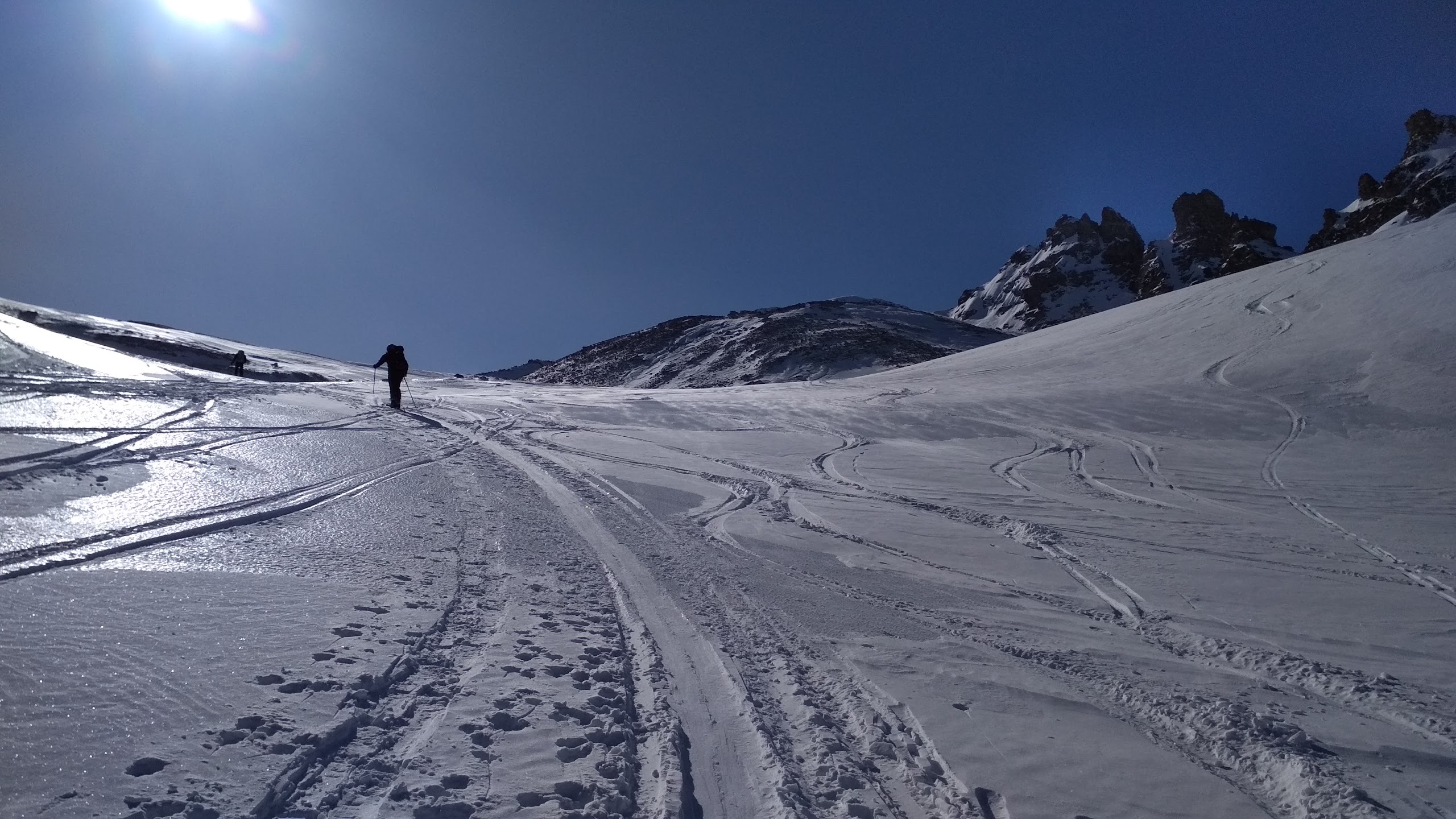 The wind is blowing snow over the surface and forms some icy maps.

Please warn me next time when I would like to try a more challenging ski tour!

After passing Wildsee, the steepest part was ahead of us. >30° slope on top of Pizolgletscher. Another surprise, the ascent run like a moment. I simply did not look down, although I knew I have to ski down. From the col, we got views to the other side and finally realized, how strong is the föhn. 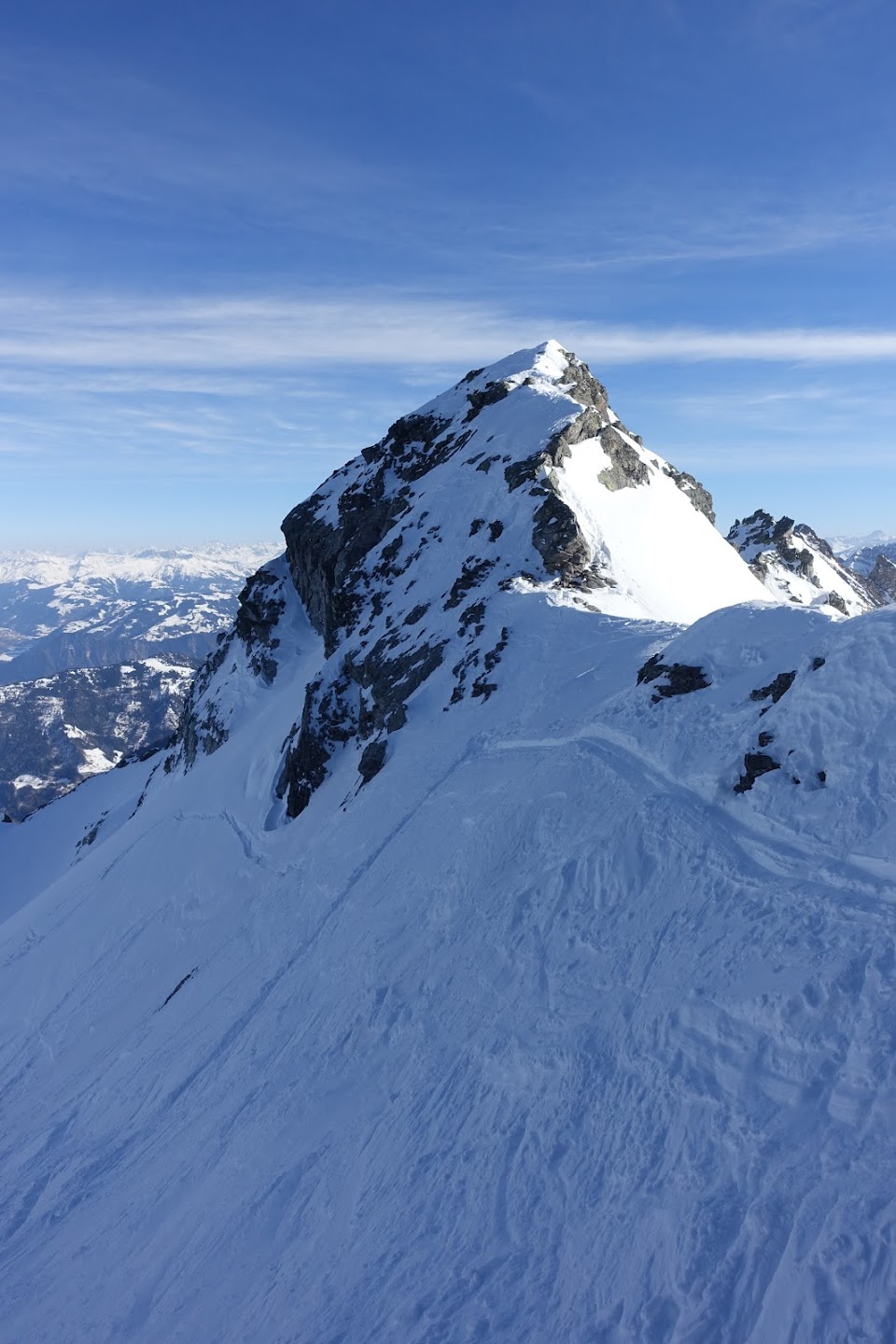 This is how steep the part over glacier felt like.

The final 50 meters up were for crampons and an ice axe. In summer, there is a steel rope for the exposed parts. The way up was fine, I just have not looked down. 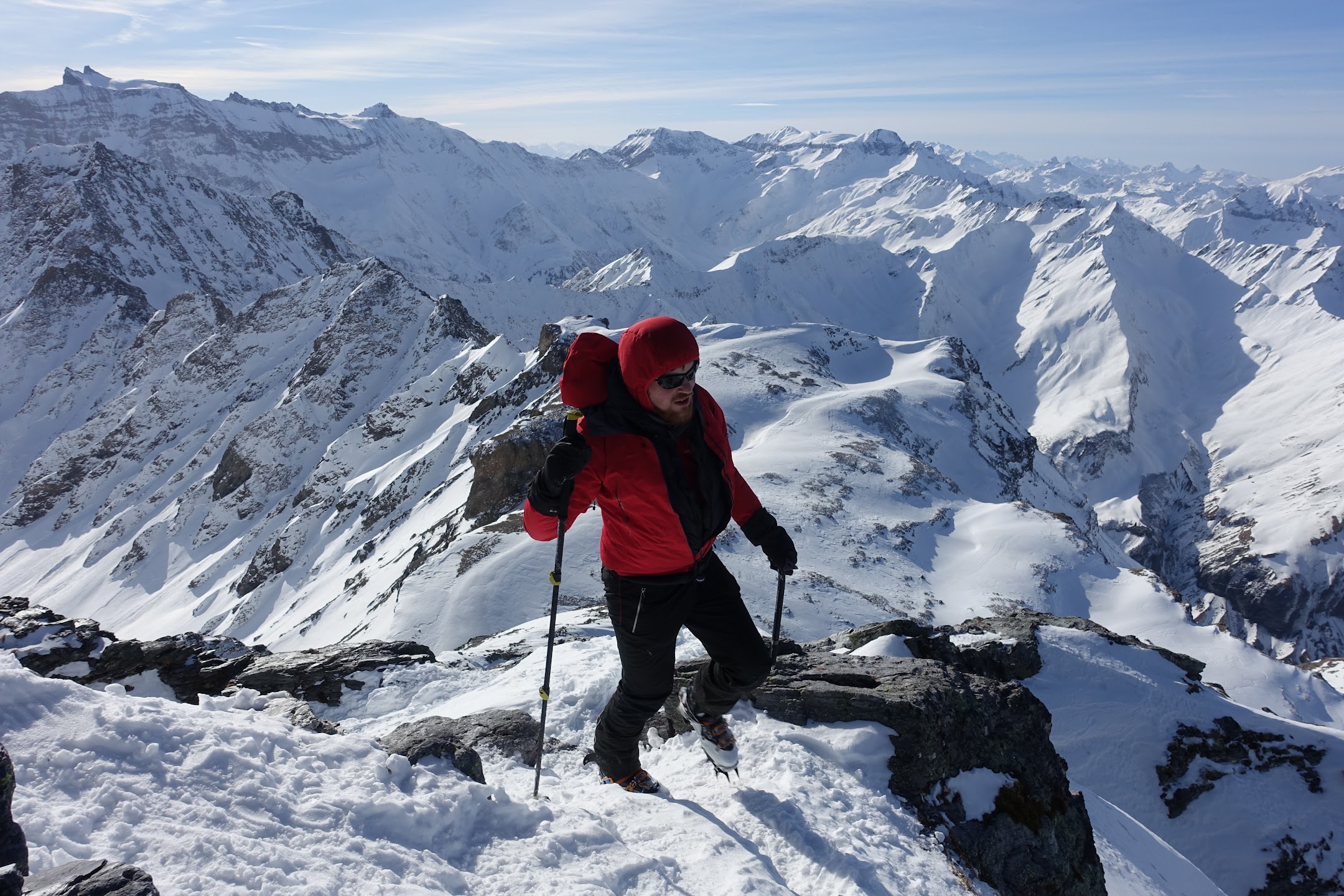 Tobi getting to the top. 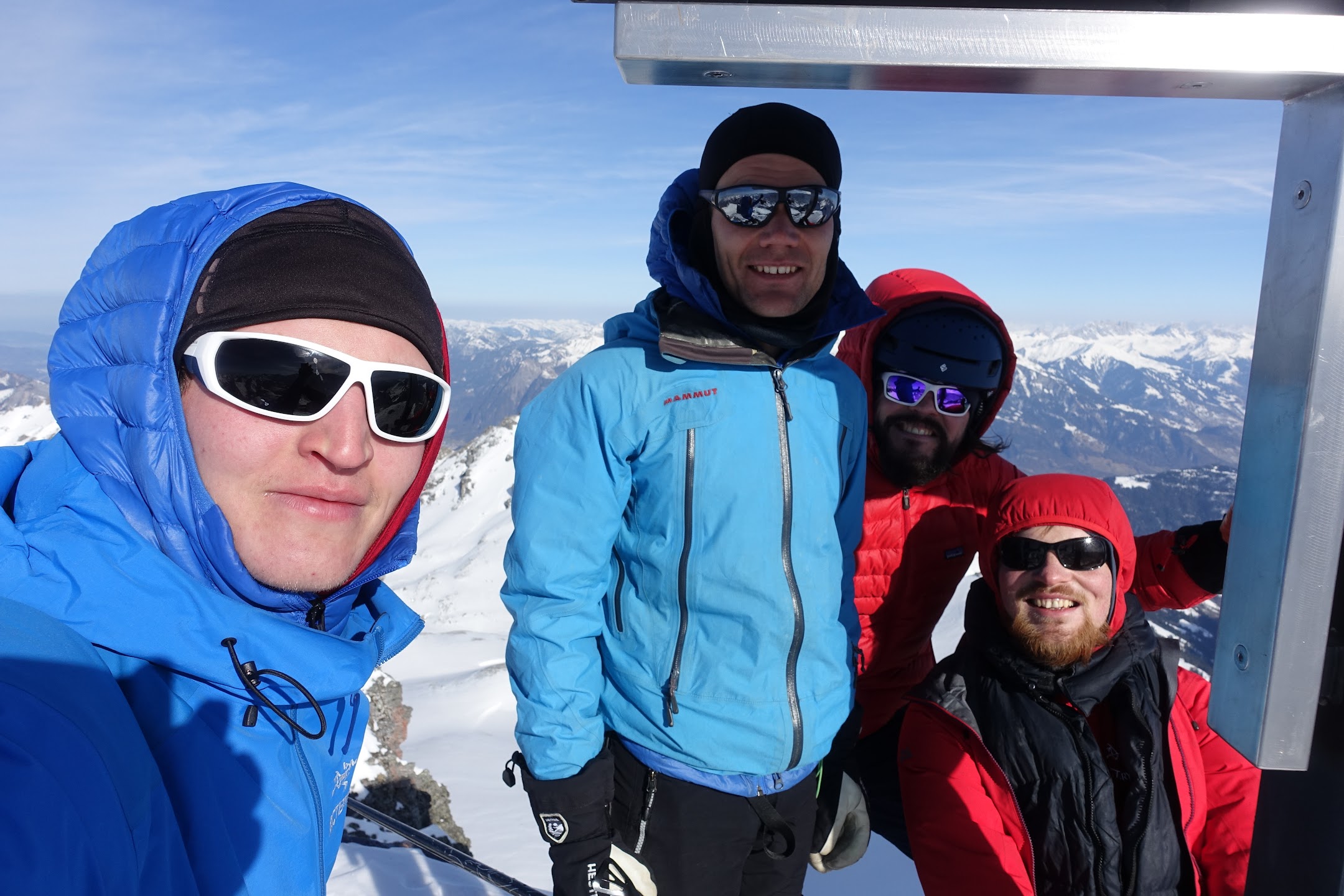 With Andrey, Jeff, and Tobi. 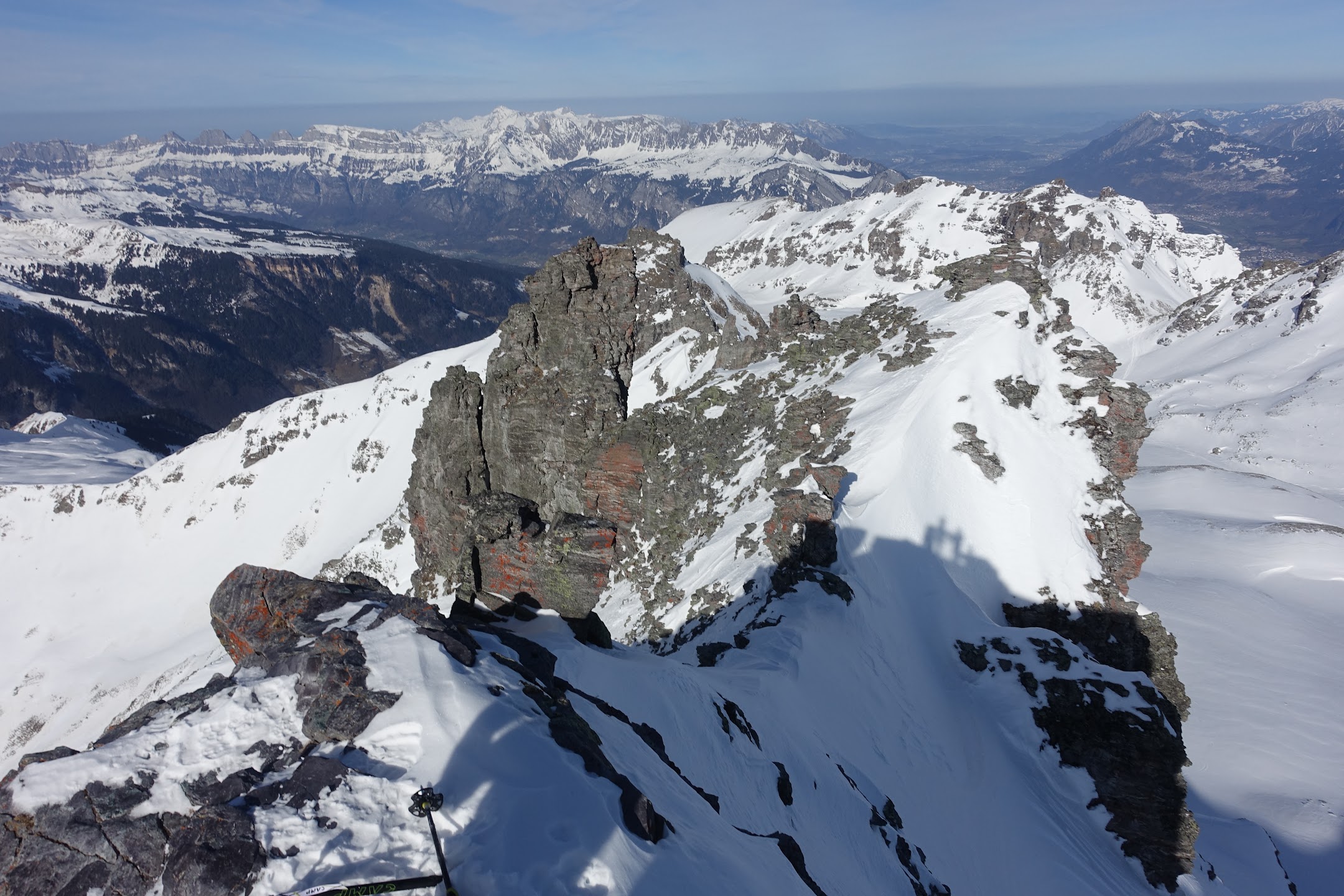 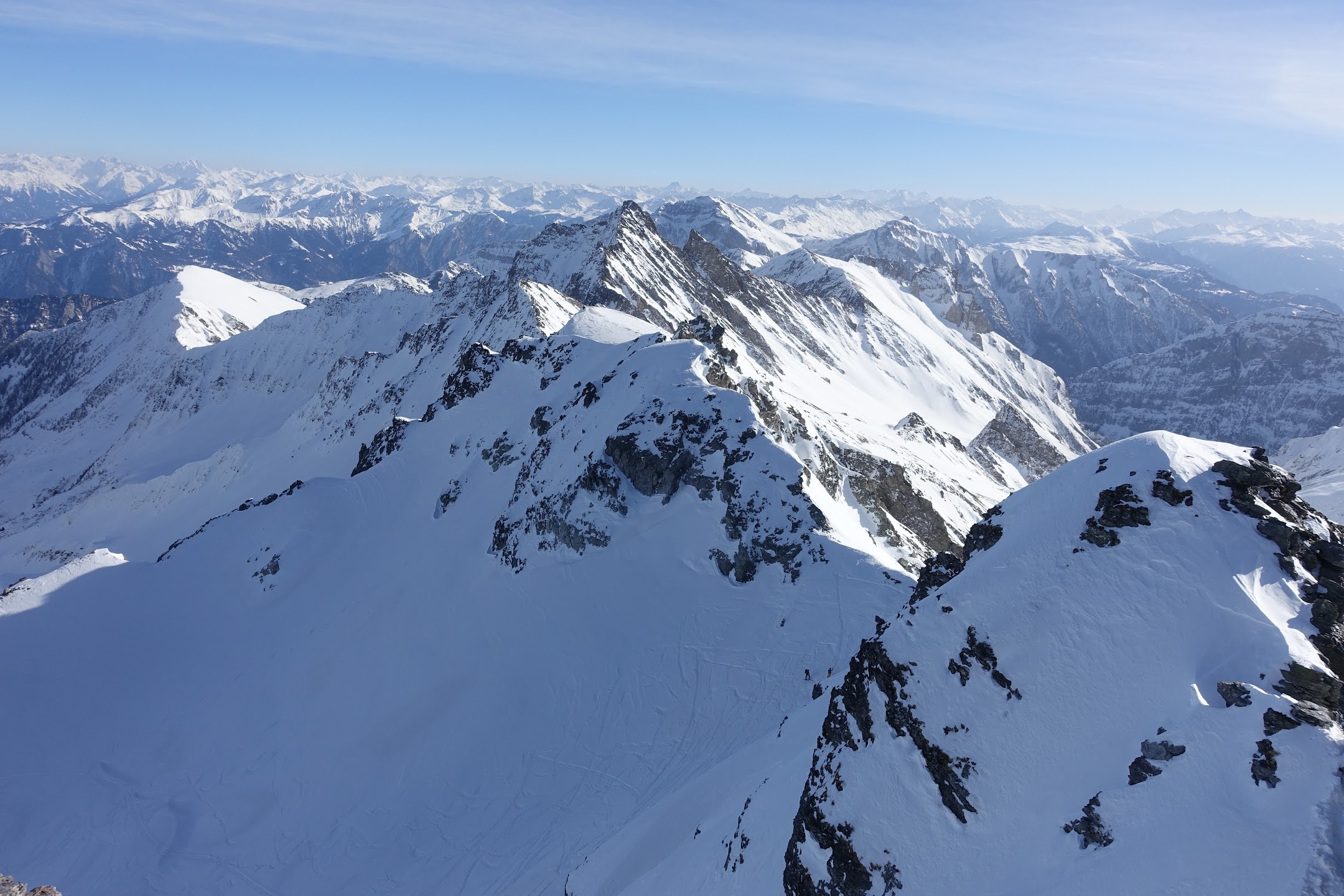 Some more pictures from the top. The views were amazing!

Halfway done, now the worse part, which is loved by most ski tourers, but not me and Tobi. We would prefer flying down, but not in this crazy wind. So with the help of more experienced, we climbed down the part with crampons and put on skis, committed to enjoying the powder. 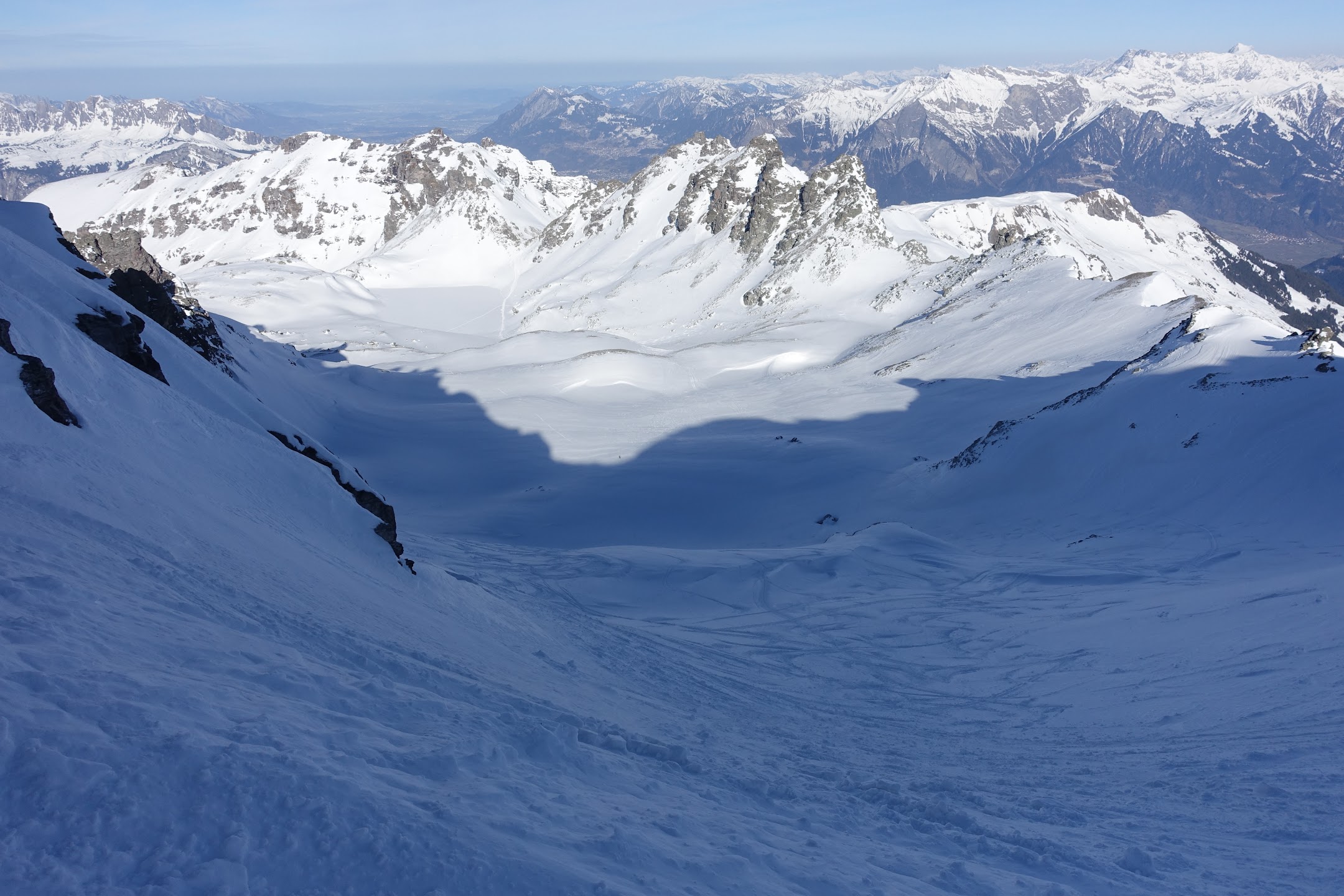 The wide-angle camera is making it less steep, so let’s use the pink glasses of the camera. I can ski this down!

After the initial 20 meters, I realized that the snow is really perfect, I got some confidence and started enjoying the way down :). At some moment, my tracks maybe even looked nice. Anyway, I had to fall at least once!

Once the slope got more gentle, I started to carve and found out that that is precisely how to ski powder. Instead of the classical technique, I should carve and tighten the turns by bouncing from the snow. The only issue is that compared to carving skis, touring skis are so light that they do not hold the direction so well.

I got some more feedback like this from Jeff (thanks mate!) before we got back to the ski resort. There was the right place to test the skis, how they carve, and how agile they are. And they are agile and carve tightly :). If I get used to how light they are, maybe I will consider them my best skis ever. 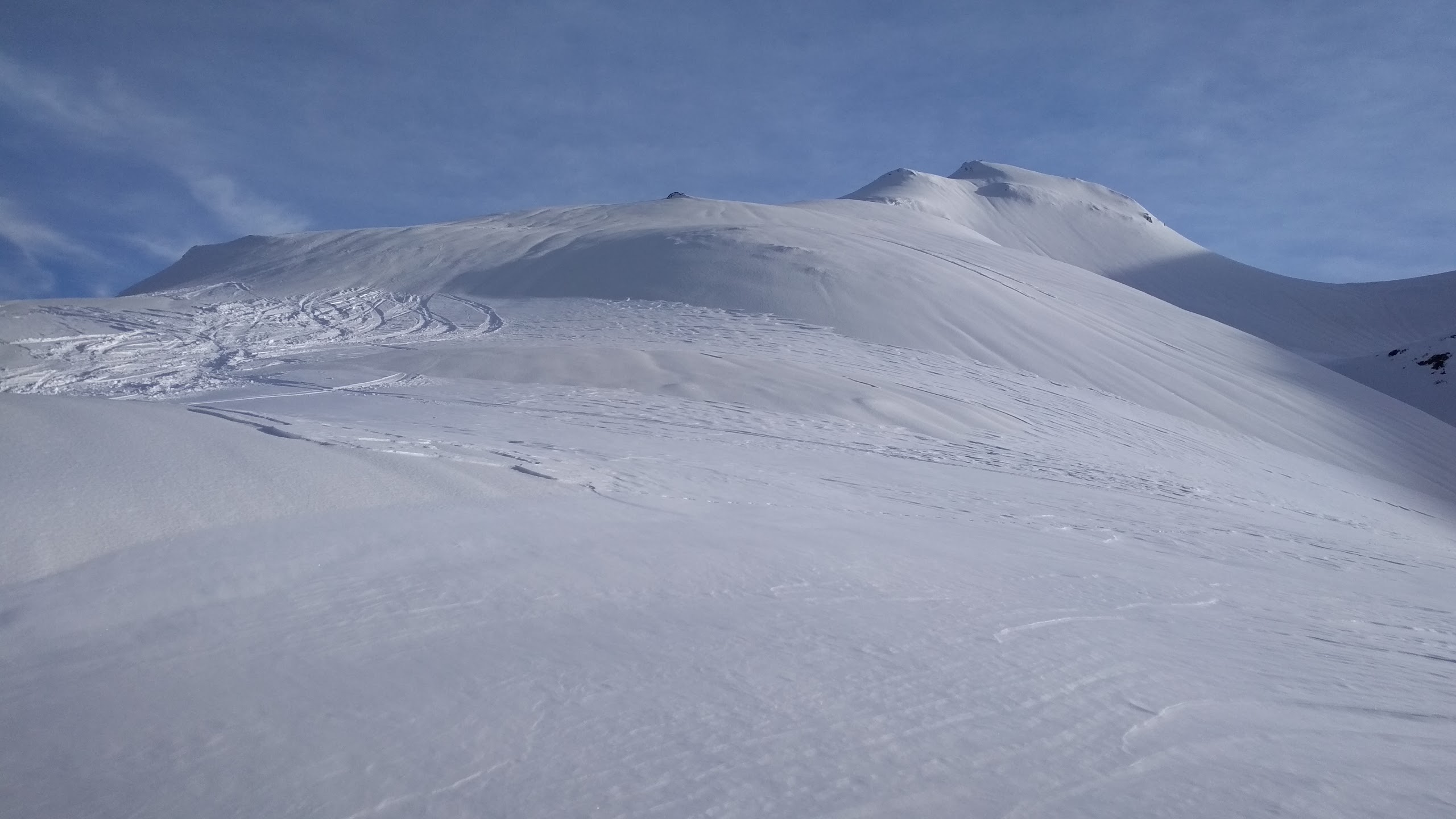 White wherever you look, a rare occasion this winter.

This ski tour was classified as red on the scale blue - red - black. I asked Tobi to remind me that I shall not try black (at least for a while). This tour was a perfect mix of a challenge, but I still felt safe. Maybe already this tour with worse snow would be too much for me. I should take my time to progress, being a good resort skier (Czech good, so Swiss intermediate) means so little for ski touring. Hopefully, I will have more opportunities to train this winter, as the forecast predicts snowing the whole week.