This is going to be rather a short post, as you can guess, I have not done many flights since the last post.

Shortly about the situation in Switzerland, as many ask me how CH handles Corona. You can skip to the next section if you want to read just about the flying.

Given the border with Italy, specifically Lombardy, and 20k commuting workers from IT to CH, we got hit quite fast and significantly. I was surprised to read about stricter restrictions in the CZ with 10 times lower numbers of infected, but seeing (first wave) aftermatch, it worked quite well.

What were the restrictions that hit me?

I work from home and I will at least till the end of August. To be honest, I expect to work from home until the vaccine is out. Organized sports events were forbidden, so no flying with school, or technically speaking even with friends if we plan it. Recommendation to avoid extreme sports, as potential injuries would block hospitals. Local paragliding clubs anyway closed their takeoff and landing sites. These restrictions/recommendations were valid March 16 - April 20. On April 20, recommendations are no longer to avoid paragliding, but rather to keep hygiene. Social distancing in paragliding means that if someone sneezes below you in a thermal, you have to leave the thermal :D.

I have not given up my hobby completely, I went flying once during the strictest restrictions, and once after them. I also went groundhandling several times, which is not forbidden, which surprisingly ended up once by being kicked from the place by police, though I did everything legally (and that was after April 20).

Hike and fly in Isenthal

It was difficult to stay at home during the amazing March and April weather. On April 5, I found out that my flatmates also have nothing to do, so I planned a hike to an area that is kind of close to Zurich (within 1 hour by car), but still very remote to tourism. Isenthal is such a place for sure.

We drove there with Yannick’s car, and we met at most 10 people during the day, so the risk was minimal. I took my wing to decide at the top of our hike if I want to fly down. 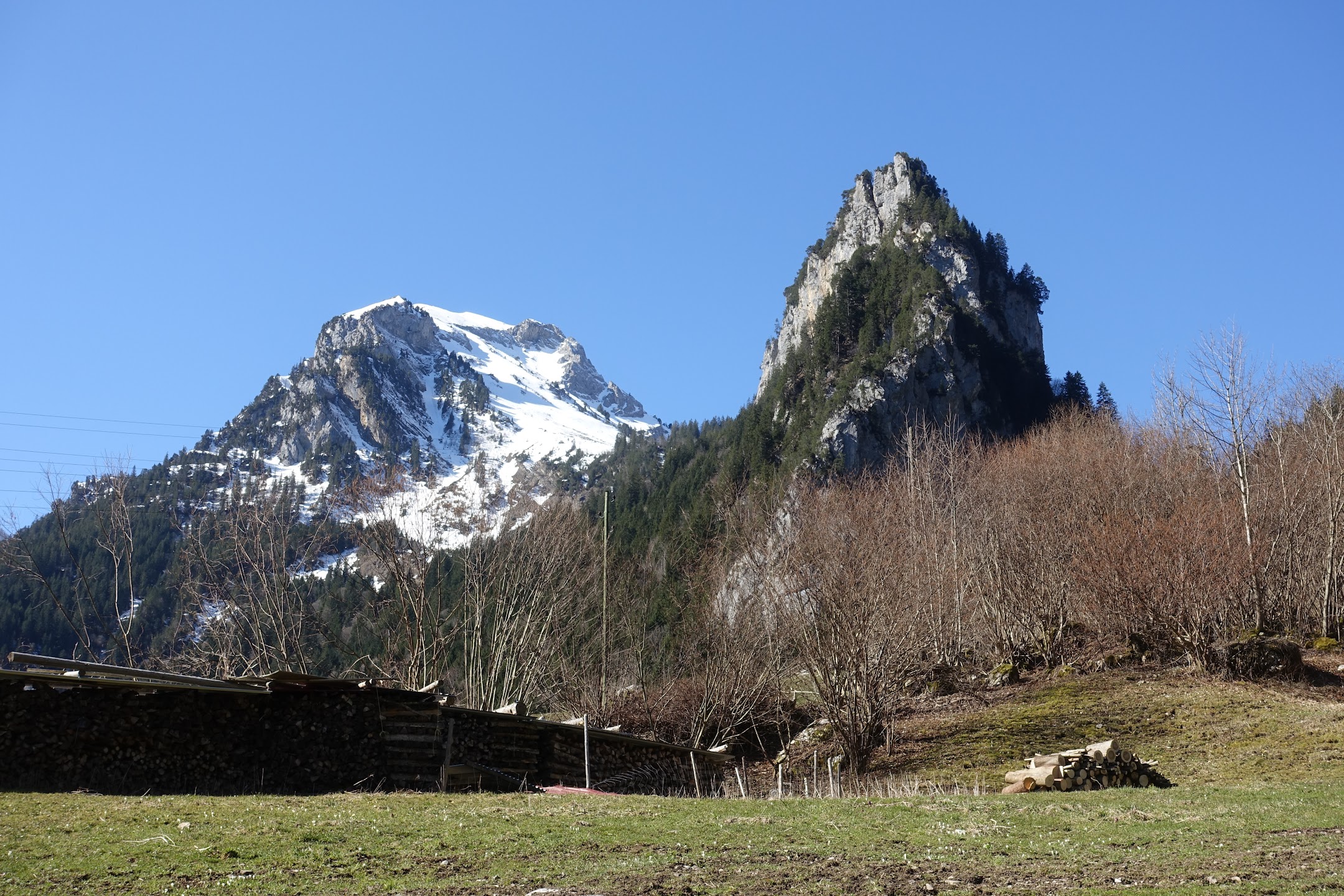 The first view we got.

I was amazed by the area, and since that hike, I recommended it to several people. I do not know if it was just my lows of mountain addiction because the pictures do not look that amazing. Also, Yannick kept saying the area looks like everything in Nidwalden (he is from that area). 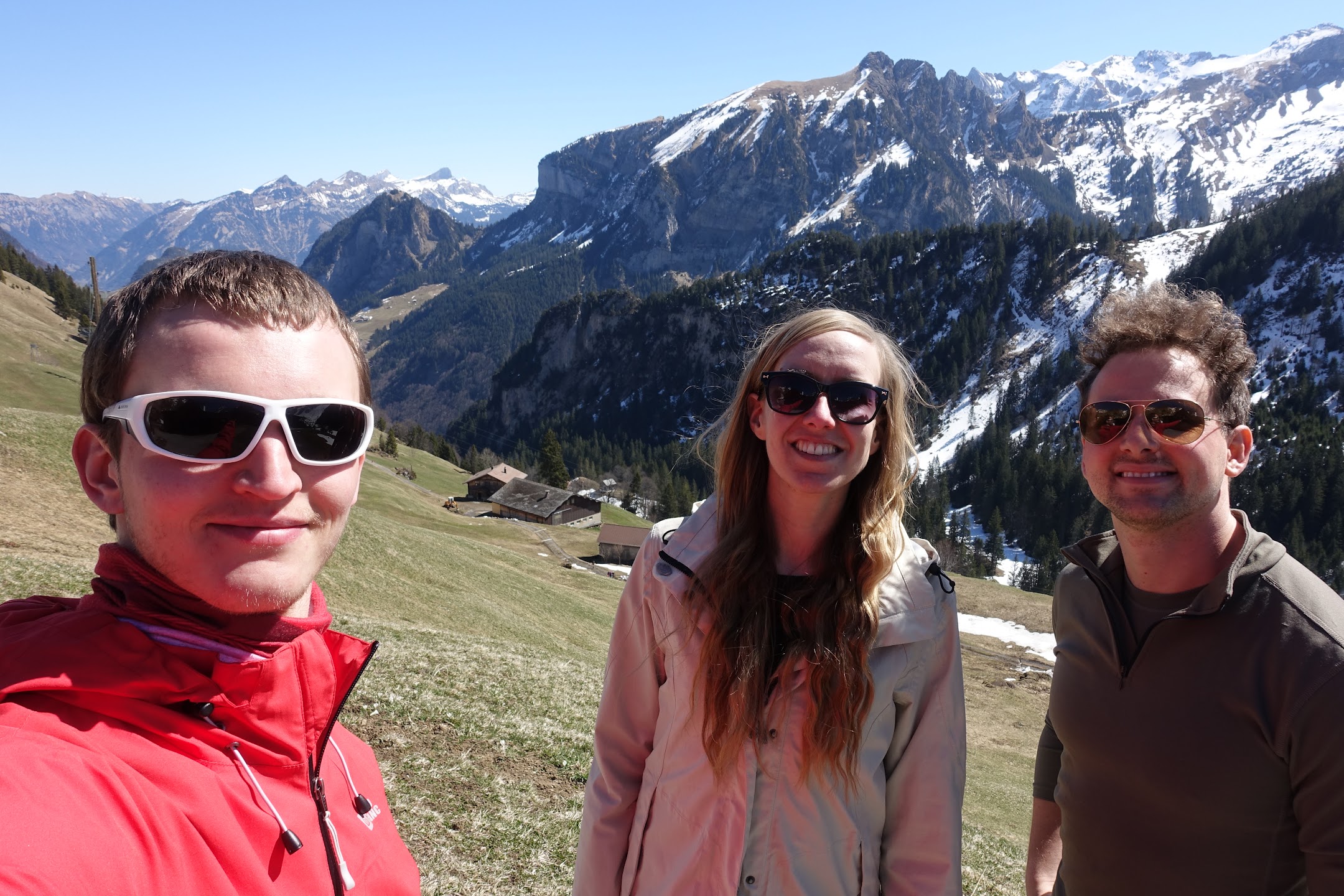 Our first hiking together picture!

We were amazed by one particular thing that won’t be possible to experience after the virus is over. Look up to the sky, and you won’t find any plane tracks! Take a moment to appreciate that fact as we did. 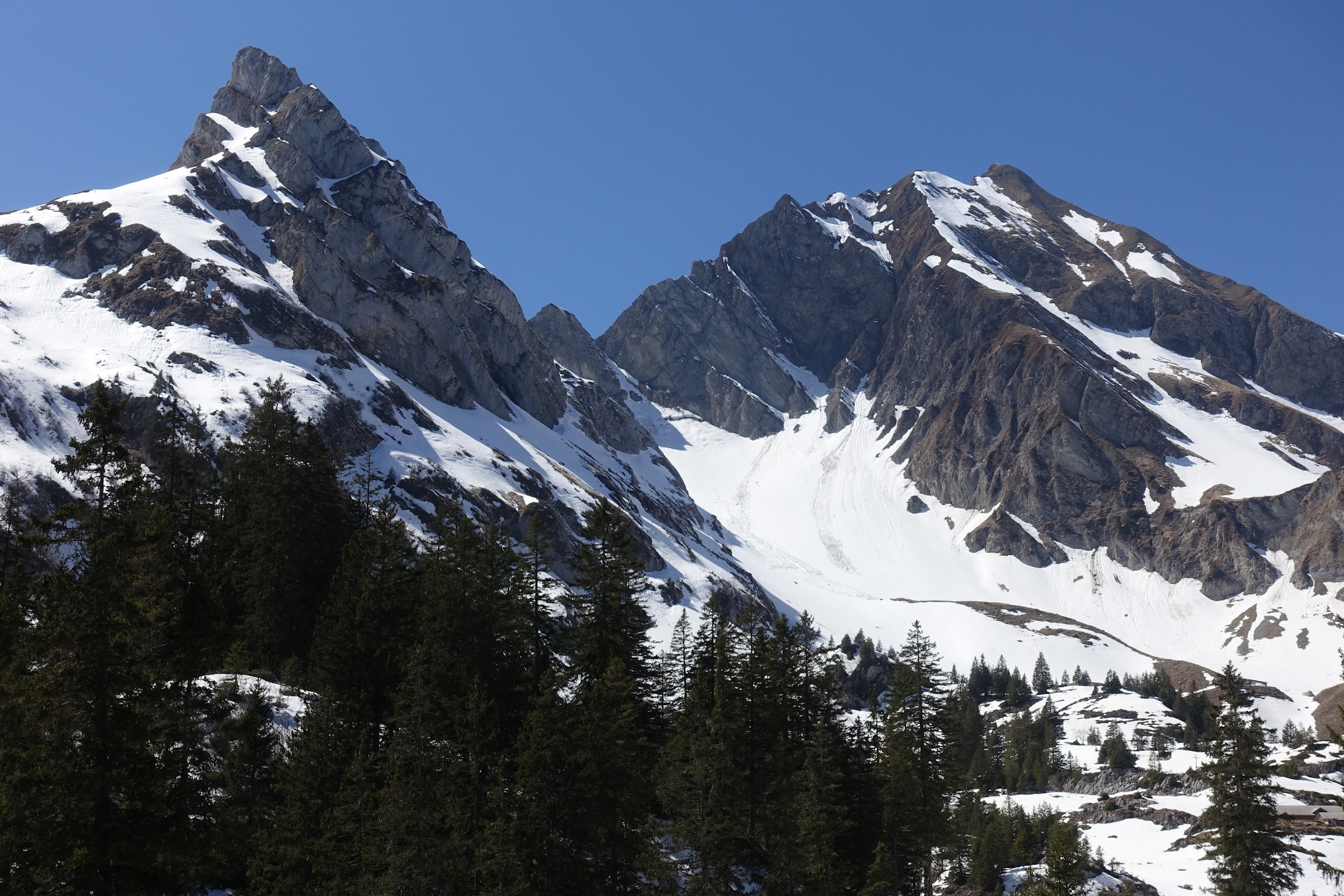 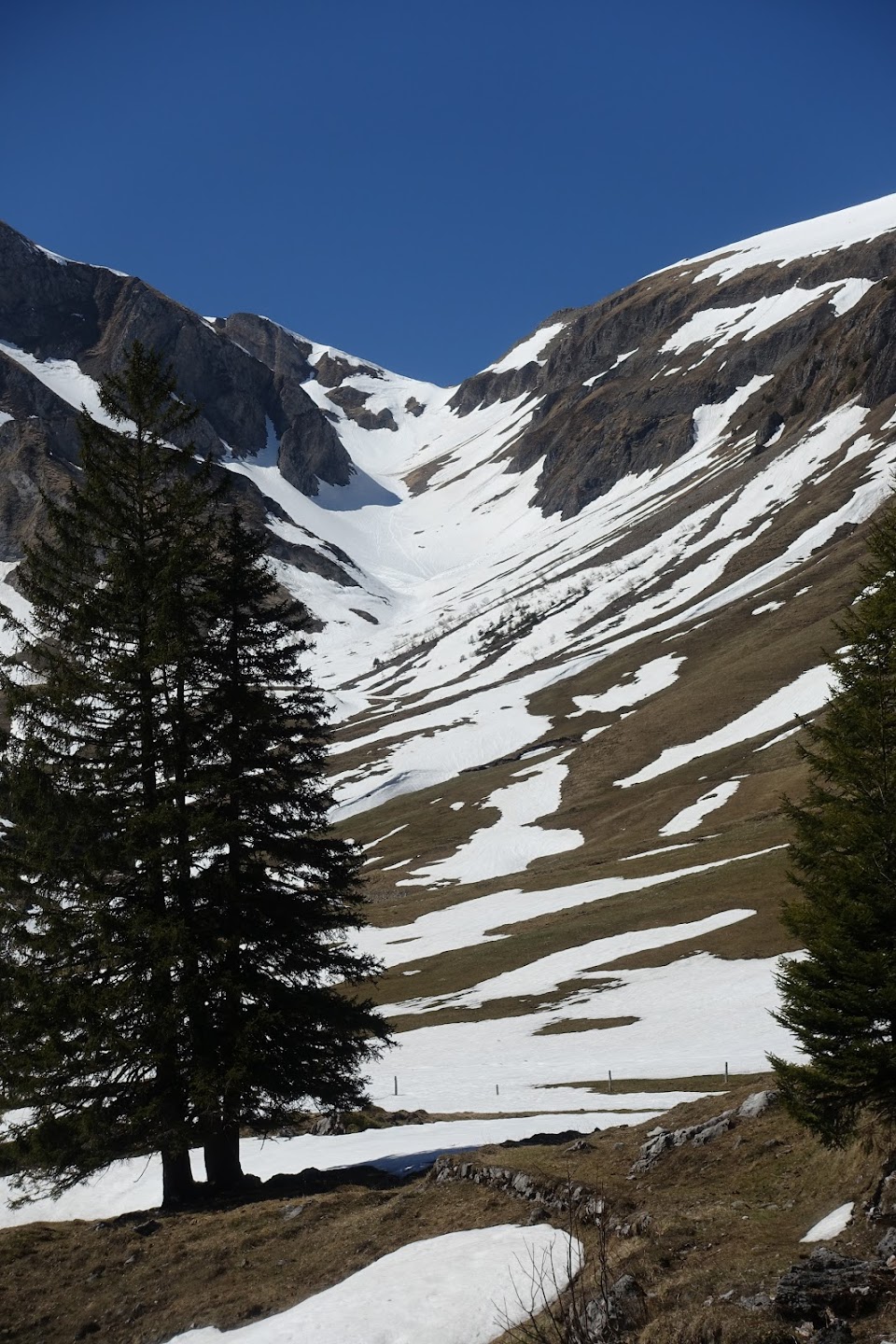 After walking a bit around, Yannick and Klara were about to hike down. And I was deciding whether to fly down. The forecast was perfectly safe, favorable wind, a tiny chance for thermals just from the sun, the wind masses were stable. The only hazard was the fact that Niedwalden is the canton of thousand of cables.

Screenshot from an avionic map, showing obstacles. All red lines are some cables, mostly farmer’s transport lifts. These cables are invisible when you stand close to them The whole red area is where it would be nicest to take off, given the flight opportunities. The blue highlight is my actual flight, crossing just one cable, with a huge safety margin. 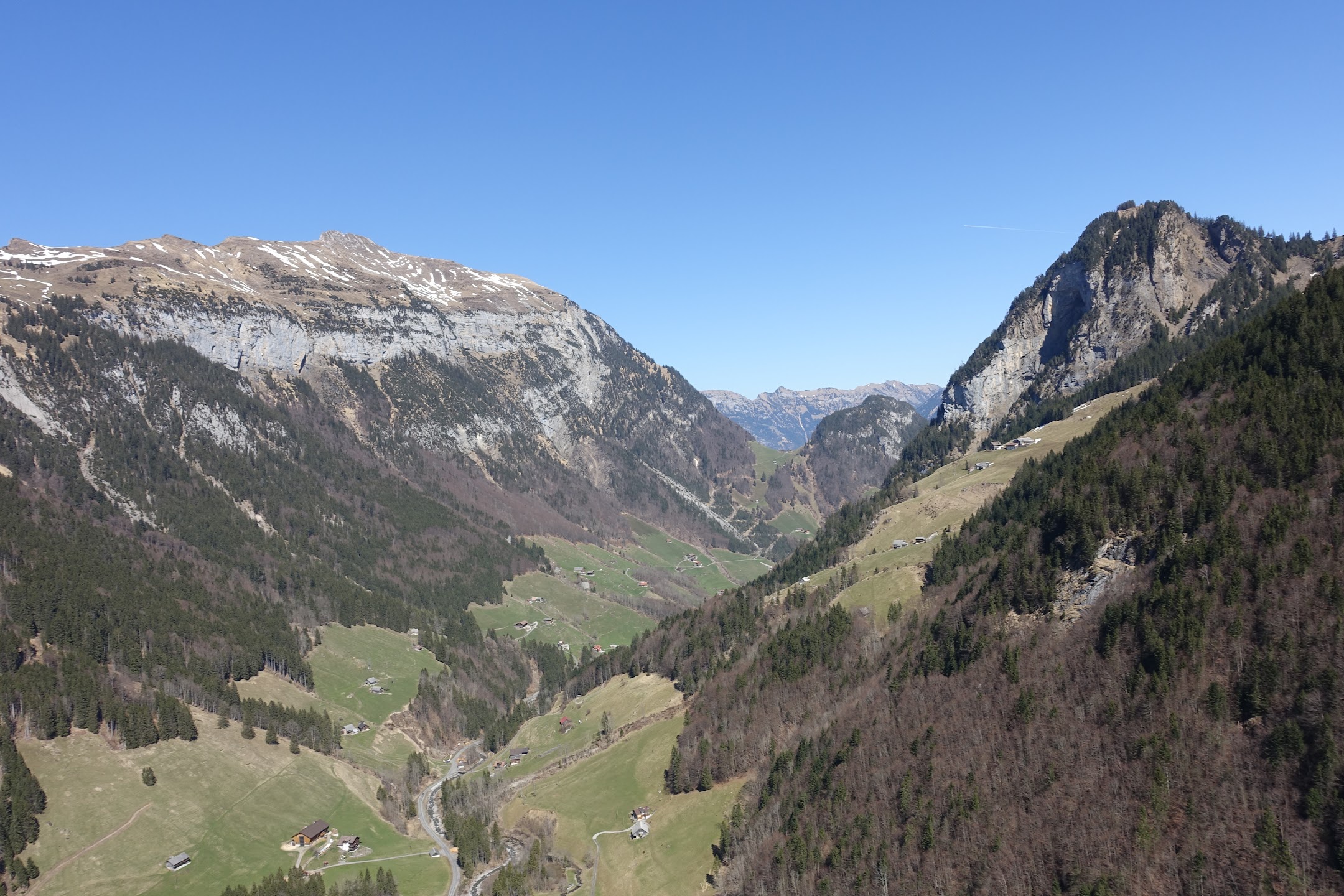 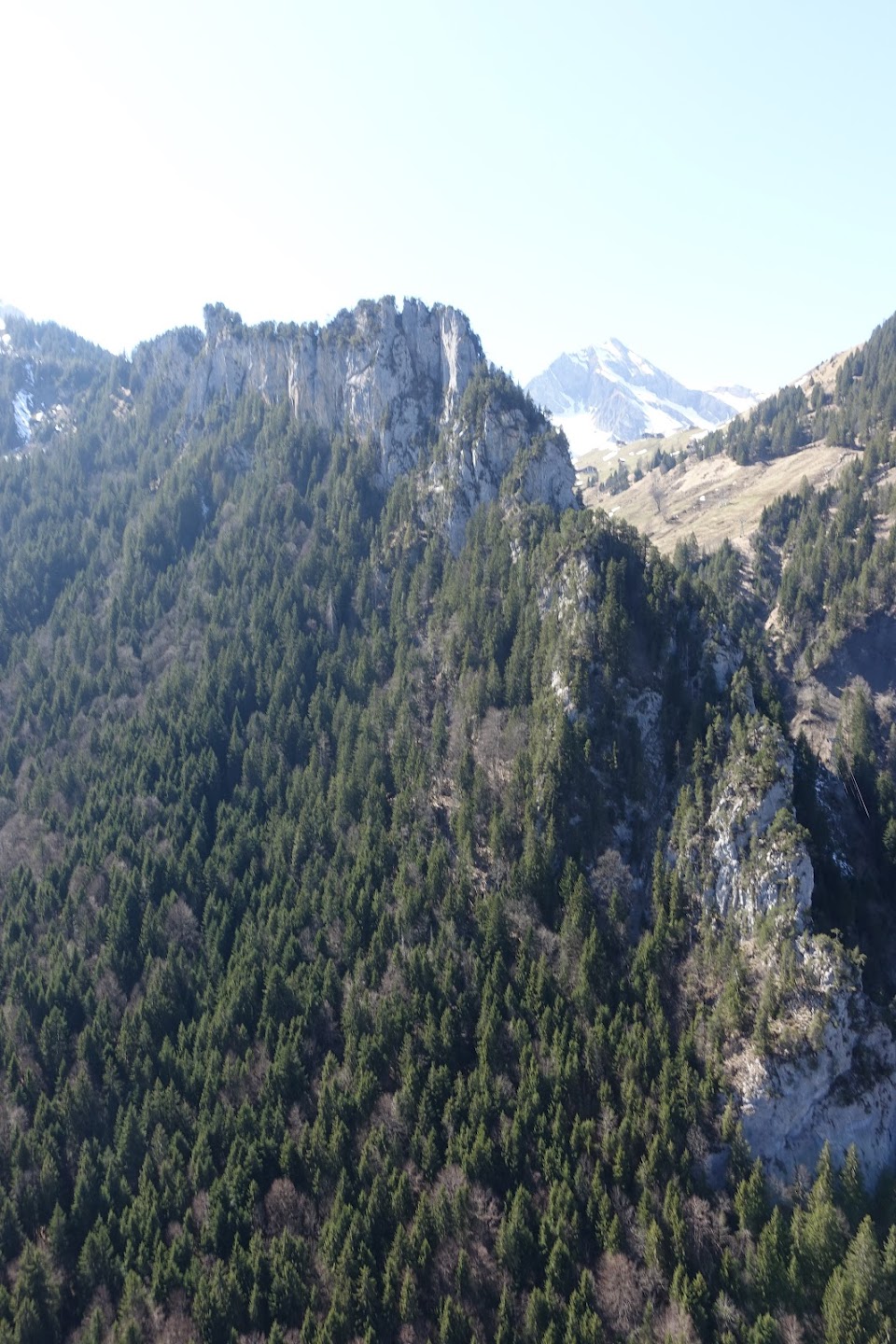 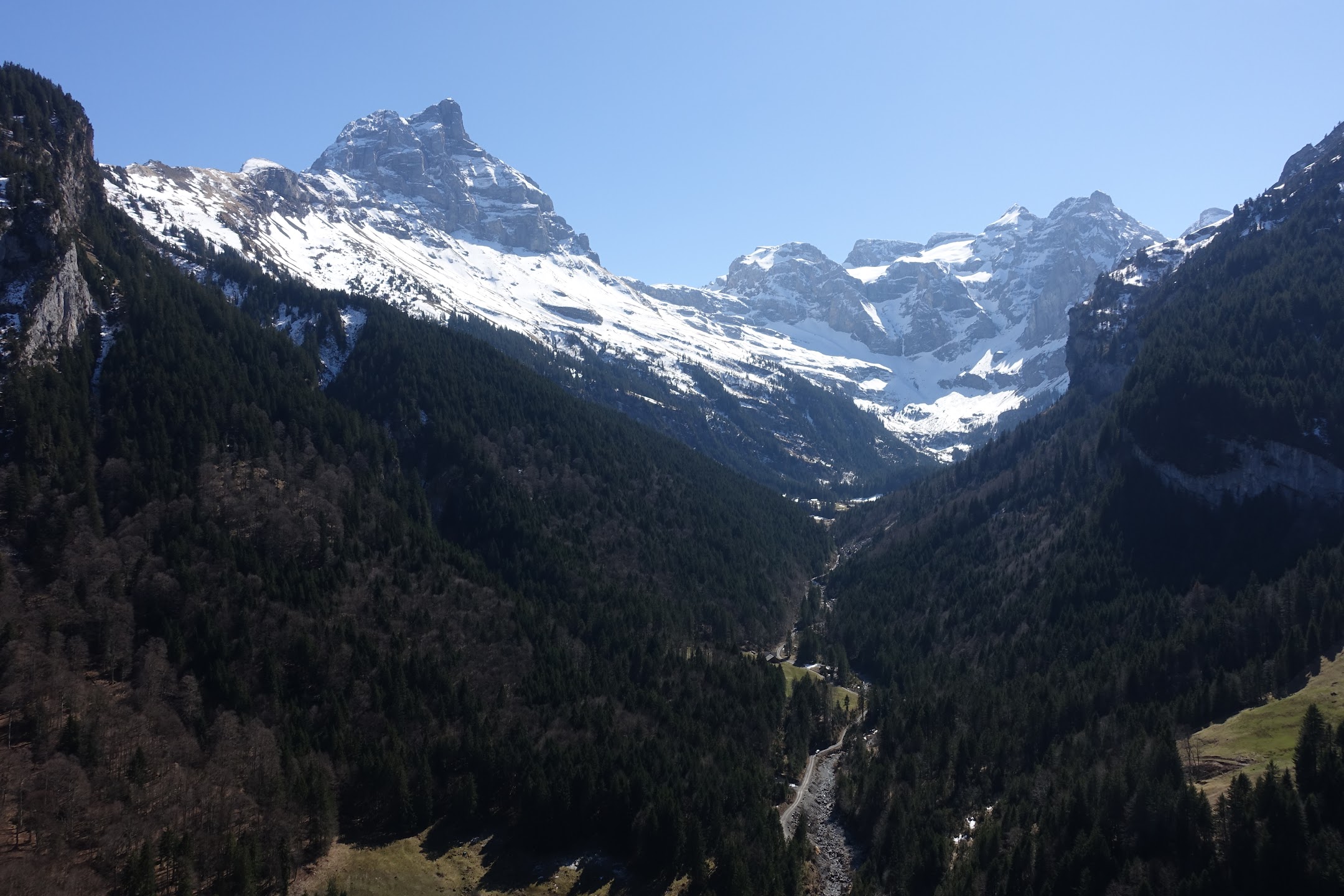 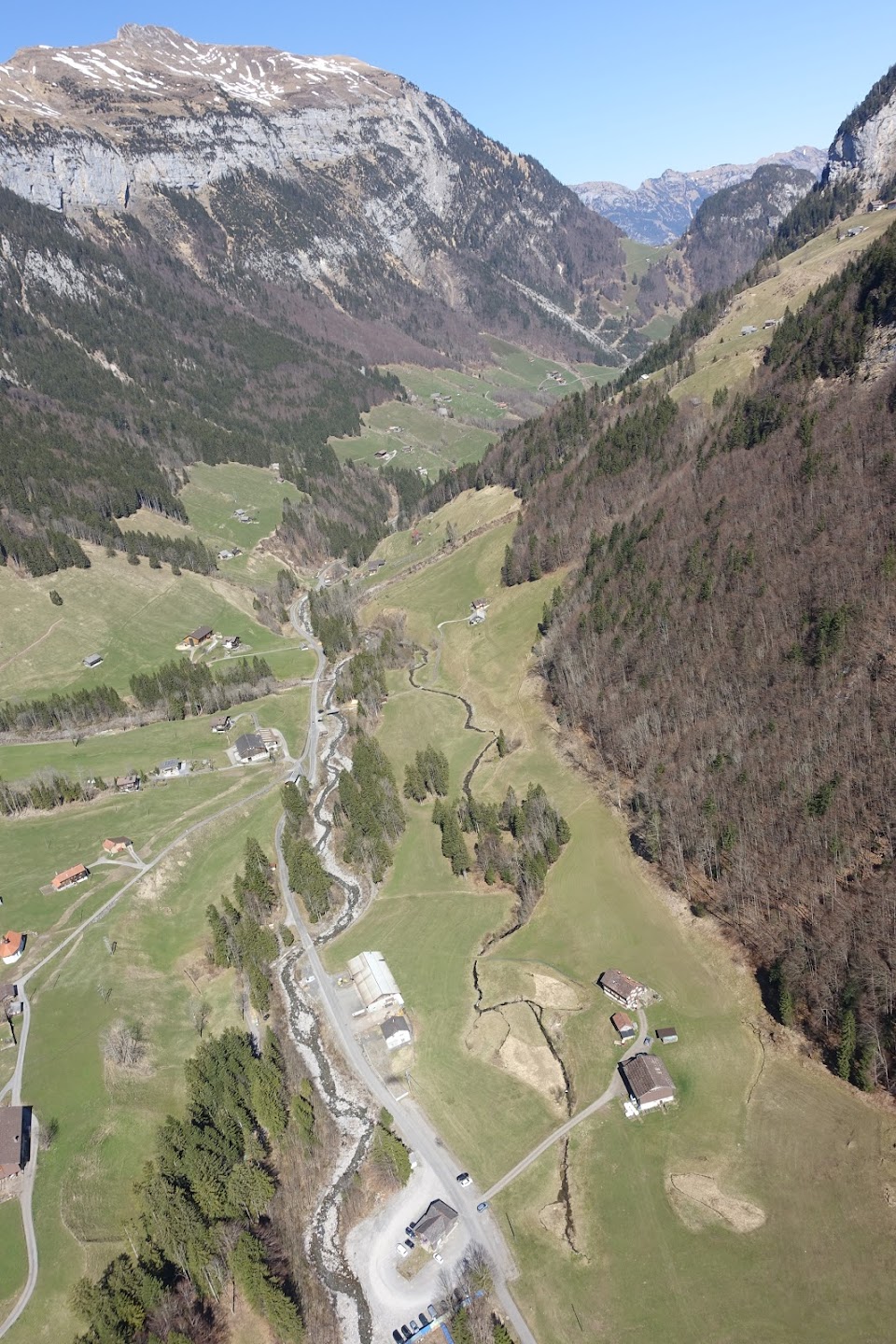 Engelberg is quite a touristy place in CH. Therefore it is surprising that I have not been there until April 27.

Tourists visit the area to take the rotating gondola to Titlis, I went to the opposite side of the valley, which is amazing for paragliding from 2 reasons. Thermals usually work there well, and the valley is protected from higher-level west winds (most common wind in CH). 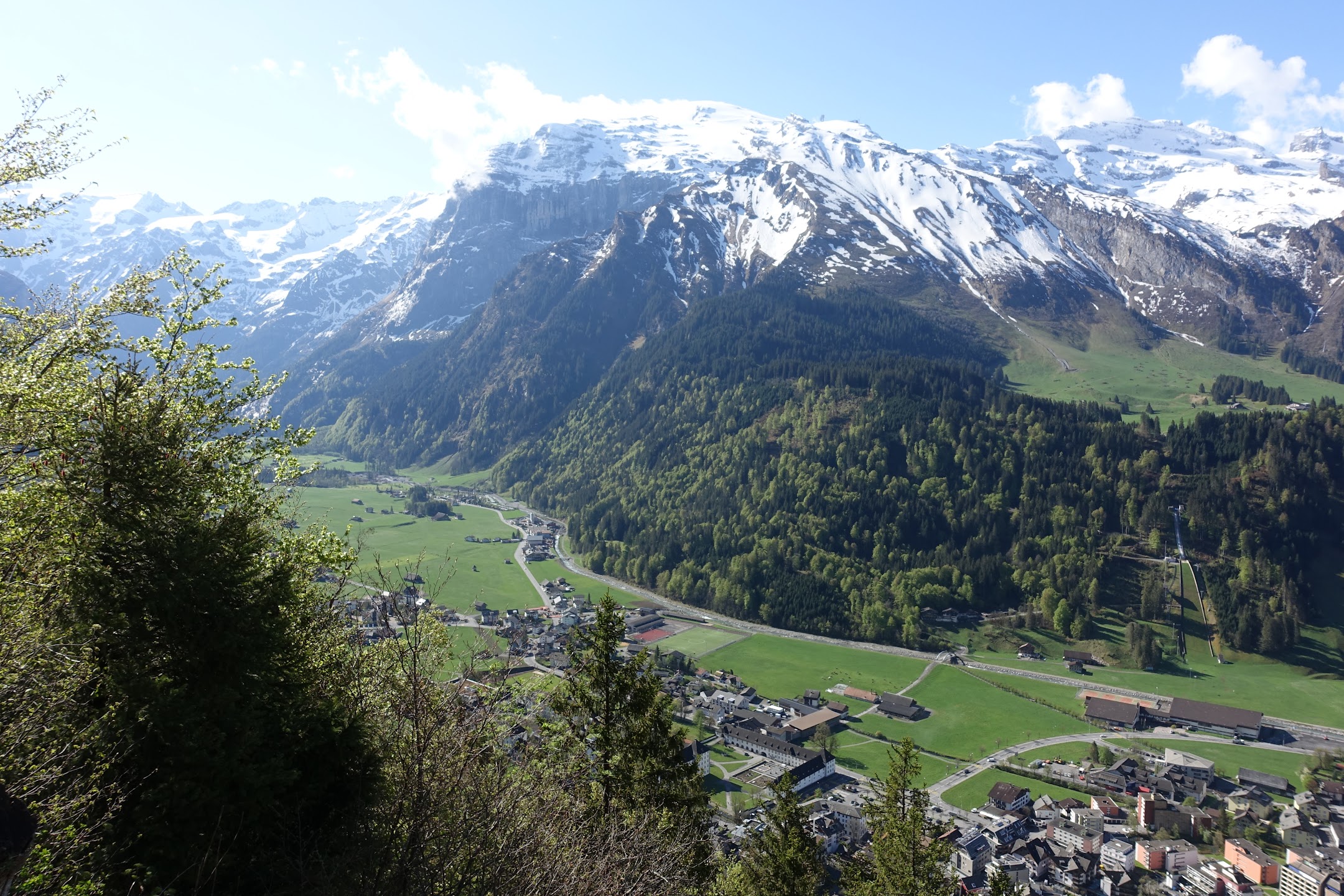 As it was Monday, the area was very calm. I am enjoying the fact that touristy places are quiet now. 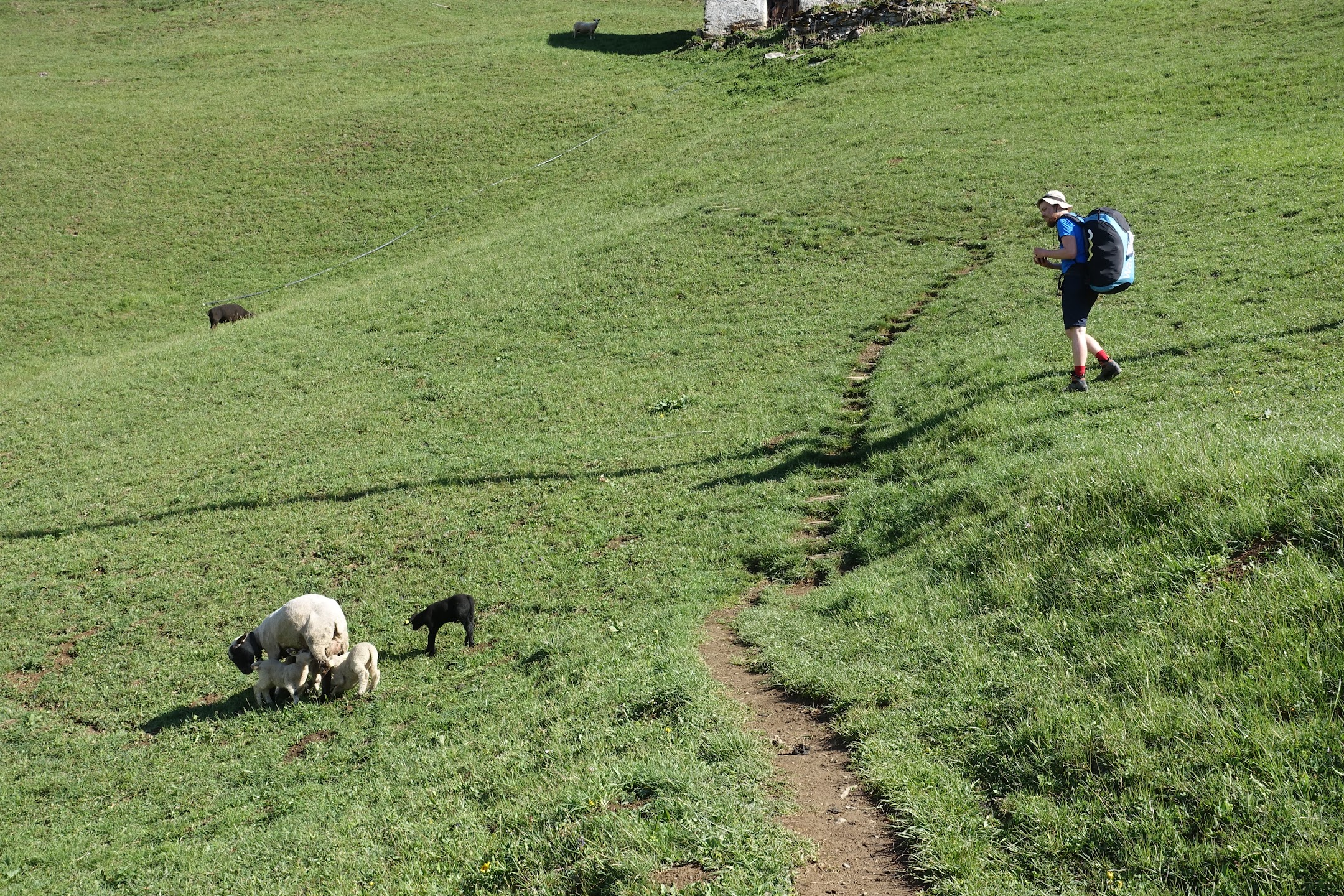 On the way up, we discussed the flying options. Thermals were supposed to be strong, and I wanted to do my first cross-country (XC) flight. 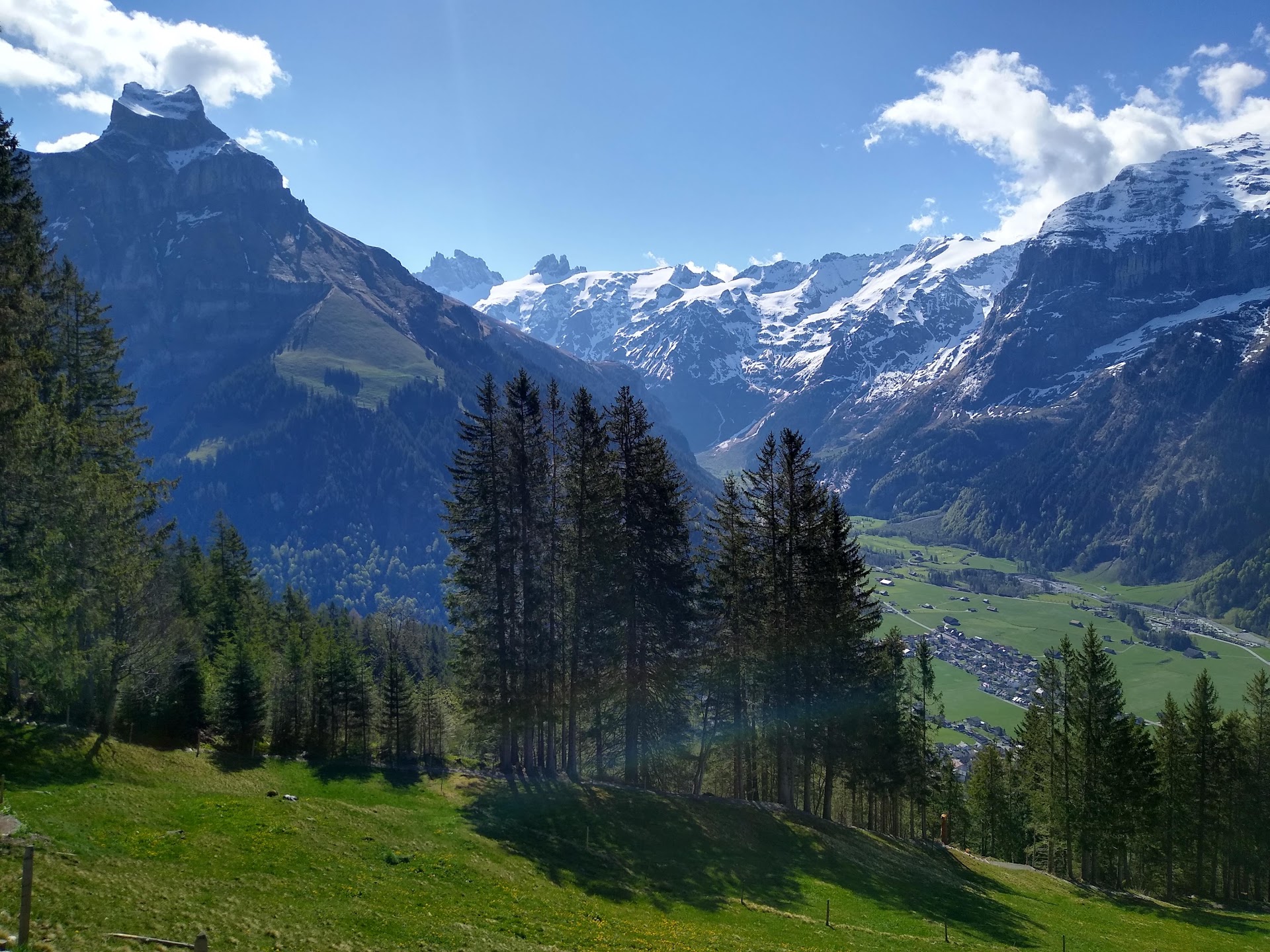 If I wanted to do XC, Tobi recommended me to fly towards the sharp peak on the left (Hahnen).

After hiking for 2.5 hours, we reached the takeoff by Brunnihütte at 1800 masl, about 800 m higher than the train station. Around us were 3 other paragliders, either on the ground or already in the air. The seemed to be working well, so we prepared and took off around 11:00. 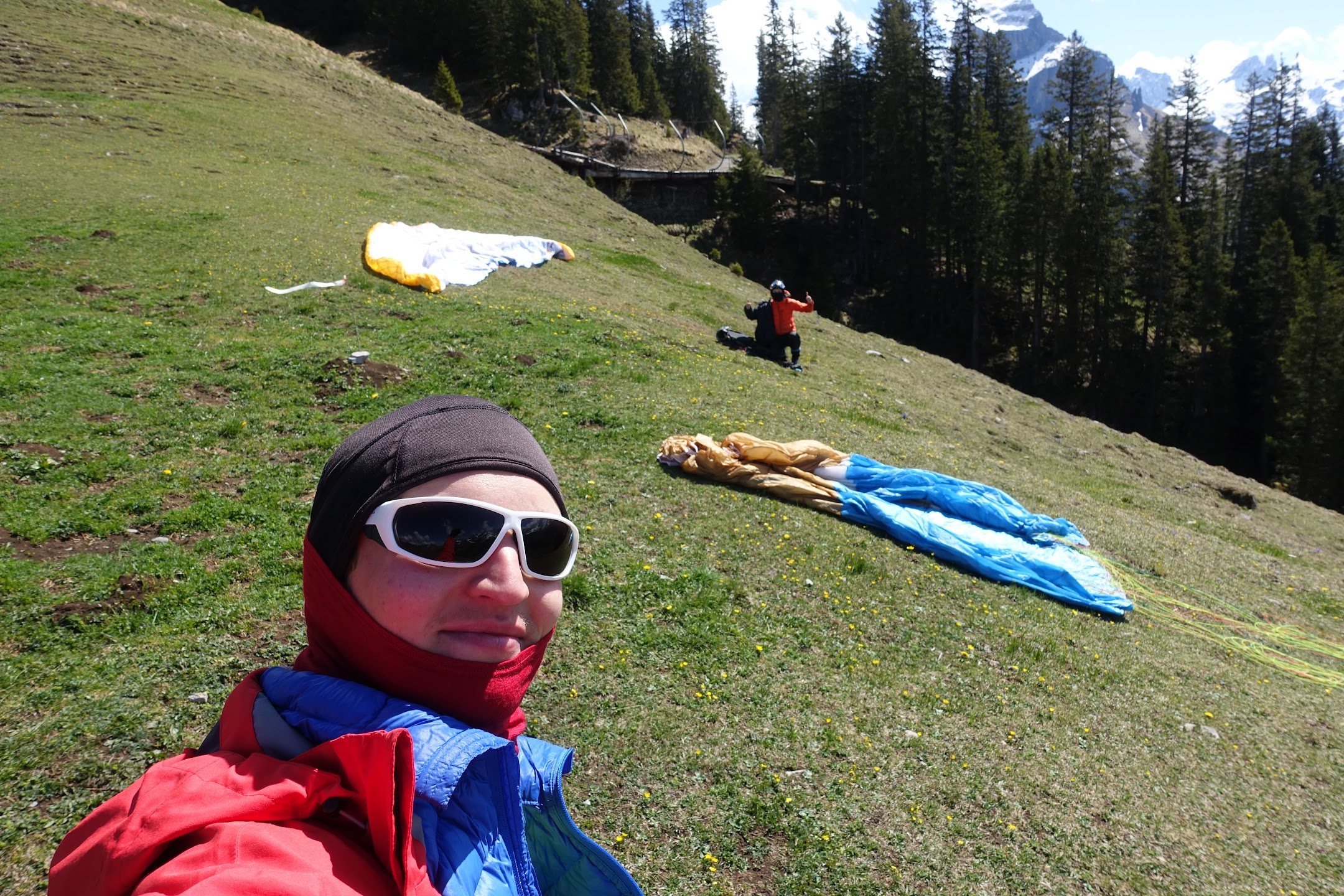 I am sweating as hell! It was about 15 °C, but for a long flight you want to be wearing down jacket and windproof jacket and pants.

I took off after Tobi and followed his path in searching thermals, with a bit of advantage of knowing where it does not work. I got quickly to the altitude of the takeoff, and in 20 minutes, I was in 2418 masl. That was the maximal altitude, as the high-level winds blocked thermals from rising even higher.

At that altitude, I decided to try to fly in the planned direction towards Hahnen. It was a stupid decision, I should have left Tobi to try it first, he is more experienced and flies a better wing, so he would find out it does not work, but he would get back to thermals to me. But that was not my case, I just lost the altitude, have not found any thermals and had to land in Engelberg after 33 minutes in the air.

What to do at 11:43 on a sunny day when I am taking a vacation? I decided to pack and hike the 800 m up again. I was faster alone, hiking up in about 1.5 hours. At 14:00, when the thermals are usually strongest, I was ready for my second attempt. 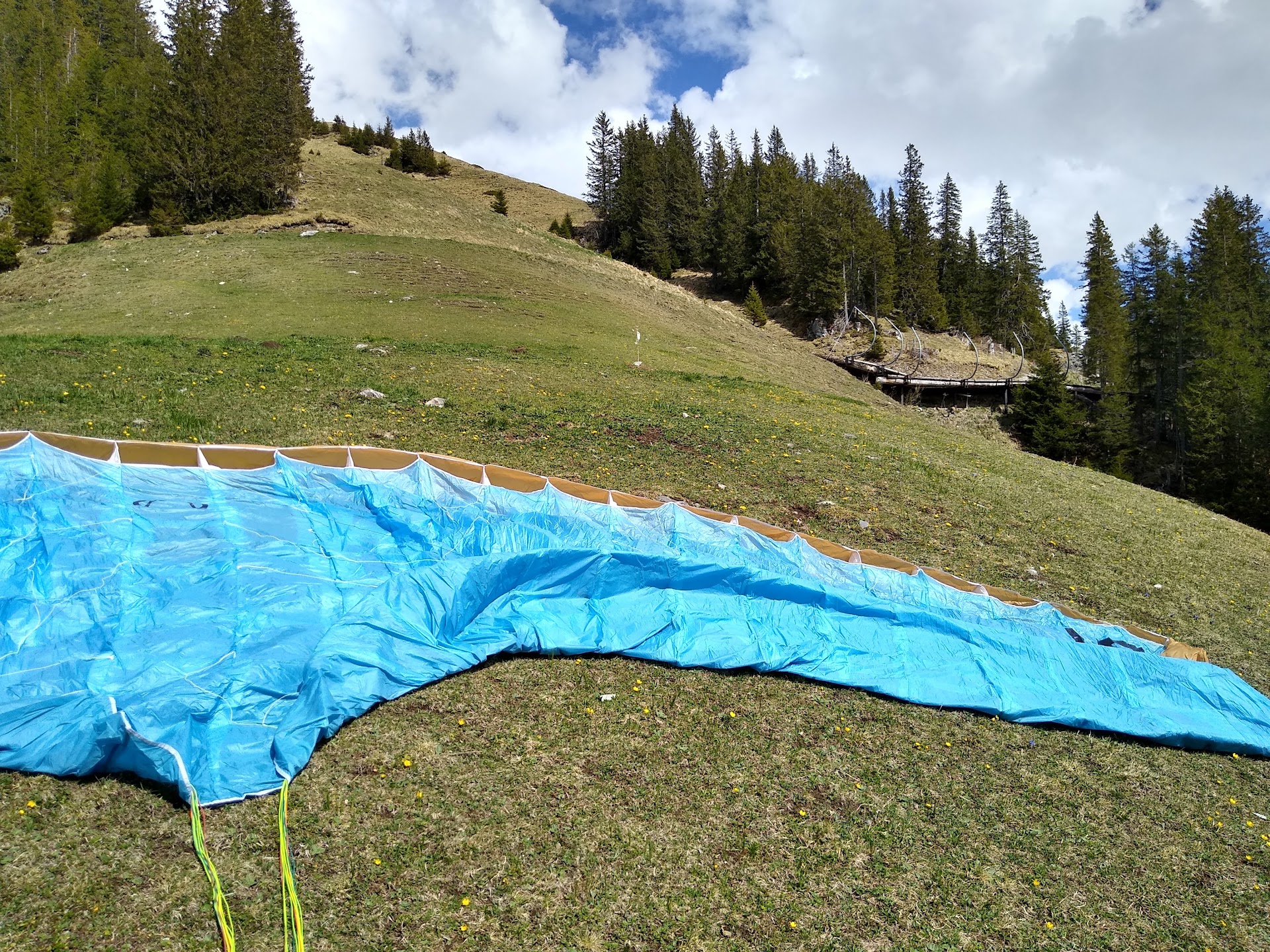 But as the valley winds changed, thermals were not working at all. My second flight was just 15 minutes long, and sinking that fast the tough hiked up meters was tormenting. 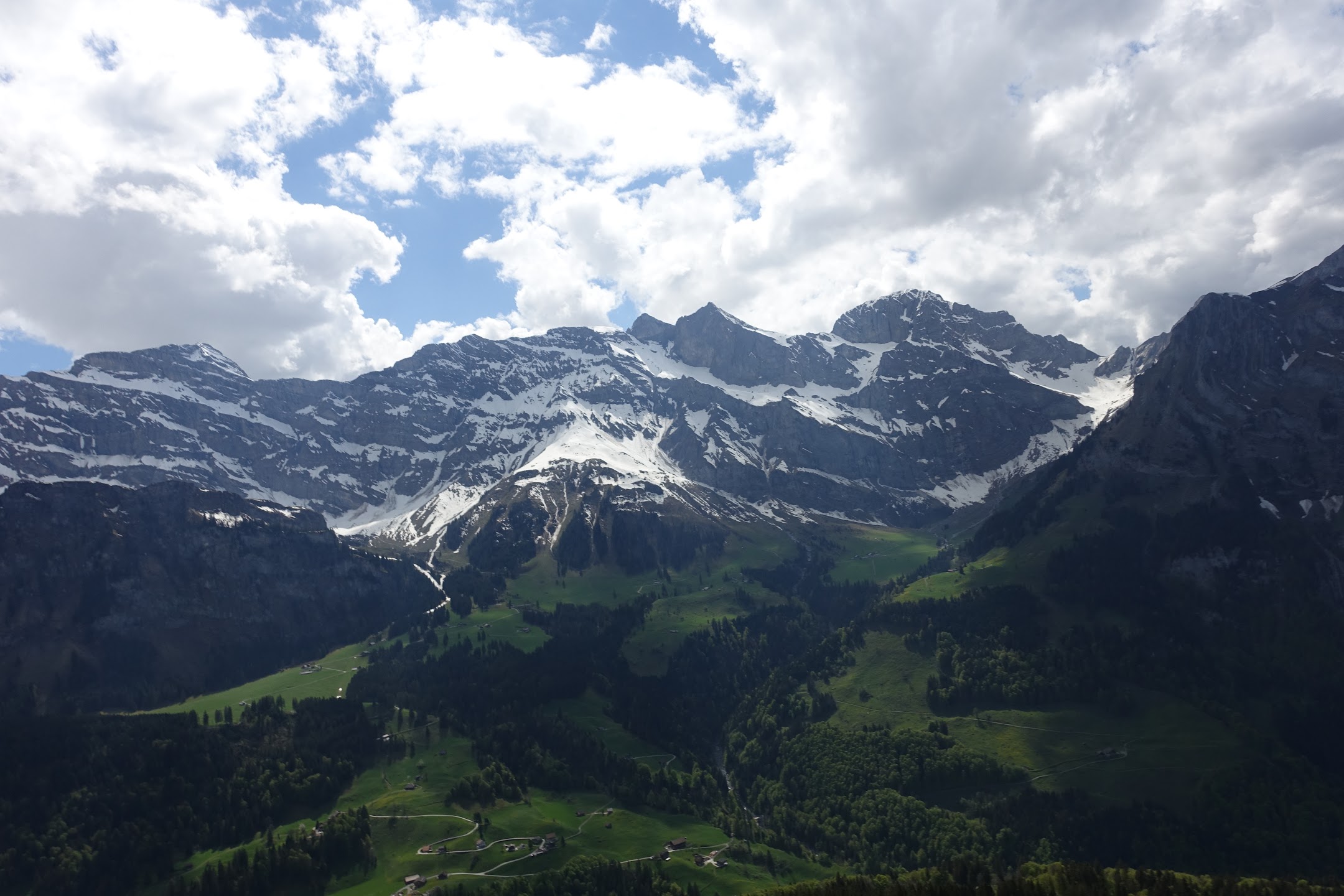 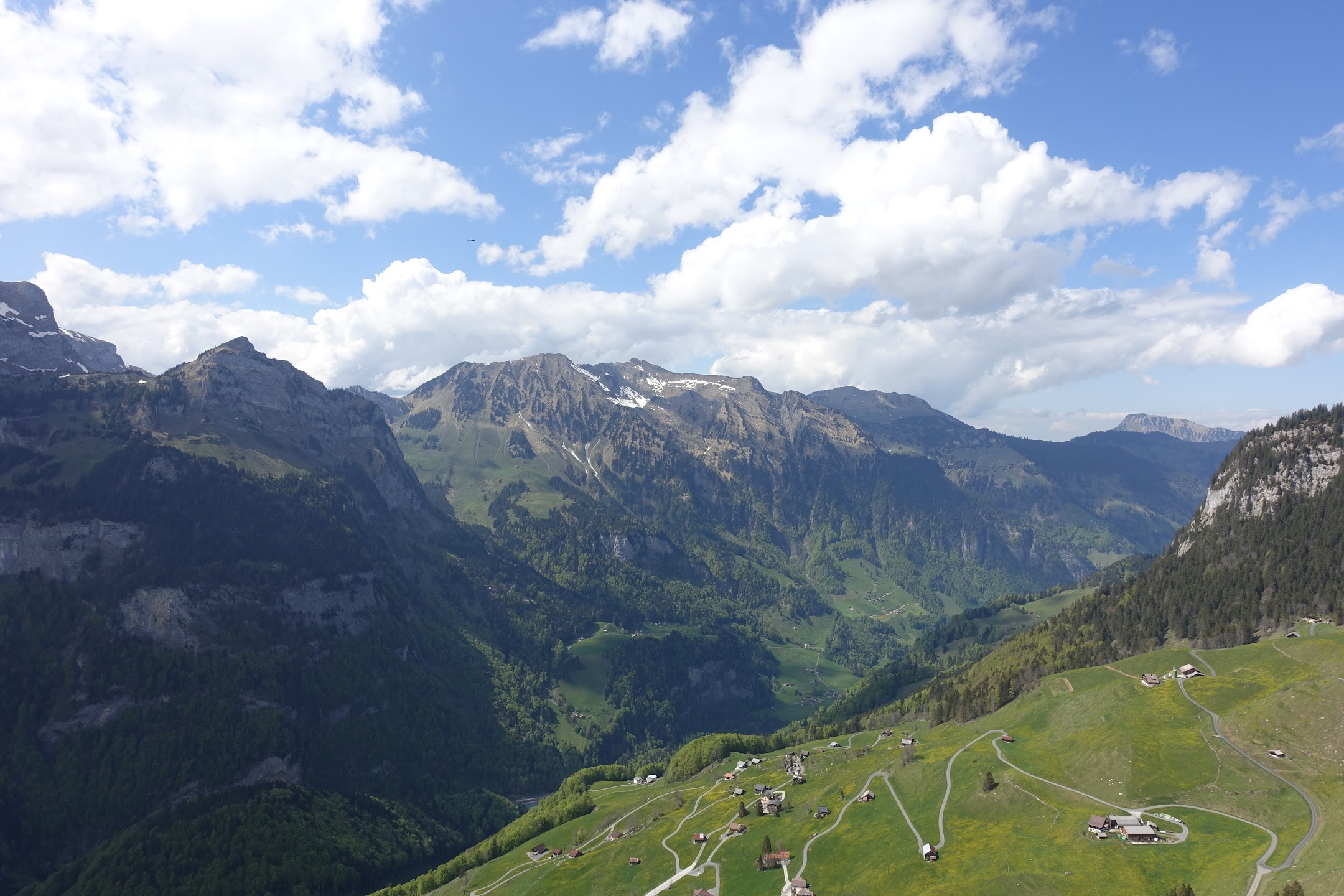 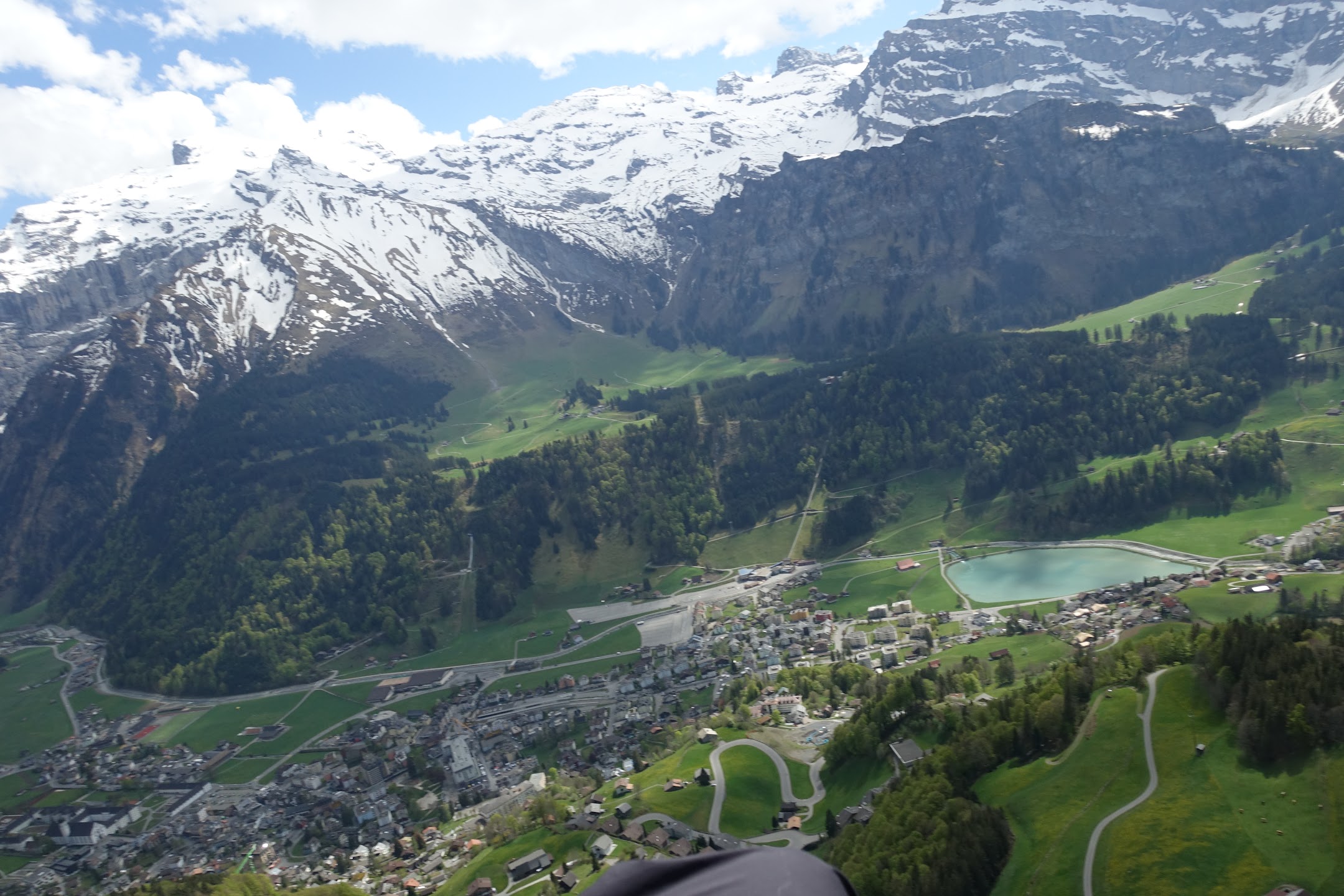 The only advantage of no thermals was that I felt stable to take out my camera and take some pictures.

An hour later I met with Tobi, he managed to stay in the air for 4 hours, while I hiked in total for 4 hours. He learned from my mistake and later reacted correctly to the change of wind and flew to another area.

But it was a nice endurance training for the season that comes now. And I learned a lot about Spring thermals.